We have our own answers here

When I first took my designs to Europe, I felt that I was bringing obscure oddities which, if I was lucky, a few people might like.

I believed that to really succeed internationally, you have to do international design. That was not my objective – I was just looking for a few more sales.

I was surprised to discover that what people liked most was the difference – to them it was exotic. It taught me a very important lesson: what we have here, our unique and seemingly idiosyncratic ‘localness’, is actually one of our greatest assets. And it is not just an artistic asset, it is also a social one.

Why do we persist in aping the US model?

Can we now accept that the American dream is over?! Fundamental to that dream is the premise that unmitigated business creates general prosperity. All statistics prove that it is now simply not true; there is no trickle down, only an upward sucking. Over recent decades the few very rich have got immensely richer, and the rest relatively and absolutely poorer. The middle classes are chained to working merciless hours with little or no holidays, just to keep up. The number of those below the poverty line in 2010 has increased to a scandalous 15%, or 46 million.

Unemployment is officially 9%  (22% for unskilled young and 14% for “involuntary underemployment”)  But unbelievably in America if you are unemployed for more than six months you are classed as a “discouraged worker” and struck off the register! There is an estimated 3-5 million of these ‘nohopers’ who don’t even feature as a statistic. The prison rate is by far the highest in the world, and you can still be murdered by the state. Its government has degenerated into a bickering mess of rabidly selfish obstructionists, intent only on protecting their wealth, pitted against the weak and ineffectual of a similar stripe.

So much for a wealthy, prosperous nation!! It may have an amazing list of achievements, but socially it has become a disastrous failure.

Yet here in NZ we hear the same old cries that we are lagging behind Australia, that Hawke’s Bay is lagging behind the rest of the country . . . we must improve our business, grow our exports, work harder. For what? To become like America?! Of course our business and political leaders say this because, apart from being one and the same thing, they are the few who will get richer. But do we have to be so blind as to believe them and work for them?

European settlers first came to New Zealand to escape constraining class structures. They created a pioneering egalitarian society that, as we all know, led the way in some human rights. What has happened to that? It has been systematically broken down by businessman/politicians like Roger Douglas and John Key pushing towards the American corporate model. There is no other reason for this than selfish gain for themselves and their buddies. Like America, those that vote for it sadly believe in the dream that they too can be
rich, though of course most won’t.

Take the kids fishing any day

We do have our own different models. People live in Hawke’s Bay, not to get rich, but to escape the treadmill and to find a more meaningful life, with time to take the kids fishing on any day. Most of New Zealand is like that. The people that work for me can take time off whenever they choose (as long as commitments are met) because family is more important. We are not lagging behind, we are ahead, with our own different values. We need to stick to them and not be diverted by calls from business. 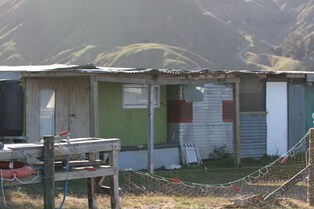 Also part of our culture is Mãori tikanga and the supportive strength of whanau. These traditions have developed in order to ensure their survival as a group, not as an individual. That distinction is critical: if we value the individual, most will be trampled on and cast out by the rich and powerful who write their own self-serving laws. If we value the group, as Mãori do, we care for all those in the community, and look after the weakest. Isn’t this a better model that any caring person would rather be a part of? Most of the smug well-off couldn’t care less.

Our local business leaders exhort us to export more. Why? Well, apart from lining their pockets, we have to pay for all our imports. What are they? Cheap junk that too often breaks on its first use? Addictive baubles that only leave us craving another seductive gadget as soon as we get them home? Badly made furniture from Asia that won’t last? Out of season foods? Sure, there will always be some things we can’t produce locally, but is it that much?

Why, for entertainment, do we buy monster TV screens to watch appalling American TV? Why don’t we create our own entertainment, and support local events more? Why are advertising agencies coercing us into funneling our dollars into international corporations? Why are they not using their creative energies to promote the local community?

“Up to $800 increase in cost to fly to Europe next year with new carbon accounting scheme” – said a recent news headline. Welcome to the future. Globalisation and ‘free trade’ are based on materials being carted back and forth across the globe in search of (temporarily) cheap labour. This is only possible while we use up irreplaceable and rapidly dwindling energy stored over millennia from decayed forests.

The full cost of pollution and carbon emissions is not being paid, but when it inevitably is, like the airline ticket, shipping costs will escalate and global free trade will become a dream of the past. Cheap wages in China won’t last as their standard of living and expectations continue to rise. Is this where our captains of industry want to take us? Out on a rotten limb that will soon break off leaving us dependent on exports and imports that have become prohibitively expensive?

The future lies in our local community, not in globalisation. Think about every dollar you spend – will it remain here or will it go overseas to a multinational? How do we create our own sustainable community model as an alternative to the self-serving and polluting corporate model constantly being rammed down our throats? I will write about this next time.

4 responses to “We have our own answers here”