The HBS Bank Weekend of Wonderful Workshops is the second such event to be staged, being held at Keirunga Arts and Crafts Society in Puflett Road from 30 March – 2 April. This year sees a
doubling in the number of arts and crafts workshops to forty over four days. For details: www.keirunga.org.nz

Names such as Wellesley Binding (painter), Kim Morgan (potter), Terrie Reddish (drawing) and Kathy Boyle (printmaker) and many others will tutor workshops in their chosen media. 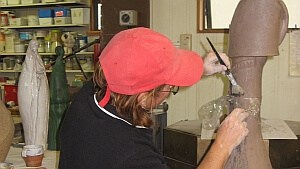 Keirunga Society president, Barbara Daniel, believes that this is an event that will grow in size with each year and attract new people to Keirunga. She cites the reaction to the inaugural event last year, where 211 people attended the 21 workshops, and of those, 70% were not Keirunga members. That Weekend ran over 2½ days and the feedback from participants was extremely encouraging – they wanted more this year.

Upon reflection, the event seems to mirror Havelock North’s interesting cultural past, when during the early twentieth century the ‘Havelock Work’ flourished in Havelock North offering regular plays, entertainments and social events.

Today, the Keirunga Gardens and the arts centre still provides a sense of purpose and a place to work and learn for the Keirunga Society’s 400 active members. Hastings mayor Lawrence Yule describes Keirunga Gardens as “the jewel in the crown” of our parks and this sense of pride and appreciation is shared by all who know it and use its facilities.

It is a fulfilment of the generous gift to the people of Havelock North by George and Elizabeth Nelson, original members of Havelock Work, who gifted the Keirunga Homestead and grounds as a centre for the cultural growth of
the community.

Hi-Tech in the Village

Sirtrack in Goddard Lane is a good example of the kind of high tech businesses which it is hoped will be attracted into the area under the new ‘Village Framework’ – due to be formalised into the Hastings District Plan later this year.

Sirtrack, which employs 30 people, has been developing and manufacturing their tiny radio transmitter technology at this location for 26 years. They made the tracking device that was attached to Happy Feet after the displaced, sand-laden penguin had been brought back to health and was released into the sea.

The Havelock North company is a world-leader in terrestrial animal and avian tracking devices, serving New Zealand, Australia and North America and owes its origins to the old DSIR, which developed monitoring technology to track the behaviour of possums to study their role in spreading tuberculosis in cattle. Former DSIR employees, Dave Ward and Kevin May set up the business in the mid-1980s, using this technology as the foundation for a wider purpose – monitoring the behaviour of kiwi and other birds under threat of extinction.

The Sirtrack company has recently been bought by Lotek, a similar business based in Canada, which specialises in tracking undersea mammals and fish. This is a happy union with the two companies offering complementary products and services and merging their research and development knowledge and technology. Their website is www.sirtrack.com

The main roads of Havelock North are blobbed with plastic safety barriers, an indicator that UnisonFibre is well on its way to completing its installation of the fibre-optic cables that will transform broadband services for businesses in the area (refer to Beyond the bandwidth blues in the Jan/Feb BayBuzz).

Some of the network is operational, with Unison customers already experiencing the benefits of fibre – faster speeds, more reliability and consistency of connection, plus the ability to use better services like “cloud” based software.

The UnisonFibre network has been designed and built predominantly for business and the network is covering the majority of the Havelock North business area; but will not be connecting to households. They are building into all of the main business areas in Hawkes Bay and work with Centralines in Waipukurau and Waipawa.

The fibre is being installed using various technologies. Sales and Marketing Manager for Unison, Wayne Baird informs BayBuzz that where there are overhead power lines it will be installed on the poles. There are various techniques of undergrounding used from directional drill and thrusting, to open trench for where there are many services in the ground already. Generally the fibre will be “blown” down small ducts to get to customers’ premises. This technique allows for easy splicing and maintenance of the network. Here is a link to a video of fibre being blown – http://www.youtube.com/watch?v=4143NcqxRQ0 and for more information go to: www.getonit.co.nz