The Brat Kids Fight Back

In the last edition I wrote about the way in which we can regain control of our lives and build a strong, mutually supportive local community.

I suggested how, in doing so, we can shut out the parasitic multinational businesses that care only for the profit that they extract from us. I characterised them as Brat Kids in my first article for BayBuzz because of the way in which they control governments for their own benefit.

To regain this control we have to ensure that as many as possible of the dollars that we spend remain within the community. That dollar in our pocket is mighty powerful, if we all work together. If nobody buys a company’s product, then that company is doomed. 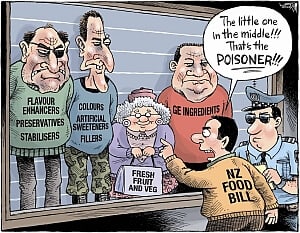 Of course, the big businesses are acutely aware that this is their Achilles’ heel, and are fighting back. They are doing all they can to influence the law to reduce our ability to resist them. Hence the Food Bill currently before Parliament. Last year it was quietly being worked through the process, until suddenly news of its implications went viral on the internet just before Christmas.

It is inevitable in situations like this that there will be some over-excitable conspiracy theories, but I think that anybody who examines the issue carefully will have some cause for concern. To me it appears as a classic case of “Disaster Capitalism” (as described by Naomi Klein): use an issue about which there is genuine concern or fear (being poisoned by bad food) to shunt through insidious laws that are un-democratic, and which would have no hope of acceptance on their own.

Food Minister Kate Wilkinson disingenuously asks, what is all the fuss about? . . . it is only aimed at protecting us from food poisoning of one sort or another. She comes across as so-oooo concerned about us and our health, with the added implication that if you oppose the bill you could be responsible for a child being poisoned.

If that is the case, then why were seeds for propagation originally included under the bill, which would have severely limited our home growing of vegetables? (Some people have claimed that the bill is so vague that even water could be included.) Oh, sorry, that was a mistake, Kate Wilkinson claims, admitting it was not so harmless after all … the seeds were “inadvertently captured” and that provision is being removed. But if the bill had remained un-noticed and slipped by, that part would have become law too. Who put it in in the first place, and for what reason?

If she is really concerned about public health, then surely there are far more important food issues that need urgent attention, such as:

But none of these issues will be addressed by the National government because they all relate to big, usually multinational, businesses making large profits out of us. In the neo-Liberal distorted worldview, ever-bigger companies pumping up economies and GDPs justifies almost any measure. So it is more in the government’s interests to go after the small fry, to restrict our autonomy and force us by rule of law to use our dollars to buy from their mates, not from ours.

How can you possibly justify making rules to regulate someone who makes jam or chutney at home then sells it at a market, and not take on the infinitely more serious issues at stake?

If you are concerned about how you will be able to buy your food in the future, check out the food bill and decide for yourself. And watch out for the big seed businesses trying to stop us using the seed we collect from our plants, and coercing the law into forcing us to buy theirs.

3 responses to “The Brat Kids Fight Back”