The best years of our lives

As they reach 65 and move into the later decades of their lives, the challenge for business and central and local Government, will be to minimise the disruption caused by their wake and to fully understand the shape and nature of the changes New Zealand Baby Boomers will create around them. 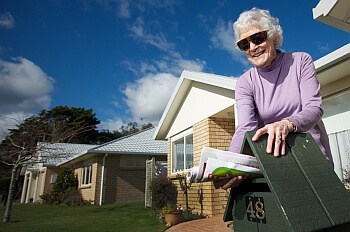 Researcher Sharon Buckland provides a rosy picture of the attitudes and expectations of this cohort in her extensive study entitled the New Zealand Boomer Dreams Study 2009. She notes that the profile of the Boomer cohort is vibrant, adventurous and searching and that Kiwi Boomers don’t see themselves as ‘old’.

They have no intention of retiring; they intend reinventing their lives and the concept of work to suit their lifestyles. Life for them is a never-ending search for meaning and self-actualisation; wanting to enjoy every moment of the rest of their lives to the fullest, on their own terms; and to leave the world a better place when they die.

Given gloomy predictions of earlier forecasts, it is reassuring to note that they have no intention of ‘sponging’ off the young and expect to pay their own way all their lives.

This sounds fantastic and one would like to believe that Boomers aged between 50 and 65 are making plans for a fulfilled and secure future. But probably many just hope for the best. Realistically, we may expect the best and plan for it, but change is with us whether we like it or not. We resist the very idea of change, and the older we get the more terrifying it becomes.

Change can come in an unpredictable way and sometimes with frightening suddenness. When my husband died at the age of fifty-nine, for me it was like falling into a void. In my case, I was young enough (56) to make a new life here in Hawke’s Bay and in a relatively short time made new friends. Over the next years I would travel; grandchildren were born; I found exciting new interests; enjoyed my growing family; and thought long and hard about preserving my finances and maintaining my house and garden.

But time moves on, and needs change. Take housing, for instance.

A decade down the track I am beginning to think about my housing needs for the next twenty years … something smaller, easier and cheaper to maintain. I’m thinking that too much money is tied up in this place and that the garden is too large and it needs constant work.

So, I will have to face up to another change; which means I’m interested in what housing options are on offer – the small townhouses, the retirement village, or a cottage. Whatever … it should be in the swim of things close to town, a small place, affordable and charming.

Where shall I live?

The Summerset Retirement Village in Ada Street, Parkvale is a possible option. Typically, this, like many other retirement villages, is designed as a community, with small townhouses of various formats, all making the most of the lie to the sun and with central facilities such as a café, gym, library, salon, spa pool and bowls and petanque court.

The houses are placed in attractively landscaped grounds, with trees recently planted that will mature, further enhancing the landscape. The site has long views to Te Mata Peak and to neighbouring orchards. I’m impressed and so are the people who live there.

Residents buy a ‘license to occupy’ which means they don’t own the asset but will be recompensed the original value when the house is vacated – less a fee to cover refurbishment. In addition, residents pay a ‘management fee’ that is currently set at $107 per week and calculated to reflect the value of National Superannuation – it covers costs such as insurance, rates, house and garden maintenance.
Needy residents are supported in their own homes with meals and personal care, which means they won’t need to move again. This is in line with how Government sees the future for Aged Care – that is to keep the elderly living in their own homes.

The problem with the retirement village located on the edge of a suburban area is that when the residents are no longer confident drivers they are too far from town to spontaneously walk to the shops and are dependant on the Summerset bus. 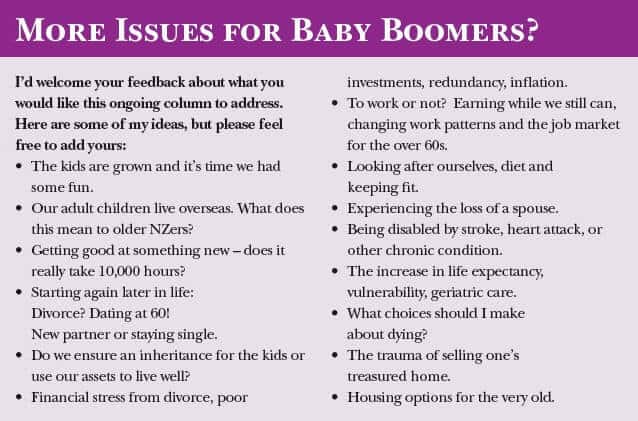 There is also the widely held perception that this is an option for old people and, as we know from the Dreams Study, Boomers do not see themselves as ‘old’. However, the people I met at the Ada Street Summerset love it, and for them life goes on as before, but with a lot less hassle and more security.
My personal preference would be a small but well-designed townhouse close to town or a natural amenity, with natural light and warmth from the sun and a small private garden or courtyard. I have seen a good example in the John Scott townhouses in Albert Street, Hastings that back onto Windsor Park and built in 1977. However, they don’t come on the market very often and it appears from my enquiries of the real estate market that they are pretty much unique in their compactness and appeal.

Perfectly located in the centre of Havelock North village is the cluster of St Columba’s Close houses designed by Sir Miles Warren, which are small and charming with their creeper covered walls. I love the fact that living here, one could slip out to the library for a book, wander around to the cinema to catch a movie, or have a latte at one of the cafes in Middle Road. Something like this could be my dream house for retirement.

Step up Andy Coltart! Andy has a vision of town living that is based on the urban charm of the old towns of Europe, but with a New Zealand character. He and his son, Will, have been working on a concept that is intended to fit the needs of people with dreams like mine.

They own the best part of a one hectare area on Joll Road, bounded by Campbell Street and the Havelock North Primary School, including the site where the coffee shop Ya Bon is located.

Whilst the buildings have not been designed yet, the Coltarts are developing a layout of small privately-owned townhouses, with retail shops on the frontage of Joll Road, and apartments above. An access lane will curve through the site to serve about 30 smallish residences with courtyard gardens offering privacy and landscaped open spaces.

Land doesn’t often become available in the centre of town and this project coincides with Plan Change 54 – the Havelock North Village Centre – instigated by the Hastings District Council to rezone this area. In 2008 the Urban Design Framework identified this site as a key development site, with the potential to provide medium- to high-density housing and a smattering of retail in the heart of the village.

The intention is to retain the ‘village’ character that is acknowledged as being so important to the people of Havelock North. This is now part of a Plan Change that will be integrated into the Hastings District Plan.

Knowing what your options are is always empowering. Facing up to significant changes such as giving up the home you love is easier when you feel in charge and you have the time to work through the adjustments needed, mental and actual. I have time to make this transition and I think I am going to enjoy it.

For those requiring care, other choices must be made regarding living arrangements. We’ll look at those another time.