The Pleiades stars are easy to spot in the crisp, clear north-eastern skies of late May or early June. They have other names. One is Seven Sisters, another is Matariki, the Mãori word for New Year.

Traditionally, Matariki was regarded as the optimum time for planting crops. The brighter the Pleiades the better, because that augured well for a warm growing season and good harvests. 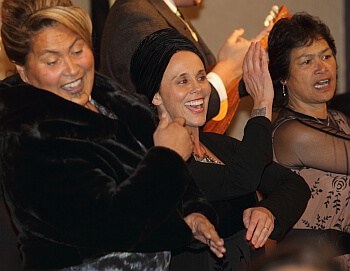 Matariki no longer has quite the same horticultural focus, but it is still an important date on the Mãori calendar, and gaining prominence in the mainstream as a time for celebration, taking stock and making plans.

In that spirit, an extra set of Matariki stars was nominated this year, not of the heavens but of terra firma and earthly endeavour.

These stars were people brought forward by their communities to be acknowledged as champions of everyday life; for walking the talk, doing their best, and making life better for those around them – as Living Taonga (treasures).

The concept obviously touched a community nerve, for nearly 50 nominations flowed in across the six categories. From them, four judges selected seven Living Taonga for recognition.

They received their awards on June 16 at the Hawke’s Bay Opera House Assembly Hall during a Matariki gala dinner, in front of a large and sparkling audience who added plenty of spontaneous oratory, laughter and music to the ceremony.

The ethos of the Matariki Living Taonga Awards may have been far removed from the elitism of competitive sport, business or movie awards, but they lost nothing in translation.

As Taiwhenua chief executive Alayna Watene remarked, the awards and the evening were all about “a celebration of traditions, language, spirit and people … We owe it to future generations to start showing leadership and share our stories with ourselves first and foremost. This gala dinner is the time to celebrate each Living Taonga’s own personal journey.”

An ardent conservationist, Jenny’s activities have included dune restoration, bird relocations, and carrying out trustee duties with a range of environmental organisations.

Has operated his business, P and T Contractors, in a specialist industry for ten years, applying the true value of whanaungatanga. He is a trusted employer who engenders loyalty and provides job security for his 15 permanent staff.

Tangiora has the distinction of being 102 years old and a full-blooded Mãori. An avid hockey player in her younger days, she lived for many years in the Waipatu township, where she worked hard to support her whãnau and community. Tangiora has three whãngai children and many mokopuna.

Often referred to as Mother Maere, Tata is a woman of strength and courage. Now 93, she still visits friends and attends meetings, birthday and celebrations, always looking for opportunities to give, share and offer herself to the community.

Trained expertly from a young age by two master carvers – both experts in whare tipuna and waka building — Takaputai is now a passionate teacher passing on his knowledge and precious skills to younger generations.

A self-taught and fluent speaker of Te Reo, Kotuku has willingly shared his talents and skills with a wide range of people, using ‘the back tractor-shed at Waipatu’ as a place to set many others on their own personal journey of learning Te Reo.

A gentleman with 80 years and many stories behind him, Hemi has worked quietly and given his time, support and aroha to others through huge involvement in the church, community and education.