Best years of our lives

While the Baby Boomer cohort moved through middle age and towards retirement, their offspring, the Generations X and Y were educated, became grown-ups themselves, established their careers, and took on responsibilities. 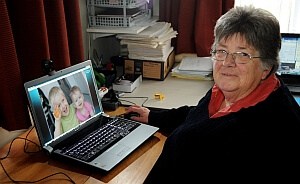 Skype to the rescue for Marj Cox!

At some point, most of them will have left these shores, and many will return to make a life in New Zealand. The growing number of those who do not return will be establishing themselves in other parts of the world, leaving their parents to watch from afar.

In this feature we look at three families and the implications of this common experience. It has happened before, of course, although previously the movement was in the other direction and more complete – the migrations of the 19th and 20th centuries.

The economic boom of the latter half of the 20th century saw middle-class New Zealand grow, along with expectations of a comfortable life and a university education. These educated couples expected the same and better for their own children, who, with an ambitious start quickly find that New Zealand cannot fulfil all their education or career goals, so they leave and do not return.

It is not just the high flyers who are leaving permanently for work opportunities overseas. Nurses, tradesmen and other skilled New Zealand workers are taking themselves to Australia and elsewhere, chasing better wages and a lower cost of living.

Richard Mayhew is a local boy who had a way with words. He went off to the UK to study journalism at the London School of Economics where he met and married Chris, also a journalist, and their young family grew up in the London suburb of Twickenham.

When their two children were about to start their secondary education, the family returned to New Zealand where Richard took a sideways step, acquiring a post-graduate teaching qualification, and finished his career teaching journalism and broadcasting.

Their two children returned to Britain for their university study. Their daughter, Rachel, is a successful fashion designer; son Alex, is also a journalist, working in television news with the BBC in London. He is now married and has a baby boy. They are both fulfilling the proudest expectations of their parents as leaders in their chosen professions. Chris and Richard are very excited about the new baby and are off soon to meet their first grandchild.

Which brings us to grandchildren

It is an awesome thing to be a grandparent. I have long believed there is an evolutionary reason why humans live long after their breeding years: simply, the more caring adults available to raise a young family, the better the survival rate.

Generation X made us wait a long time for our grandchildren and while we wait, the ‘grandy’ version of the biological clock ticks. People who have launched their own children into adulthood with a wave and a sigh of relief, are amazed at the strength of emotion they feel when they hold their first grandchild.
As the grandchildren grow we happily babysit, cuddle them and play games, and during school holidays pass on our skills, share our values and life experiences. We love them unconditionally, knowing they are going back to their parents for the hardest work of rearing them.

That is, if they live here. But if they are overseas we are not a regular part of their lives. We reconcile ourselves with thoughts of regular visits and opportunities for travel, or for them to come back here when the littlies are under five. But once the grandkids are into formal education, such opportunities are brief and rare. Happily, but only to a degree, grandparenting instincts can be redirected to other people’s grandchildren, helping with reading at the local primary school, supporting the local junior footy team, or, in the case of a second marriage, loving your step-grandchildren.

The Freemans have two children. Their son is a professional sailor and lives in Stockholm with his Swedish wife and two little girls. His work is crewing in the America’s Cup or skippering a billionaire’s super-yacht in the Caribbean. He yearns to return to the Bay to live but it is extremely doubtful that this will ever happen. Their unmarried daughter is a marketing director for a world-wide hotel chain based in Sydney, where she owns a townhouse. She gets back sometimes for weekends. 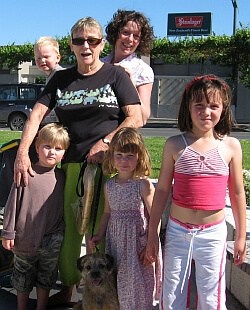 Carole, now 67, lost her husband David two years ago to cancer and is struggling with their rural homestead and property. She has no desire to travel to Sweden, is fearful of change and is isolating herself into a narrow life of house and garden maintenance. Neither she nor her children want her to sell up the family home and move to something smaller as it has such significance for them all.

An engineer, David had loved his work and had paid handsomely for the best education for his children, while Carole kept the home and family life going. He died at 73, still in the saddle, and, at a time of great shock and grief, his wife had the task of winding up the business and laying-off his employees. Their son flew home from Sweden on the day before the funeral and returned to his young family grief-stricken and feeling anxious about how his mother would cope.

After the Second World War, Monica married Bill and they settled in rural Hawke’s Bay on the family farm. With hard work they made a very good living, raising four children who received a good education at schools in the Hastings district. They were encouraged to be independent, to get qualifications, get married and make successful lives for themselves. This they duly did.

When the farm was sold in the 1990s, Bill and Monica built a fine house on Napier Hill with views to the ocean and a large landscaped garden. They had several spare bedrooms for accommodating the family on their visits to the Bay, but they were rarely used.

Bill died twelve years ago and Monica is on her own, aged 89 years. None of their children live in Hawke’s Bay; they live in other cities, in other countries. Her two eldest children, now in their 60s are rarely in touch; but the younger two who live in London and Perth keep in regular contact via Skype.

When Bill died Monica was fit and independent and was able to afford to pay for help in the house and garden. She is a proud woman with enormous reserves of courage and independence. Over the last couple of years she has lost condition following a couple of falls. She recovered from the broken bones and has managed incredibly well, her routine has carried her through, and, accidents aside, she has been able to continue to drive.

Her affairs are managed by her solicitor and accountant. She has a lifetime’s collection of beautiful and treasured possessions and frets about who should get what upon her death. The thought of disposing of them so she could move into aged care, though a sensible option, is just too much for her to contemplate.

The three family stories above illustrate the relentless march of age upon the circumstances of later life. These stories will be multiplied as the Boomer population ages. Health and welfare planners must be biting their nails.

It is therefore essential our society debates the bulge in demand for suitable living accommodation for the elderly, their socialisation needs, and the increased numbers of care workers required to look after elderly Boomers before the ‘tsunami’ is upon us. I will be looking at this in a future edition of The Best Years of Our Lives.

Families need to plan ahead for the day when the parent-child roles reverse and their parents (especially those who are isolated from their families) need support. It also behoves the aging Baby Boomers to take early responsibility for their own living and care provision before it becomes too hard, lonely or unsafe, so that their middle-aged children (or caring neighbours) are not constantly anxious for their welfare.

Closing our eyes to aging is an unacceptable option.

Correction: In the last edition of Baybuzz I inadvertently referred to St Columba Close. I should have said St Lukes Close. Sorry, a senior moment! KB