Prior to Pakeha coming to these shores Ngãti Kahungunu was commercially focused, as were all iwi.

We traded and bartered with each other and there was a small but definite trade trail back into the Pacific selling pounamu for kúmara seed and so on. Indeed our journey from Asia 3000 BC into the Pacific was based on trading and discovering new commercial options, as well as fulfilling the adventurous curiosities of our forebears. 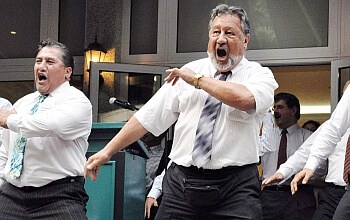 Once Tasman, de Surville, Cook and others arrived, we traded with them and developed supply chains from the earth to the girth, from the water to the waiter, from the gate to the plate. Colenso wrote: “I hesitate to report the size of the harvest of the Heretaunga natives lest I not be believed.” Or something like that … but the point he was making was that the industry here was thriving without too much intervention from anyone else.

Mãori were understanding these new markets and their needs and had been geared to meet them, including taking out loans and investing in the latest equipment and transport. Te Hapuku owned sailing trading vessels as did Karaitiana Takamoana and they plied the coastal waters both north and south opening and exploring new markets. Karatiana’s ship ‘The Henry’ ran aground in the Marlborough Sounds after picking up a load of oysters, mussels and scallops to carry to the markets in Wellington.

Te Hapuku was thinking about a push into Australia when the forces of the Settler Government torpedoed Mãori commercial aspirations by the introduction of the Native Land Court and the Oyster Fisheries Act. This resulted in a massive land grab and a ban on Mãori commercial fisheries by lawmakers backed by one of the most powerful military forces the world could muster. RaNgãtira of that era were reduced to mitigating the impacts of colonisation on their people, but suffered great loss of their own personal mana, hence hapú and iwi mana.

Today, we are still trying to shrug off the impacts of that terrible period when the entire weight of the British Empire was forced into our ways, traditions and culture. Today, most Mãori activity is limited to social issues such as welfare, job-seeking, Corrections Department, benefits, anti-violence and anti-drugs education, health catch-up, and the like. This has emerged after decades of mere survival as a race clinging onto language, land and lasting faith that things would get better. And it will.

As the British Empire teeters, and so too its allies under the weight and waves of corporate corruption and privilege, a new and better system is emerging. And here it’s based on the collectiveness of the willing, which whãnau, hapú and iwi gravitate to naturally. Mãori will add value to reviving the flagging fortunes of the provinces and the country by using our collective resources to thrust into new markets, particularly in Asia and the Middle East, using our unique cultural connection to pave the way.

But it will take a whole generation to make real change, as the key to sustainable business is high quality human capital or peak performers … or to us, rangãtira standing and delivering in the market places of the country and the world.

Trading into the ozone

Last week I returned from a two-week trade mission headed by Minister Dr Pita Sharples. We toured five major cities in China, including Beijing, where we met Vice-Premier Hui Langyiu in the Inner Sanctum of the People’s Republic, a place where very few people are ever hosted. While in Beijing, Sir Wira Gardner signed a deal worth millions on manuka honey. Then onto Shanghai, meeting with the Chair and Board of the China Development Bank, who have interests in rebuilding the whole of Christchurch, and who also could be interested in investing in timber mills in Taupo, Murupara and Kawerau. We also met with the Penxin Group who have interests in more than just the Crafar Farms and want to work closer with Mãori.

There is no lack of interest in red meat and fresh or frozen fish, kiwifruit or apples, and many talks were held about going from the gate to the plate eliminating middlemen, which requires scale on our side. But we had delegates in our group that equated to about $5 billion of primary assets, including the Mãori Trustee, Ngai Tahu, Ati Hau Inc, PKW, CNI Forest Inc, AFL, TOKM, and of course Taine Randall representing Ngãti Kahungunu.

In Guiyang City, which comprises 17 ethnic minorities and has a provincial population of about 40 million, we discussed educational exchanges and bilateral agreements between their universities and our wãnanga. In Guangzhou City, which has 12 million people, Whalewatch Kaikoura made huge impressions and inroads with China Southern Air, which is the fourth largest airline in the world. And NZ Mãori Tourism is doing a joint venture with GZL, a company that arranges 2.5 million tour packages a year.

Onto Jiangmen City, where we were promised an office and support personnel by their vivacious mayor, if we establish ourselves there as a group. Jiangmen has 4.6 million people and is a hub for sea, rail and road transport. Shenzen has 12 million people and we met Mr Ren there, owner and executive-chair of Huawei Industries, which make cell phones to seabed cables to satellites, and have 40,000 people working in their local campus (they are partners with Mãori in 2degrees Communications). Then onto Hong Kong, where Dr Sharples was welcomed by the CEO of Hong Kong like a long-lost brother and trade talks went into the ozone.

Yes, we can once again occupy this commercial arena, but it will take collectivity and longevity of thinking rather than just one-off deals or trade ventures. And it’s more than just moving product; it’s more about moving people’s understandings of each other. That is the key to future success.

It all starts with quality education of course, which has not been a priority for many Mãori or mainstream schools. We know the negative stats that drive us all mad.

So we as Ngãti Kahungunu need to demand higher, quality-driven education outcomes to at least level 4 status for all. Because evidence demonstrates that those that leave school with a level 2 qualification will gain a job, but those with level 4 plus will create jobs. We need to be in the job creation arena, growing jobs for whãnau and others in our communities.

When we become employers and entrepreneurs again in massive numbers, then we will be going some way toward recapturing the mojo of our intrepid trading tipuna … who knew no other way.