On the last ocean voyage on our yacht Hornpipe, our compass turned out to be useless and we nearly ran into North Cape in the dark.

We had just undergone a major refit, which included welding a new rub rail all around the top of the steel hull. I had swung and adjusted the compass to allow for the altered magnetism of the boat, but stupidly only while upright. Now we were hard on the wind and heeled well over. There was a massive and unknown compass deviation causing us to steer completely the wrong course.

Luckily I had been reading about how the Polynesians navigated without instruments, and we still managed to find New Caledonia using the wind, swell patterns, sun and stars as a guide. 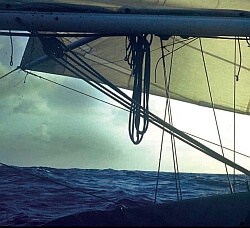 The sea has long provided our language with a rich source of metaphors, and the compass is one of them. As we voyage through life, what are our guides? There are many, but crucially important is a set of morals.

It is my contention that our moral compass has swung too far towards ‘me’ and one of the causes is an over-emphasis on money.

A story is told by Michael Sandel in his book What Money Can’t Buy which illustrates the difficult relationship between money and morals. The Swiss use nuclear power to generate electricity, so they also need to dispose of the nuclear waste. A suitable mine site was found in the mountains and, prior to the final decision, the neighbouring village was polled for its attitude. The Swiss being a socially responsible people, 51% agreed to accept the mine. Even though I am sure no one wanted it, they acknowledged that they use the power and were resigned to their civic duty.

Then they were re-polled, but this time they were also offered an annual payment if they accepted the disposal. Those in favour dropped to 26%! Increasing the payment changed nothing.

When there was no money involved, the slim majority of Swiss villagers were guided by their morals. But the introduction of a payment was seen as a bribe, as a form of inducement. They no longer needed to exercise their difficult moral duty. Money encouraged selfishness. Too much emphasis on money becomes a critical mass, which causes serious deviation to our moral compass, pulling us off course into a dangerous future.

I was reminded of it recently when I was approached by a business-mentoring scheme. Looking at their website it initially seemed like a great idea: local business managers got together to share their experiences and to help each other. But then I reached the page that listed a significant cost, and my enthusiasm evaporated. The inclusion of money destroyed what I had hitherto seen as a spirit of mutual cooperation and generosity, turning it into a profit-making machine for someone else.

Money at the expense of community

Of course we all need to make a living, but I believe that money has infiltrated our society too much, at the expense of our sense of community. The last 100 years have seen incredible progress in the comfort and standard of living of most people in the world (unfortunately a lot more for some than for others), and that is a great thing. But anecdotally, there seems to have been a stronger community spirit in harder times. 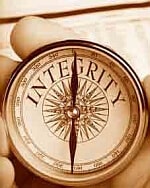 In my youth I was close friends with an old Geordie who had grown up through the Depression in northeast England. He told me many stories of the deprivation they suffered, but also of the rugged strength and spirit of their communities. Other social injustices – such as slavery, segregation and apartheid – were conquered by enough people coming together and standing up for what they believed in.

Today global warming is shaping up to being one of the greatest social injustices of all time. On our current course it is very likely that our selfishness will deny future generations (of both humans and other creatures) the abundance that we are lucky to thrive in now. Morally, surely no one would disagree that this is desperately wrong.

And yet why are there so few people standing up and clamouring for change? Is it because our moral compass has been swung off course and points more towards ‘me’ than to the wider community, which includes our descendants? Have affluence and toys bought off our morals? When did anyone last do something voluntarily that was for the benefit of others and against their own interests?

A hot environmental issue in Hawke’s Bay is hydraulic fracking. There is a strong case against it because of its uncertain risks. But at a recent meeting of opponents it was suggested that we widen our opposition to all local oil drilling. This is typically selfish ‘me’ behaviour: I use oil but someone else can have the pollution. Like it or not, we are all dependent on oil and, like the Swiss, have to accept the consequences. The best we can do is try to minimise our usage and push for the safest extraction.

Governments twist morals to suit their own interests. The Americans, Russians and Chinese refuse to sign the Global Armaments Treaty which would reduce senseless killing as in Syria. They deviously try to justify it, but the reason is simply that they are making too much money from arms sales. If they just came out and said that we are in the business of selling weapons and this is not in our interests, I would respect them more.

Such a model of disingenuousness is copied right through society as people find ways to justify what they are doing, often in terms of their ‘right to happiness’. Why restrict yourself for some old-fashioned community moral when you can ignore that and do better like everyone else seems to? But is your happiness acquired at the expense of someone else’s? For a caring person with morals, that would no longer be happiness.

The pleasure of doing things for one another

One way out of this is to reduce the power of money.

Next summer we will hold a ‘Repair Fair’ at our base in Whakatu. Everyone will be invited to bring in old broken items of furniture, clothing, jewellery, whatever. Craftspeople on-site will creatively repair and rebuild these things. Visitors can watch the process while sampling local food and listening to live music. At the end of the day they can either take their piece or leave it for someone else. A koha box will go to a local charity. No one there will be paid for their time – they are volunteering for the community. So this is done entirely for the spirit of the occasion and there is no money involved to deviate the compass.

Can we build more community activities that deliberately shut out the profit motive, and replace it with the sheer pleasure of doing things for one another?