The Best Years of Our Lives

Happiness in the Third Age

It seems that we in the Western world are obsessed with happiness. Social scientists in universities around the world are trawling through data to present their conclusions about the ‘keys to happiness’.

One of the findings showing up amongst the research is the ‘U-bend’ phenomenon. The theory goes like this. As young adults we are striving and optimistic, expecting a great future, full of energy, looking for fun and love. It’s downhill from there in the middle years until we hit the mid-life crisis at the average age of 46. Then, after 50 life seems to get easier as we accept what we have made of our lives. 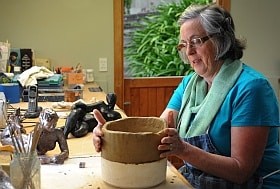 In a recent study from Stanford University, Laura Carstensen, a psychology professor and director of the Stanford Centre on Longevity, writes, “As people get older, they’re more aware of mortality, so when they see or experience moments of wonderful things, that often comes with the realization that life is fragile and will come to an end. But that’s a good thing.” It focuses the mind.

Older people may have lost their beauty and gained some wrinkles, but they have gained optimism and a feast of rosy memories to sustain them, finding the elusive thing that is happiness they have been searching for all their lives.
Studies also show that on no account should older people act their age. As the saying goes, ‘you are as young as you feel’. What is seen as appropriate behaviour for older people is seriously limiting; if you think you’re old, you will be ‘old’ and with that comes the certainty that it is too late to start something new.

Engage the brain with something new

When I found myself unable to find satisfying work a few years ago I decided to give myself permission to live on my savings for a few years until the pension came into view.

Living frugally, I took myself off to art school at EIT in Taradale, and then built a studio because I needed a designated workspace. The art training gave me a kick start and my art practice developed from there. My interest was in creating ceramic figures that expressed the subtleties of human mood and movement. By repeatedly working at it, fresh ideas emerged leading onto the next piece.

Making art is serious fun and I admit that I am obsessed. I frequently awake with possibilities bubbling away in my head and I can’t wait to get into the studio to try them out. The time disappears and next minute it’s after 2 and I’m starving hungry.

Being good at something doesn’t just happen. It requires practice and a desire to keep on practising, not expecting a masterpiece the first time round and keeping an open mind to possibilities and new learning.

It is still early days but my work is selling in a few galleries and art exhibitions. To see them, visit:
www.kaybazzard.co.nz

Other passions, love after 60

For some of my contemporaries a new relationship is the source of renewed purpose and happiness. They have found second-time-round partners after age 60 through the internet or introduction by their friends.

At this age it is not easy to meet someone interested in finding a partner. It requires commitment to the match-making process, overcoming prejudices and engaging in some radical shifts in thinking. 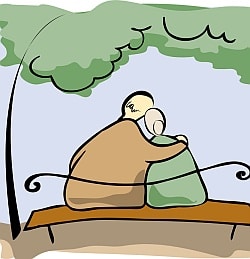 In the case of Fiona and Deborah this came after long periods of ‘recovery’ from former relationships – although we note that men usually move on much more quickly than do women.

Fiona married her internet suitor and they now live in Napier. Deborah has fallen in love with a man who lives in another city. They talk every night before sleep, regularly visit each other and ultimately, have plans to live together.

Both women had dabbled with internet dating sites with little success. However, when Alan contacted Fiona and they met, she had a strong feeling of recognition and realized the relationship could work. The first date lasted 13 days!
Fiona: “At our age you don’t mess around – and a few months later we were married. It seems to me that the ‘love’ one feels as an older person is tempered by experience, which tends to revise expectations [held as a younger adult]. Living with another person is also easier. In our case we are retired, so don’t have the pressures of jobs. We have fewer outside commitments, more financial independence and security, more tolerance for personal idiosyncrasies, and so on.

We are, in many ways, very different from each other, but can pursue our personal interests and even travel alone without the other partner feeling neglected or abandoned. Life is calmer. And, believe it or not, sex is better, possibly because we have more time for it.”

By contrast, it was important for Deborah to take time in getting to know her new man.

Deborah: “I didn’t want to rush into anything. I felt we needed to spend time just getting to know each other by being exposed to different situations, respecting the fact that he has his point of view and that I have mine and accepting that.

It was important to me that my adult children approved – but I just knew they would. Richard and I have similar values, sense of humour and enjoy the same things. It had to be someone who would fit well into my life; it makes the relationship easier. When you’re 60 there’s no time to work through a lot of problems, you don’t have the energy. It’s about finding the right one, and also, it’s about you being the right one.

Other couples may choose not to live together, instead, maintaining their own homes, getting together at weekends, taking holidays and outings, maintaining a romantic or companionable liaison not made routine by over-familiarity.

Then there are the individuals who are happily single after a long marriage ending in divorce or death. Their happiness comes from making a new life for themselves while rosying up the memories, valuing freedom of choice and self-expression, freedom from compromise and being answerable to no one.

I note from research that a long marriage grown dull from routine can be rejuvenated – by holding hands, gazing into each other’s eyes and changing habits. Well and good if it works for you, but happiness is what you make out of your life and it is never too late to change.

Happiness is an elusive notion. The word is too simple to cover the multiplicity of feelings and causes. However, one thing is certain: you are more likely to describe yourself as happy when you are over 50.