TAONGA MAORI connecting to place & past

Hawke’s Bay’s nationally-recognised collection of taonga Mãori will spread its wings when the new museum opens in September, as Lizzie Russell reports.

Beyond what visitors will see in the exhibition spaces, there’s much more to any museum, in particular our museum.
The team at Hawke’s Bay Museum and Art Gallery is on the home straight. Doors to the new museum are on track to open in September, and after nearly two-and-a-half years closed to the public, the pressure is now coming on to excite, engage and satisfy us with the new design, branding, gallery spaces, exhibitions and direction.

Since the museum closed to the public in July 2010 for the enormous task of packing and moving the collection to the off-site temporary storage and work space, the staff of around 30 has been working tirelessly to design and prepare for the opening exhibition programme. 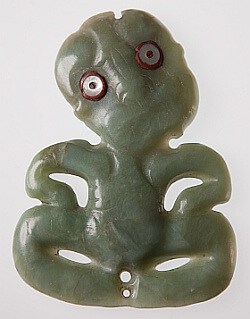 The fact that work has continued behind the closed doors, while the $18 million building project has been underway, is a timely reminder of what a museum really does. Not just a place for locals and tourists to visit to learn more about our history, our art, our heritage objects and our regional identity, a museum is also charged with being the home for our taonga, and for acting as a research base where specialist professionals explore and study this material and the stories or provenance that relate to it. Only a tiny percentage of the art and artefacts held in most museums is ever on display to the public, so the collection stores are veritable Aladdin’s caves of strange and wonderful remnants from our collective past.

Hawke’s Bay Museum and Art Gallery is no exception, with a holding of approximately 100,000 items, including archival material. HBMAG Access team leader, Sara Browne estimates that in recent times, between 5% and 10% of the collection was on show. This is in line with most other New Zealand museums, she says. What we’ll see in the new museum is an increase in this percentage, due to a new approach of changing exhibitions over more regularly, and changing art and objects within the show more often too, giving the public the opportunity to see more of that material culture and fine art which helps to define our regional character.

Access through the web will also increase, Sara tells me. Members of the team have been busy photographing and documenting collection items, and we’ll see the benefits of their labour when the new museum website is launched next year, with around 7,000 images of art and artefacts viewable online, as well as details of the items held in the extensive archives collection.

The HBMAG redevelopment has been sold to the public as “repackaging the exterior to match the wealth within”. What the marketing speak is getting at is the incredible depth, breadth and strength of the collection which is governed by the Hawke’s Bay Museums Trust.

Probably the most significant collection within the overall is that of taonga Mãori. Hawke’s Bay is home to New Zealand’s third largest iwi, Ngãti Kahungunu, and HBMAG is home to one of the country’s largest collections of taonga Mãori. The collecting of taonga Mãori began in earnest in the middle of the 19th century, as members of the museum, then known as the Athenaeum, pursued their interests in all things indigenous and relating to the natural history of these islands.

It is widely known within the heritage sector – especially by those who have worked at or are working at HBMAG – that our local taonga collection is probably the finest and most significant outside the major museums in Wellington and Auckland.

As in the previous museum, the upgraded HBMAG will feature a taonga Mãori gallery. The last exhibition – Ngã Tukemata – The Awakening – which was curated by Sandy Adsett in 1986 came hot on the heels of Te Mãori, the internationally toured exhibition of New Zealand’s indigenous art. This not only put historical Mãori art on the global map, but also presented the work as fine art, rather than ethnic curiosity as it had been seen by the wider world in the past. Representative of a significant and specific era in terms of how New Zealand and the world regarded Mãori art, the HBMAG exhibition and its space remained largely unaltered for a lengthy period of time.

The exhibition was revitalised in 2001 in a project instigated and managed by Margaret Cranwell (at the time Exhibitions Manager at Hawke’s Bay Cultural Trust) in consultation with Sandy Adsett. Josephine Hughes, who was then the museum’s Exhibitions Officer, designed the changes, which included commissioned contemporary artworks by Bana Paul, Rangimoana Raureti and Jacob Scott. The refreshed  Ngā Tukemata  reopened in May 2001. 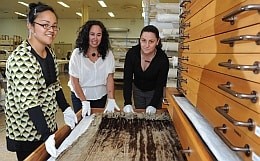 Following up Ngã Tukemata with a new exhibition for this era is now in the hands of the new taonga Mãori team at HBMAG. Curator Migoto Eria (Ngãti Pahauwera), designer Desna Whaanga-Schollum (Ngai Tahu Matawhaiti) and kaitiaki (collection manager/guardian) Tryphena Cracknell (Ngãti Hikairo, Hinewhata), have all come on board during the last year or so in a move that suggests a major shift towards placing increased permanent importance on this special collection.

All three are young, professional and passionate about the future of the collection. Migoto has a background in Mãori publishing, working at Learning Media in Wellington, while Desna has worked as a designer and branding specialist and is Co-chair of Ngã Aho, Mãori Design Professionals Society, and Tryphena, from an education and museums background, has focused for the last two years on research and collection care, establishing and strengthening iwi relationships. All three whakapapa to Hawke’s Bay hapu, and so have a very direct connection to the treasures they are charged with looking after.

When BayBuzz visited Migoto and Desna at the temporary museum base in Napier in November, they were keen to explain the shift in direction signalled by their recent arrival. Whereas in the past, the museum’s relationship has mainly been with local iwi as an external entity, the establishment of the taonga Mãori team – committed professionals who are of this place – creates a more seamless Mãori presence within the museum.

This is augmented by HBMAG’s ongoing consultation with two formal local iwi groups – the Mãori Consultancy Committee of the Napier City Council and Te Rõpã Kaiãwhina Taonga, a group that advises on spiritual matters (tikanga) relating to the taonga Mãori collection.

So what can the public expect from this new focus? An engaging new taonga exhibition, for a start. While the previous show was made up of significant treasures representing Ngãti Kahungunu, between 70% and 80% of that on display was not actually part of the collection. Migoto notes that the new exhibition will have much more focus on what HBMAG actually holds in the collection. Her major challenge as curator she says, is to bring about a show which combines fresh insight with a truthful connection and understanding of iwi and the wider audience.

Part of that connection will come from using the exhibition of art and artefacts to educate and explain the different value system Mãori use to place importance on their treasures. During our visit, we discussed the abstract nature of differing cultural backgrounds and how they dictate the way we see and value things. Both Desna (from a design point of view) and Migoto see the role of their exhibition as educating about a holistic Mãori approach to presenting and viewing taonga, as well as telling the stories of the objects themselves.

The new taonga Mãori exhibition will be called Ukaipo. The term can have various translations including true home, origin, mother, to breastfeed. In this case it suggests a space where iwi can connect to their place, their past and their Mãori, regional and tribal identities.

The exhibition will run for 12 months before it changes over, and in that time there will be rotations of taonga so that more of the collection can be seen by the public, and the taonga can be cared for in the best way possible. Ukaipo will be one of the most significant opening exhibitions.

I asked Migoto if there were any major ‘stars’ of the new taonga exhibition, and again it raised the notion that the importance of specific items is not drawn from monetary or even aesthetic bases, but from ancestral connections, and iwi provenance. 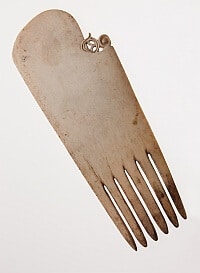 In saying that, there are four familiar and well-loved items we will be seeing again in this exhibition. The four poutokomanawa (ancestor figures which traditionally act as support posts in a wharenui /meeting house) who graced Ngã Tukemata will return in Ukaipo and be part of a show which will include taonga unseen by the public for decades, presented in a way that promises to engage the audience to think about the work in an entirely new way. Sections of the exhibition include a look into the domestic sphere, and into childhood and upbringing along with space that is focused on learning experiences for children and their families. The show will also have a focus on the changing world and the place of Mãori in it.

Of course, as mentioned earlier, a museum is more than a collection of exhibitions; it’s a store and a home for further collection items. It’s also often the best place for historical items to be cared for and protected, as well as researched. The taonga team has been working hard on an access and outreach programme, whereby iwi and the wider community are able to explore and reconnect with taonga not on display. This year taonga have been taken to several marae by staff, who consider relationships between people and taonga to be an essential part of the spiritual care of the collection. The team of Migoto, Desna and Tryphena acts as the access point for the taonga collection, and they’re keen to engage further with interested parties as the weeks roll by towards the reopening.

With all these changes and the new approaches to exhibiting at HBMAG, we can be reassured that we’ll still be able to experience well-known and loved aspects of the predecessor. Sara Browne mentions that yes, there will be an engaging earthquake exhibition, and the museum will still produce the great design-focused exhibitions from the collection that the former museum was celebrated for.

If you’d like to learn more about the HBMAG redevelopment programme, including checking out a timeline and seeing the design plans so you can visualise how much better Marine Parade will soon be looking, visit www.forus.co.nz. Marketing team leader Pam Joyce predicts the new website will be up and running from late March, and at that time, HBMAG will leave its current moniker behind and become known as MTG Hawke’s Bay (the acronym stands for Museum Theatre Gallery). That’s when we’ll all be able to whet our appetites for the new exhibitions by checking out thousands of fascinating collection items online.

In the meantime, if you’re interested in reading about what goes on behind closed doors as the staff work towards September’s big re-opening, take a look at the museum’s blog: www.hbmagblog.wordpress.com

The blog presents some fascinating provenance stories relating to art and objects from right across the vast collection, and great insights into the collection and the upgrade – hopefully enough to keep us all going until September!