The Best Years of Our Lives: Better Be Ready!

Imagine a life crisis. Say, one of your 20-something kids is banged up in a Bangkok jail on suspicion of carrying drugs, or you had a stroke that left you paralysed, and you needed cash urgently. What available cash would you use in such an emergency?

We all hope such life-changing events won’t occur, but for John and Margaret a few years ago, John’s heart condition put them into a financial panic that had them looking bleakly at their lack of liquid assets. He needed heart surgery that was going to cost a mint – how to fund the surgery, which their health insurance policy did not cover? 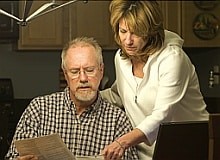 John and Margaret have lived in their house in Havelock North for over 42 years. They are now 67 and 75 respectively. Margaret is a successful practising artist, John makes beautifully finished kitchen boards from recycled native timbers, supplementing the income from National Super. Not being big spenders they have never worried about money, but they eat and live well and are happy as a result. One night, dining out with friends, Marg’s eftpos card was rejected for lack of funds.

It takes a crisis

The combination of this surprising event and the underlying worry of John’s health brought their finances into sharp focus. They knew a conventional loan was not an option as they would be unable to repay a loan, but they had heard about home equity release schemes.

With no idea how they worked, they spoke to Sentinel, the company specialising in reverse mortgage schemes and discovered that their debt-free home would make this an ideal option for them. They discovered they could have immediate access to $100,000. “So,” Marg says, “We thought we’d better take it all out and deposit it safely until it was needed.”

Their accountant and lawyer advised them strongly against it due to the impact of compounding interest over that period. They ignored that advice and went ahead anyway. “What other options were there?” asks Marg, “And the relief from anxiety was just fantastic; we could go ahead immediately with the surgery without fear and no pressure to pay back … Sentinel would get back their investment upon sale of the house or our deaths.”

It all turned out better than they had hoped. John’s surgery did qualify for health insurance after all. He quickly recovered and was able to continue working. In the year that followed, Marg turned 65 and began receiving National Super, so actually, they used far less than they had expected. Nevertheless, the experience cost them $24,000. They have repaid all but $10,000, kept as a buffer against a future emergency.

Marg reflects, “We would recommend that anyone in our situation not panic themselves into taking out large amounts on a home equity release scheme. Borrow small and only as much as required – it is a very expensive option.”

John and Marg’s approach to saving for a rainy day (i.e. not saving) seems typical of many Baby Boomers whose home is their primary asset. With little provision for ‘eventualities’ they are thrown into disarray when the inevitable changes do occur.

Living a life on purpose

However, this is unlikely to occur with my other Boomer couple, Josephine and David, aged 58 and 63. They are younger than John and Marg and they aren’t big spenders either, but they are big savers.

They own a house in town, one in the country and a business property and all are mortgage free. They have investments in a broadly spread financial portfolio and have $100,000 in a term deposit (to cover eventualities).
Josephine: “It’s incredible, we have accumulated money and assets and I don’t quite know how we’ve done it, but we’ve never been big spenders; neither of us are into ‘things’. We have always been able to make do, because if we could not pay cash for something we did without it. It’s not about how much you’ve got, it’s about how you use your money in a way that makes you happy. And we were happy not to owe money.

My work experience allowed me to progress rapidly and with each step I accelerated up the career ladder, earning more money as I went. When my job moved me to Australia, we kept the house in Auckland, which we rented out. When we came back we kept the rental house and bought another house, and so it went on. But we’ve always paid for everything with cash where possible, or if we did borrow money, the priority was always to pay back debt and reduce our exposure.”

Josephine wanted to tell me about a recent meeting conducted by their financial man. She described it as an exercise in communication about their future, between herself and her husband. The financial advisor facilitated the discussion, asking endless ‘what’ and ‘why’ questions. Money was hardly mentioned, but it did reveal to them aspects of themselves and their hopes for the future that they had never fully understood or articulated before.

Josephine again: “The financial roadmap was the template he used and it has got all this stuff about our assets and personal circumstances, but we spent all the time, two hours nearly, on ‘what’s important?’

Dave went through it first – ‘Why did he need money?’ He just needed enough money to enjoy and continue to develop our lifestyle block. ‘Why is that important to you?’ There followed lots of talking about his trees, but in the end it finally transpired that for Dave it was a goal – that he would have achieved something by creating a place the children could return too. A place with roots.

Then it was my turn. It turned out that for me having money was important as a means to an end. I never want to be beholden to anyone.

‘Why is that?’ he asked, and I replied, ‘It’s the way I was brought up, you always pay your way’, values which I picked up from my parents.

I have a huge sense of responsibility for the family because I am the main breadwinner and have been for many years. Then I talked about the children. Having chosen to have them, it was our responsibility, our duty, to be there for them through thick and thin.

Looking forward for me, my problem is what to do with myself when I reach 60. We will have sufficient funds to live on but, as I said at the beginning, it is not about ‘things’ but it is about using my brain. So, there is my new challenge, to find something to do that is using my brain.”

As she says, “If we could not pay cash for something we did without it. It’s not about how much you’ve got, it’s about how you use your money in a way that makes you happy. And we were happy not to owe money.”

The inherited value of ‘paying your way’ out of earnings, not borrowings, and buying property with cash, has resulted in Josephine’s family’s financial security and significant family wealth.

We always knew we should have been saving and not spending. But at least lots of us have a Kiwisaver account now.