Has anyone noticed that in the cacophony of messages assailing us from the media there are two wildly contradictory forces straining to pull us in opposite directions?

On the one hand, there are lead stories about global warming, about how we underestimated it (Lord Stern), about how serious it is getting (melting ice-caps) and about how we are still increasing carbon emissions despite these warnings. On the other hand, articles about the economy bewail ongoing stagnation in many countries, desperately seeking ways to encourage more growth. The crazy thing is that these two messages will be mixed up in the same publication, such as our Listener and even the venerable Guardian. 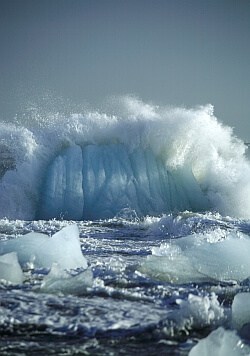 Well hullo! You can’t have it both ways! Surely these publications should decide which side they believe in and stop printing the other?

Economic growth is exponential and totally impossible when based on finite resources (with the exception of the sun’s energy). The reason we have made no headway in reducing carbon emissions is that global economies are still desperately climbing over each other in competition to increase their GDP. John Key complains that to bring farmers into the carbon emissions trading scheme would be to make them “uncompetitive”. In the Listener, Linda Sanders, writing about money, bemoans our failing competitiveness as we drop from the top of the OECD per capita table to 24th, and talks about ways to make NZ rich.

All this talk of growth and competition is so 20th century. We have now seen the limits of our planet, its resources and its ability to absorb our waste. If we continue to compete for those resources the only end in that direction is an overheated planet and serious conflict, already starting, over water and fisheries.

In the 21st century there is a new paradigm, not of economic growth but of balance. We have to find a way to support the global population in a decent lifestyle, indefinitely, and that is not possible through competition any more.

There are two reasons why the current competitive model isn’t working: it causes global warming, showing no signs of its ability to prevent it; and it has failed in its promise of wealth for all.

The neoliberal economic agenda championed by the US (and embraced by our current government) has created uncontrollable multi-national businesses whose power allows them to avoid paying their share of local taxes. The very few at the top have become immeasurably richer even while their tax rates are lowered. Scandalously, they are even allowed to stash trillions of dollars of untaxed incomes in tax havens — enough in fact to solve all the world’s problems. Meanwhile the vast majority has become relatively poorer: an unbelievable 15% of the American population is below the poverty line (20% of those under age18) and these are conservative official estimates – other estimates are higher.

There is no trickle down, only a sucking up. Of course fair distribution was never intended — that was just a con to get enough dupes to vote for the system. Unbelievably they still do! As George Monbiot wrote, “ this is all about power not economics.”

This is the model our government still champions. Well of course they do, because John Key and his mates are in the top 1%.

But I want to look at another way. Before you dismiss me as a rabid socialist I must point out that I too am a capitalist, running my own business and providing a livelihood for 20-30 people here and overseas. Capitalism itself is not the problem; it is today’s rampant, unmitigated version that needs curtailing.

The current system requires us to be competitive so that growth can go on ramping upward. But what if we said no, we have a good lifestyle, this is enough?

Stop listening to leaders who say we are not competitive enough, who go on about our lagging behind Australia. Instead of looking over your shoulder, look around you here: isn’t what we have got pretty good? We have a relatively clean country with abundant food and fresh water, with space for generations of children.

Our leaders tell us that the economy requires us to export more; we must dam our rivers, intensify dairying, frack our fragile land for gas and drill our oceans for oil. This is all to pay our debts and make us rich. But actually it has turned out to be only they who get rich, while we pay the taxes.

And what are those debts for? What are we importing? It would be nice to have a newer car or a bigger TV, but do we really need it and is it worth the price our land has to pay? If we import something, we have to export something. Government and Big Business will do all it can to encourage us to buy because of course they clip the ticket both ways.

I don’t care if we are bottom of the OECD league if we have a happy and healthy lifestyle. Local leaders complain that Hawke’s Bay is one of the lowest achieving provinces, but I would say it is one of the richest in its natural resources and lifestyle.

Join the dots . . . see the consequences. When we were sailing across the Pacific we very rarely saw any shops. When we did I was suddenly reminded of all the consumer goods we were missing. But then I asked myself, do I really want to work a week to have that thing, or would I rather have the time with my children snorkelling over the reefs? I rarely bought anything and we were richer.

Now we have to ask ourselves the same question, and we have to be prepared to accept the consequences of our choice. Are the polluting effects of oil spills, excess dairying and fracking worth paying for more and more ephemeral consumer stuff, which in its own way eventually adds to our pollution in landfills?

I don’t believe in ‘nimbyism’. If I drive a car I have to be prepared to accept the consequences of oil extraction here, not conveniently let it happen unseen as someone else’s problem. Ideally I stop driving altogether, which is not so easy in our society. So we have to accept a certain amount of exploitation of our resources, even as we do all we can to reduce it.

But I do not accept exploitation happening purely to offset our debts, especially when it has the additional effect of increasing global warming. Is it really all right to sell others more carbon to pump into the atmosphere, just to make us richer? No, instead it is our responsibility to reduce those debts.

My model for Hawke’s Bay

The biggest import into Napier port is fertiliser. Balanced organic farming needs much less fertiliser, using instead locally made compost. If we cut that import bill we don’t have to sell so much. When we do have to export, let’s look at how we can do this without damaging our environment. For instance, the fastest increasing local export item is corn from the Gisborne area — why? Because it is a rare enclave where the corn is unpolluted by GM modified varieties – globally people don’t want GM food. Organically grown, non-GM corn would be even better and fetch higher prices, without the need to import the fertiliser.

Instead of the discredited and disastrous economic model of globalisation, let’s look at localisation; and at collaboration instead of competition.

Here’s my model for Hawke’s Bay: we do what profits us not them.

With every dollar you spend think hard about who profits most from it. You can either buy bad food that makes you unhealthy from an American franchise and unsustainable factory farming, and see the profits go off shore and our roads full of trucks pumping carbon. Or you can buy good, sustainable organic local food that keeps your money circulating here, our land clean, and our hospital costs down.

You can either buy the latest and biggest new car every few years, contribute more to global warming and leave your kids at home while you work like crazy to pay it off. Or you can keep a local mechanic going fixing up the old smaller one for a few more years. In many little ways like these you give jobs to locals, reduce your pollution, keep our overseas debt down, and keep the profits here to support our community and have a better lifestyle, all without being so competitive.

And when a leader starts talking about competition or growth, quietly turn your back.