The Best Years of Our Lives: Midlife Career Change

When Charlie Bazzard (solicitor) was 43, he was informed by his employer they were going to close down the law practice in England where he worked. It triggered something of a midlife crisis for us, and as a family with three children we felt like rabbits in the headlights, stunned and indecisive as to what to do next.

A year later, we returned to New Zealand to make a new life. We bought a vineyard and followed this solicitor’s dream of making wine. We found it hard work and we were constantly short on cashflow, but it transformed our lives and we loved it. We stuck it out for 20 years and never regretted a moment.

The decision to change career can be sudden or may be brooded over for years. It’s major in the scale of life events. Research suggests that many dream, but it takes huge optimism and courage to act on it, and the decision to do so will frequently depend on financial backup and spousal support.

On her website, specialist career and work psychologist Dr Ellen Ostrow observes, “Career transitions at midlife are very different from those taken in our twenties and thirties. The importance of status, success, money and meeting the expectations of others is diminished by the recognition of one’s mortality.”

“At midlife,” she says, “we tend to reflect on the gap between the reality of our lives and the dreams we once had. We want the second half of our lives to be meaningful because we won’t get another chance.”

Two of my friends have described their reasons and experiences of career change in midlife.

Susie is now 59 years old and working as a registered nurse at the Hawke’s Bay Hospital.

She works seven days in a fortnight doing whatever shifts she is rostered for, meaning nights are quite common. She gets very tired and she understandably treasures her days off.

Susie had spent 27 years working as a school dental nurse, finally resigning at the age of 46 in 2001. For ten years she had wanted out, feeling isolated and unhappy. After a year of travel she began a nursing degree at Eastern Institute of Technology.

“Looking back, I realise that it took courage to leave, more than starting the nursing degree, because I’d been so comfortably locked into that life. But once it was done I never regretted it. I guess I was frightened of the unknown.”

In contrast to Susie, Lynda’s decision to change direction was made suddenly. She describes waking up one morning with a vision of herself as a student studying art. Four weeks later she had resigned her job, packed up her life in Auckland, having rented out her house, and was settling in as a mature student in Dunedin. She was following a dream of exploring her artistic talents. “It was such a buzz,” she says. 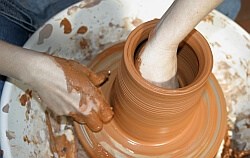 Lynda’s career was in orthotics and prosthetics at the Artificial Limb Centre in Auckland, working as a technician making and fitting limbs. She had always loved making art and especially working in ceramics. One year before making her change of career, her life was altered thanks to high-tech hearing aids. “I had been hearing deficient all my life; this has given me the confidence to ask questions, to be more interactive, I felt a totally different person.”

“I started off being a bit cautious with the Diploma in Visual Art which was only two years. I wanted to do ceramics, but within a couple of weeks of getting there I hurt my back quite badly and realised I had to do something more physically sustainable. I chose the Diploma in Printmaking and then, at the end of the two years, I was hungry for more information. My back had recovered well, so I jumped over to ceramics for the third year to complete my degree.”

Susie also chose to ease herself into study by taking the foundation course in nursing, starting in July 2001. Importantly for her confidence, she passed everything including two of the first year nursing papers in that semester. “But even then I wasn’t 100% sure that I was on the right track. But … where else could I go? So I went ahead.” Sue admits that she needed time to find her new pathway.

Lynda found the cold of the Dunedin climate and living in a 100-year-old un-insulated house the hardest thing about her life as a student. “You lit the fire and almost had to sit on it to feel the heat which went straight up the chimney.” She laughs as she recalls this, but says she suffered from health problems as a result.

Art degrees don’t have major end-of-year exams and are assessed on frequent assignments, but it was the methodologies of coming up with the work that were quite tricky. Lynda expected to be one of the older students but what she found was a mix of ages from 17 year olds to 72. She says “You’re never too old to benefit from study”.

Susie was fortunate in finding a nursing job at the Hawke’s Bay DHB; many of her student cohort struggled to find work and left for Australia. However, the realities of nursing were that it was both physically and mentally hard. “Even though I’d completed my degree, I didn’t feel prepared for what I had to do. I don’t bring my work home with me, but being older I don’t have youth and energy on my side. If something untoward happens I can get quite rattled by it, but fortunately, with other nurses on the ward, you have other people to draw on.

“I love the camaraderie and working in a team with the physios, occupational therapists and doctors. I especially love seeing someone with, say, a severe stroke – they can’t talk or feed themselves –and then after six months, to see them walk out, that is a wonderful thing.”

As mature students the challenges for both of them were significant, but they were met and overcome. Lynda knows she is unlikely to make a good living solely from her art, but is encouraged by being selected into the 2012 Wallace Awards and into the travelling show, which is the highest category. She also got three pieces into the 2012 Portage Ceramic Awards held at the Cloud at Queen’s Wharf. Lynda has a four-day-per-week job which allows time to continue making her ceramic and print pieces, so with the awards and two galleries selling her work she feels very optimistic about her future.

Lynda and Susie are women with no family commitments and owned their own homes when they became students. They survived on mature student allowances, student loans and a little of their own capital, and are deeply appreciative of the encouragement and support from close friends and family.

Both are proud of their achievements and feel the experiences involved in establishing their new careers widened their horizons, brought confidence and self respect, and have been incredibly fulfilling.