Ko au te awa, ko te awa ko au I am the river and the river is me

Water is an integral, defining part of Mãori self-identity. And here in Hawke’s Bay, Ngãti Kahungunu, the country’s third-largest iwi, has begun to flex its muscles as a more active voice in water issues. 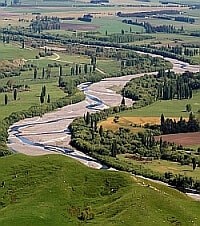 In particular, the proposed Ruataniwha dam has drawn the attention of NKII, the organization responsible for the iwi’s development. As reported in the DomPost (24 Apr 2013), NKII chairman, Ngahiwi Tomoana has complained that the iwi has not been properly consulted on the dam.

Consequently, Mr Tomoana has asked the HB Regional Council for a six-month delay in further processing of the dam proposal.

He has written in Hawke’s Bay Today (6 Feb 2013): “…this iwi has alternative suggestions to water storage and economic development that need further examination and conversations rather than us all being chained to such an expensive idea of a super dam.”

And contrary to impressions promoted by HBRC that Mãori are presumptive investors in the scheme, Mr Tomoana says in the DomPost: “They [council] seem to have just assumed we will invest … Those other iwi have come to us to ask for our position. We’ve said we are not investing and explained why and they’ve said they won’t invest unless Ngãti Kahungunu takes the lead.”

The values and worldview underpinning of the iwi’s position on this and other water issues is well-presented in the following article prepared by Ngãti Kahungunu:

Our marae were always situated strategically near waterways which provided mahinga kai (e.g. tuna/eels, pãtiki/flounder, mullet, kakahi/mussels, watercress) and were also the ‘highways’ of the past, linking distant settlements together.

When introducing ourselves to others, our awa (river) or wai (lake) is an important part of our mihi (greeting) alongside our maunga (mountain) and Tipuna (ancestors). Thus, in this way, waterways are intrinsically linked to our whakapapa (geneology), giving rise to the Mãori whakatauki (proverb):

With the natural environment being vital to human survival, we are all charged to preserve and protect our air, water and lands and the resources within for the benefit and survival of ourselves and our mokopuna (grandchildren).

Mãori have always considered that the waterways in our rohe (region) are ‘ours’ in a collective sense, so it should’ve come as no surprise that when the National Government announced what amounts to the privatisation of our water, that Mãori would want some definitions around “Mãori rights in interests to water”.

In Ngãti Kahungunu the iwi has been very active in this space, holding numerous wãnanga (learning workshops) and hui (meetings) with our whãnau and hapü (groupings of whãnau) over the past four years to develop an iwi-wide view on water.

More recently hui have also been held with key stakeholders in the community (from Wairoa to Wairarapa – the Ngãti Kahungunu rohe/region), including mayors and high-volume water users. The purpose of these hui is to determine a regionally appropriate solution to the complexity of water management (win-win scenarios).

The claim is to protect the interests of Ngãti Kahungunu whãnau and hapü to their lakes, swamps, aquifers, springs, rivers and other waterways.

Ngãti Kahungunu has commissioned a range of research to strengthen and support our claim:

Ngãti Kahungunu have proposed a range of remedies. These include: establishing a Kahungunu Iwi Water Authority (KIWA), water royalties, and commercial use water levies.