The Best Years of Our Lives: Volunteering for Cranford Hospice

What would New Zealand do without its willing volunteers? A two-yearly study by Statistics New Zealand shows that a million adult New Zealanders are actively involved as volunteers in the community, that is one third of the population across the 35-74 year age group. It is a proud record.

The volunteer involvement is very wide in range: in sport, education, arts, health and community work, with men and women volunteering equally (33%), with a similar ratio being employed and doing voluntary work (33%). The study also shows the better educated you are, the more likely you are to be doing voluntary work.

It is a huge subject involving many people, organisations and differing demographics; but for this column, I have focused on the volunteer contribution to Cranford Hospice in Hawke’s Bay.

Cranford relies heavily on its volunteer workforce. Funded only partially by the Hawke’s Bay District Health Board, Cranford Hospice not only requires volunteer workers’ time and motivation, it relies on public goodwill and generosity to make up the funding shortfall. 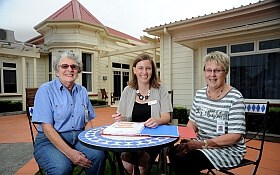 In total, the number of volunteers involved with Cranford Hospice is 400; 250 in the four Cranford shops and an additional 150 performing hospice-related tasks including kitchen, laundry, patient and family support, day hospice, life review, administration, flowers, gardening and driving. They are as essential to the successful running of the hospice as the clinical staff.

Two years ago Karyn Teddy was employed to manage the volunteer component of the Cranford workforce. “Cranford is fortunate compared with many other organisations that rely on volunteers,” she says. “Because Hospice is so well known, we find people usually come to us enquiring how they can help – most of them having had a family member who has been a patient with hospice at some stage.

“While Cranford volunteers are predominantly women over the age of 55, there is an increasing pool of people who are studying or working, or younger mums who can fit in a few hours here and there. Other groups volunteering include young people doing the social responsibility component of the Duke of Edinburgh Awards; students, including student nurses from EIT; and groups from local businesses doing corporate volunteering.” Of the 400 regular volunteers, only approximately 10% are male.

Helen Blaxland, general manager of Cranford adds: “Hospices throughout the world have been founded on volunteerism and this is pivotal to our ongoing sustainability. Each year volunteers give around 45,000 hours of service to Cranford – a financial contribution, if based at $15 per hour, of $675,000. I reminded our DHB of that recently during our contract negotiations! Caring for our dying is a community responsibility and I am so grateful for those 400 volunteers who assist us in this work.”

The recruitment process is very similar to that for Cranford nursing staff – an interview, a referee check, police check, and training. The initial volunteer training and buddy period is an essential process for finding a fit between the volunteer and the organisation. “After all,” says Karyn, “the volunteers in Cranford are working with members of our community at a very vulnerable time in their lives, the fit has to be appropriate and the volunteer has to be happy with the work. At this stage, some people choose to pursue other volunteering opportunities.”

“Some applicants initially have misconceptions about the services hospice provides. Typically, ‘Once you come in here you die’. But that is not the case as three-fourths of patients leave here better than they were when they came in. So the interview process is also a tool for education and the prospective volunteer gains a better understanding of the key purposes of Cranford.”

Karyn explains that in her role as manager of volunteer services, it takes time to better understand what people want from their involvement and also their motivations for volunteering. “When I started, there were three or four key areas volunteers could fit into, but now I structure my interview to draw out how someone wants to fit in and it is very few and far between that it hasn’t worked out. I think people who volunteer have a certain expectation of what they are getting involved with, so people self select.”

When potential volunteers are asked why they want to get involved, most will say they have had a family member who has been a patient with hospice and they want to give something back. For a few, it is also about working through their own grief. But for many applicants it is about getting involved and keeping busy and useful, a way of feeling one is still in the mainstream and able to use their skills.

Karyn: “I’ve had younger parents wanting to give an example to their children, to be seen to be giving something back. Almost without exception, the youth who choose to volunteer have had a parent who has volunteered at some stage of their life. I’ve had volunteers who have recently moved into the district and want to meet people, to meet a social need. Some make it clear they want to include volunteering on their CV, such as student nurses from EIT who will shortly be out job-seeking. This can be a win-win situation for both the volunteer and Cranford.”

The Cranford laundry is done on site and is largely managed by volunteers.

The four Cranford shops contribute a huge amount of funding with each having a part-time manager and assistant manager, but all other personnel are volunteers working rosters, sorting, pricing, driving, collecting and moving furniture and dealing with customers.

Other forms of volunteering are enhancements beyond the professional work done by clinical staff. For example, they sit (or walk) and talk with patients and their families, assist staff with the running of the day hospice or meal preparation, arrange flowers, or work in the gardens – the things that make Cranford a peaceful and beautiful place to be.

The volunteers of the Life Review service working out of Cranford Hospice are recording the life stories of Cranford patients who wish to leave a memoir. Over a period of several weeks the Life Review volunteer sits with the hospice patient as they reflect on their life, telling their story in their own words. The service began late in 2012 and so far three patients have had their memoir produced into a very personalised and beautiful book.

As every organisation utilising volunteers knows, it’s a two-way street. The volunteer has needs that must be met or the volunteer can just walk away. They have to be the right fit for the task and understand how to make their contribution. Like employed workers, volunteers need to be properly trained and integrated into the organisation with a clear role, they need to feel appreciated by the organisation and the people they help.

As a Cranford volunteer I can vouch for the sense of ‘giving something back’, but I am also doing this for myself. It’s motivating … I enjoy the involvement … I have a network … I meet inter-esting people and hear their stories … they appreciate what I am doing for them … and it’s meaningful.
– Kay Bazzard