Gay Marriage Coming to the Bay

“All the world is queer save thee and me, and even thou art a little queer.”
Robert Owen

“Christians are going to take control of this country,” declared Hastings-born Sir Keith Hay in 1985.

He, and former Napier mayor Sir Peter Tait, were leaders of the Coalition of Concerned Citizens, who amassed 800,000 signatures on a petition opposing decriminalisation of sex between men. 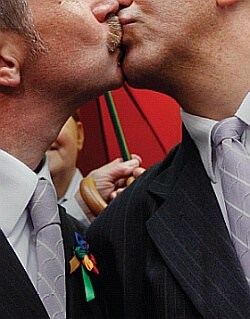 MP Fran Wilde had a bill before Parliament.

Hay and Tait were Baptists, proudly calling themselves, ‘bible bashers,’ and they followed the lead of Pastor Lloyd Rankin whose objection to law change was: “… it would lead to homosexuality being actively promoted as an acceptable, normal or alternative lifestyle. It would undoubtedly lead in time to the recognition of homosexual ‘marriages,’ allowing innocent children to be adopted by such couples.”

Over coffee I talk with Paul Davison, minister at the Hastings Baptist Church, to find out if things have changed in nearly three decades.

He says, “It’s the same issue over the past 30 years in terms of moving from prohibition, to permission, to promotion of homosexuality. But our thinking has become clearer in the last 20/30 years. We see people having homosexual tendencies, or desires, in the same way that I might have adulterous desires, or I might want to pinch things, but I must conform my life so I’m not a thief, I’m not an adulterer, and I’m not a homosexual.”

So the progress made by the Baptist Church?

“In the past I don’t think there’s been a distinction between those two states.”

“There are all sorts of people who will struggle through life with what I call disabilities: faults, sin, desires. So there’s a difference between a practising homosexual, and someone who self-identifies with that as their orientation, but doesn’t (practise it).”

I’d like to say, “But Paul, practice makes perfect.” Instead I ask, “So, can a homosexual be part of your congregation.”

Paul replies, “The Christian view is, ‘Yes, that might be my orientation in life, but I will live within the restraints of sexual fidelity’, and so that excludes homosexual behaviour. I’m not saying you have to be reprogrammed, or something, but you have to work through the difficulties of life, and other people have other difficulties … no better or worse.”

And the ‘slippery slope’ fear seems as potent today as it was before, when Paul says, “There will come a time when the Human Rights thing will say, ‘You’re discriminating against homosexuality.’ It won’t be about respecting the last bastion holding out for Christianity.” 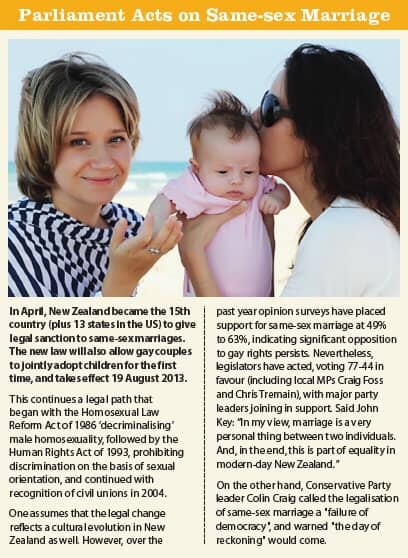 As we part, and I watch Paul walking back to his church, I can’t help thinking of John, the first Baptist, who ended his life with his head served up on a plate.

Father Peter Head, based at St Patrick’s Catholic Church in Napier, is reluctant to use the word sin. He prefers failure.

That’s because, “The Church has always taught that the sexual (genital) expression of love is found, according to God’s plan of creation, uniquely in marriage, that is, in the permanent union between a man and a woman. Consequently, the church does not put a homosexual partnership on the same footing as a heterosexual marriage.”

But Father Peter is at pains to point out that, “When faced with failures, the church exercises its pastoral sense: it does not in any way reject those who are confronted with failures regardless of who the person is, whether heterosexual or homosexual.”

And although excluded from marriage in the Catholic Church, Father Peter says, “Catholicism teaches that homosexual people must be treated with respect, compassion, and sensitivity.”

In their submission, the Presbyterian Church opposed the Marriage Amendment Act on the grounds they uphold “the traditional Christian understanding of marriage as the loving, faithful union of a man and a woman, grounded in Scripture.”

However, unlike the Baptists and Catholics, they gave qualified support to decrimalisation in 1985, but still they affirmed that “homosexual acts are sinful.”

Sally Carter, Minister at St Paul’s in Napier, will not be drawn into a discussion on Scripture, because she says, “I serve a congregation which holds a hugely wide range of views, and my job is to be the minister to my congregation, and at the moment that involves me not speaking publicly, personally, about the doctrinal issues.”

Talking with Sally I realise she is deeply committed to the process of working through the issue with her congregation and the wider church. 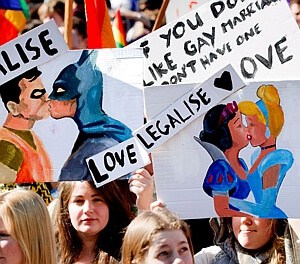 “The way we work is that the democracy extends right into the parish. We’re governed by a body of Elders, of which I am one, among equals. In our last meeting of Elders we didn’t meet to make a decision. We were there to gain an understanding of one another’s points of view, and to decide how we would approach the conversation with the congregation as a whole, and then see where that led us in discerning how we move forward.”

I sense a degree of frustration from Sally that she can’t express her own point of view at this stage in the process, but she does say, “Our real challenge is how to relate to postmodernity, because modernity has given us a heritage of expecting Scripture to provide clear answers, but postmodernity, which we’re encountering with the next generation, is perhaps not expecting to treat Scripture in quite the same way.”

Sally’s talking about historical context in biblical interpretation, and admits, “The mind of the church moves slowly.”

Jenny Dawson, Bishop’s chaplain in the Anglican Diocese of Waiapu, has no reservations in expressing her opinion.
“I started the millennium by blessing a couple of young lesbians on the beach at Camp Bay near Christchurch,
because that’s how I wanted to start the millennium.”

For Jenny, the turning point came during the Law Reform debate in 1985. She was attending a forum about being Christian and gay.

“Someone asked this gay man, who’d been with his partner for 26 years, ‘Aren’t gay people more promiscuous?’” He carefully replied, “If your relationship wasn’t recognised by your community would it encourage you to faithfulness?”

Jenny says, “I knew then this is what I had to support.”

And now she is sympathetic with fellow Anglican priests who have said they won’t do any weddings until they can marry anyone who asks.

“Actually, I don’t get asked to do a lot of weddings,” says Jenny. “But if I was vicar in a parish with a pretty church, like St Luke’s in Havelock North, it would be a real issue. And I would be saying to heterosexual couples, ‘I’m sorry but I can’t officiate your wedding until May next year when the church okays we can marry anybody’.”

May 2014 is when the General Synod next meets, and the expectation is an endorsement of same-sex marriage equality.
In the meantime, Jenny says, “It’s important to Bishop David (Rice) and many of the leadership that we don’t jump ahead of the process and that we allow the church to do its work.”

And what is that process?

“We’ve asked the church to provide a service, a liturgy, for the blessing of same-sex relationships. And as soon as they do, we know they’ve okayed it. Let it sit on the table until General Synod next year. That’s our process, and the whole church is staying together on that.”

When the Marriage Amendment Act comes into law on 19 August, Trinity Methodist Church in Napier, and its minister, Tony Franklin-Ross, “Are happy to perform marriages between same-sex couples on site.”

And what process has led to this decision?

“In Methodism we had a split in the ’90s when the question of gay or lesbian ordained ministers arose, and in the end, after a very fractious and painful period of debate, the church finally decided it would allow gay and lesbian people into ordained ministry. And there was a division, and the Wesleyan Methodist Church arose.”

The Wesleyan website say they formed in 1997, “to coordinate the work of evangelicals who could not live with the increasingly radical liberal theology of … acceptance of ministers living in sexual sin”.

Tony Franklin-Ross doesn’t seem perturbed about the split. “That sliced and diced things, and those who couldn’t live with it, walked. Some parishioners still struggle, but as a whole the Methodist Church has maintained its more liberal perspective.”

I’m interested to know how the Methodist Church made its decision to support same-sex marriage.

“The National Methodist Church issued a pastoral letter taking the same policy it did over civil unions. That is, allowing parishes to make up their own mind as to whether they will have same-sex marriages permitted in their church buildings. It’s a parish-by-parish decision.”

Consultation with the congregation of Trinity has taken place. As Tony explains, “The pastoral letter was announced and the contents explained. We sought feedback, and the Parish Council last night confirmed the same attitude to same-sex marriage as civil unions.”

However, a further step has been taken in Methodist democracy, because now, “If a parish is willing to have same-sex marriages happen in its church, but the incumbent minister is not comfortable, then it can invite a minister from another parish who is happy to perform the ceremony, and visa versa. If a minister is happy to perform and the parish is not, then the minister may seek to use another Methodist church that is accepting.”

I’m not surprised to learn that the liberal attitude of Methodists is deeply rooted in the congregation.

Part of Trinity’s mission statement, written over ten years ago, is “being a welcoming vhurch family for all people, irrespective of age, gender, sexual orientation or culture”.

“That might have been easier to write at the time without knowing they’d have to stand up for it so quickly,” says Tony. “Now, I think it’s become part of the ethos, and sits there, undergirding the parish.”

The churches are responding in their different ways to the Marriage Amendment Act.

At one end of the spectrum the Baptist Church is defensive. “The church gets hammered, ‘you’re always anti-gay’,” says Minister Paul Davison. “But in fact it’s society’s agenda. A hundred years ago churches weren’t talking about homosexuality, culture wasn’t talking about it. It had no place, so it wasn’t top of the conversation. It’s a cultural agenda and the churches are responding to it.”

In its submission on the Act, the New Zealand Bishops Conference defined marriage as, “that of a public, committed, permanent and loving relationship between one man and one woman”. Father Peter Head says, “Due to what the definition of a marriage is according to the church, I do not think there would be a time for same-sex couples to marry with the blessing of the church.”

At the other end of the discussion the Methodist Church is facilitating adaption to cultural change. “If a couple choose a minister to perform their civil union or marriage they are taking a faith-based decision. The purpose of asking for church involvement is faith statement, and the legal aspect is way down in the minds of those asking. It’s a celebration and affirmation of their relationship.”

In between, the Presbyterian Church is struggling with the issue, and unlikely to endorse same-sex marriage anytime soon.

But for many Anglicans the time can’t come soon enough.

As Jenny Dawson says, “The process around the Act is that it’s all moved slightly quicker than the church, which is a shame, because it would have been fabulous to see the church being prophetic on this issue. When I say it would be good to be prophetic, I know our bishop, David Rice agrees. He’s taken a position where he wants to see Waiapu being very open, very welcoming, and for heaven’s sake, if we can bless battleships and tractors, we can bless people.” 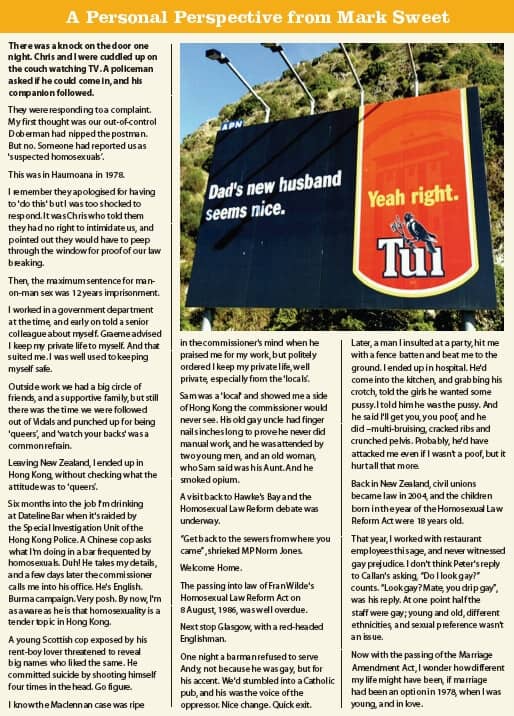