The Best Years of Our Lives: Personal Activism and Positive Ageing

Standing up and being counted takes courage and a strong belief in the justice of your cause. Marie Dunningham, Isabel Morgan and June Graham have been doing this for much of their lives – and still are.

Over the decades, they have challenged the status quo and voter complacency by raising awareness of social injustices and environmental exploitation. They have questioned vested government and business interests; they are articulate, hard working and persistent; they network, read the research and sometimes do the jobs no one else wants to do.

It appears that for them age is irrelevant. They travel to conferences, attend meetings and stand up in council chambers or parliamentary sub-committees to express their concerns and ideas.

Isabel Morgan recounts how in the 1970s there were threats to the Ahuriri estuary from those intent on reclamation, dredging, marina proposals and motorway developments. “The threats and the need for resistance were unrelenting,” says Isabel. In 1981 she, with Forest & Bird Hawke’s Bay, established the Ahuriri Estuary Protection Society as an independent voice in the fight to save the estuary. 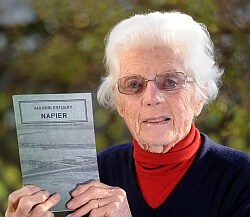 The momentum increased when a 1979 environmental study prepared for the city council by the estuarine research unit of the Zoology Department of the University of Canterbury was presented. The report described the estuary as “a unique wildlife area with one of the greatest concentrations of water birds to be found anywhere in New Zealand in relation to its size”.

At that time there was limited understanding or appreciation of the environment and the negative effects of development upon the delicate ecological structures of water, land and sea. The society wanted to keep the estuary unspoiled and unchanged. By raising awareness it gained the support of local people and people around the country and was influential in having the estuary developments stopped or reconsidered.

Isabel is active in the society working on city council reserve plantings, and school projects such as Enviroschool at Napier Intermediate.

She has been involved with Forest & Bird for many years and participated with the reintroduction of kokako and kiwi into the Boundary Stream conservation project and was recognised in 2007 with the NZ Order of Merit for conservation.

Am I an activist?

June Graham returned to Hawke’s Bay in 2004, having lived in Tasmania and other parts of Australia for over 20 years. She felt disconnected and out of touch with her home town and began attending public meetings in order to understand how it all ‘worked’ and to find out what people were interested in. “I’m not naturally a political person but whilst I was living in Tasmania threats of coastal development had troubled me,” and she had found herself involved. 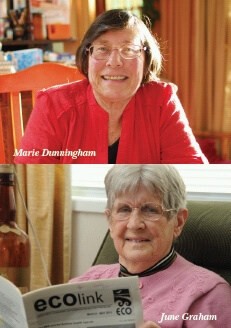 June sees herself as an ‘interested person’ rather than an activist, but says, “I suppose what I do could be construed in that way. When I attend political or public meetings, something may strike me as interesting or a bit odd, so I ask a question, I just want to know. The politicians often make obscure answers to avoid answering the question or use jargon, so I say, ‘I’m sorry but I don’t understand what that means.’ I don’t care if it makes me look stupid, at my age that doesn’t worry me.”

A drive to Wellington to make a presentation to a Parliamentary committee doesn’t faze June either; and she has served as a ministerial appointee on the East Coast Hawke’s Bay Conservation Board.

But, she says, it is a struggle not to become cynical. She acknowledges that for her, getting older means she has less time left to question those in power, so she feels compelled to continue and she has become “quite outspoken”. It saddens her that so many people don’t read the local newspapers to keep abreast of developments – a healthy democracy needs informed and involved citizens.

She suspects that her friends think she is a bit weird to be bothering with politics. “Older people seem to quietly withdraw, but perhaps that is because of health or social reasons,” but she has noticed that the more old people there are living together in a ‘retirement community’ the more insular they become.

I am a socialist

Marie Dunningham was recently elected the new president of Grey Power Hawke’s Bay, having been its secretary for ten years. She is a frequent presenter at council and district health board meetings. She is articulate with a sharp, hilarious wit and is a great believer in using humour to disarm and get her message across.

“Grey Power engages me intellectually as well as emotionally,” she says. “I take a very broad view … I think we [Grey Power] have a finger in every pie: town planning, the environment, retirement living, house design, transport planning, pensions, health, education, being out in the community, being needed and wanted. I think Grey Power should be represented on health boards and councils, we should go to environmental meetings and wave flags in the street.” She adds with a laugh, “Mind you, not all the committee agree with me.”

Her involvement with Grey Power requires keeping up to speed with anything which relates back to her constituency; the population of over-50s. She finds herself trying to sort out people’s problems. Sitting on the table beside us as we talk is a book on tenancy law. “I have stuff lying about that must be read and it collects up into piles all over the place.” She is incredibly busy, seemingly relishing the excitement and challenges she is presented with, even though she frequently finds herself at odds with all kinds of people. This does not faze her.

Dunningham has been socially aware and active all her life. She recognises that she was serious right from the start, reading from an early age and discovering a book by Karl Marx when she was 14. She and her brother found a book titled The Ragged Trousered Philanthropist in the school library, with a strong socialist theme on the lives of working class miners, how they were always at the bottom of the heap in a poverty trap. “I’ve never forgotten that book,” she declares, “I am a socialist and have been all my life. I was raised with a respect for the rights of the individual.”

As a young mother with four children she became very involved with the playcentre movement and later began nursing training at the age of 38, which broadened her interest to a wider age group and into other sociological problems.

“I rose to the top of a number of voluntary organisations because I was interested and I wanted them to work. All the groups I have belonged to are groups that are willing to rock the boat – that was the attraction for me.”

These women set a shining example to the complacent amongst us. They sparkle with vitality, good health, and self confidence. Is their passion and commitment the answer to old age … some kind of elixir of life?