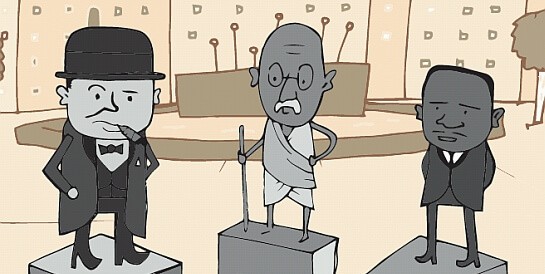 All over Hawke’s Bay, wherever we drive, hoardings of candidates in the local body elections pepper the roadsides. Some names and faces we know, others are new, and most have a byline.

‘Proven’, says a mayor standing for his fifth term. ‘Your choice for change’ announces a challenger. A Council hopeful says he’s ‘Speaking up for you’, and ‘Making things happen’ claims a sitting member of fifteen years, and others offer positive change, experience, and trust.

Their slogans and claims may differ, but what the candidates have in common is a belief in themselves that they can be leaders of their community in local government. 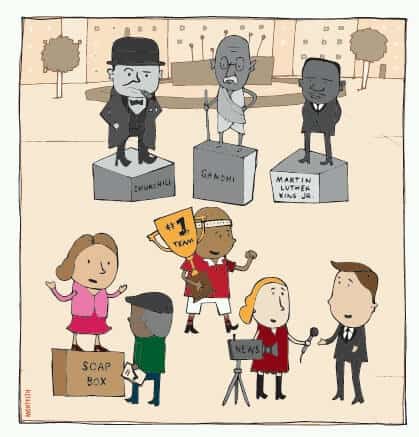 But what does it take to be an effective leader?

Neil Taylor, retiring CEO of Napier City Council has seen three mayors and scores of councillors come, and go, and the first thing he says is, “What makes a good leader is the fact that some other people follow them.”

And he steers the discussion toward historical context. “Definitely in my grandparents’ time, and even in my parents’ time, they lived happily being told what to do. They were very constrained by their leaders telling them how to live their lives. It’s not the same today.”

He’s right. Even 50 years ago, Church and State ruled with a heavy hand, unthinkable today. Pubs closed at six o’clock; divorce was frowned upon and had to be publicly notified; unmarried mothers were stigmatized; and prejudice against women, Mäori, and homosexuals was institutionalised.

Reaching back further in history, Taylor asks, “Was Genghis Khan an effective leader?”

For sure, he used guerilla warfare with mounted soldiers to successfully conquer his enemies.

“And Alexander the Great?”

Well, he invaded Persia, and his army reached as far as India.

“But they wouldn’t be considered effective leaders today, would they?”

“What about Adolf Hitler?”

We agree Hitler was an effective leader, but he was also a murdering psychopath.

“And Winston Churchill. Was he an effective leader?” Neil asks.

Churchill was a great war-time leader. “But not in peace-time,” says Neil, “Churchill wasn’t a collaborative man. The war was over and people wanted to have a say.”

The point he’s making is that, “You have to put leadership into historical context. Leadership changes and what makes a good leader changes. It depends on the slice of history.” And, says Neil Taylor, “In today’s slice of history, collaboration has become critical.”

Collaboration is derived from the Latin, Collaborare, meaning ‘to work together.’

For Nicola Ngarewa, Principal of Tamatea High School, working together has been a key to her success. “Part of our belief is around it takes a whole village to grow a child,” she says. “I rarely call us a school because we’re a learning community – the kids, the whänau, the school, and the wider community – all working together to influence positive change.”

Nicola’s leadership skills in education were recognised by the Sir Peter Blake Trust when she was one of six recipients in this year’s Leadership Awards. 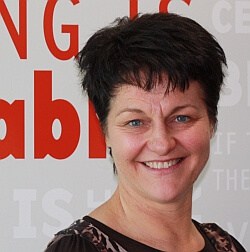 As with many outstanding leaders Nicola Ngarewa is a visionary. “Imagine,” she says, “if everywhere, our learning communities weren’t just working together, but were producing students who excelled at whatever their endeavour, and they were all good people connected to their society. Imagine the change that would be. I know it’s idealistic, but that’s what drives me.”

Jenny Yule is one of Hawke’s Bay’s most successful entrepreneurs, and she too is driven by an ideal.

“We are not individuals in this life,” she says, “We’re inter-connected, and it is through our relationships we forge our understanding of life.”

Relationship is at the core of Porse. The business is founded on providing in-home care for children in their most formative years. “The business aspect grew from recognising the need to grow our babies in natural environments, and in a very loving and held relationship, during the early brain development period.” And, says Jenny Yule, “The vision for Porse was to empower people to establish that high trust environment (needed to care for babies).” 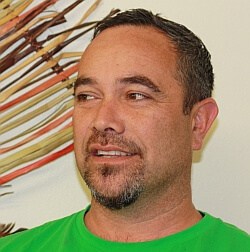 “No system can oversee or manage that many people, so we encourage people to be self-inspiring, and self-regulating.”
But how is that implemented?

“We call ourselves a living-learning organisation, and there’s not a hierarchical approach. We’ve flattened the power base so there’s no such thing as control; there’s clarity of purpose, and clarity of responsibility. In Porse everyone has a leadership role, and the support we offer is a coaching style to management.”

Coaching isn’t a style for Craig Philpott. It’s his title. He’s coach of the Magpies, but his point of view echoes Jenny Yule.
“All the guys on the field have some degree of leadership. All the players have responsibilities individually, as well as for the team. So they have to lead themselves first and foremost in making the right decisions.”

But what about great rugby leaders? Like Richie McCaw.

“He’s pretty unique,” says Craig, “People like him don’t come along often. On the field he’s tough and fearless, and he’s prepared to put his body in places where other players wouldn’t, and he’s prepared to play through a pain barrier. He played the World Cup final with a broken foot. Most people wouldn’t even get out of bed.

But Richie’s what I call a servant leader. Everything he does around his leadership is for the good of something bigger, whether it’s the team, or the organisation he’s associated with.”

Developing a culture of team before self is a hallmark of Craig Philpott’s coaching style. Carved on a stone in the gym at McLean Park are the team values – family, sacrifice, passion, enjoyment, attitude and responsibility. And after last year’s shaky start, Craig has introduced three principles to guide the team – no egos, team before self, and hand up, not out.

“They’re the values of servant leadership we want the team to have. If it’s about individuals there are a lot of motivators. If it’s about the team there’s a single motivator, and wherever you go, you’re heading in the same direction.” 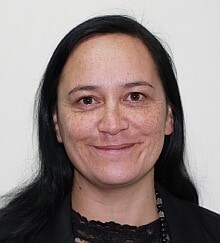 But, as Daniel points out, leadership comes in different forms, and to be most effective requires a blend of what he calls transactional, transformational, and transformative leadership.

“You have to be transactional in managing the day-to-day business, and you have to be transformational in implementing changes, which in education are mostly external – qualification changes, structural changes, financial changes, curriculum changes. Then I think it’s important to be able to shift into transformative leadership which is about seeing a big picture around societal change.”

A big picture for Daniel Murfitt is fostering appreciation of cultural richness and diversity, and part of the process is recognition that many of us, including some teachers, have entrenched deficit thinking toward racial minorities, which inhibit the development of some students. “Many New Zealanders don’t see the cultural wealth sitting right in our community that the rest of the world embraces.”

Colenso College has seen a significant shift in raising Mäori achievement, but as Daniel points out, “For us to get true and sustainable gains for Mäori outcomes we have to be influencing what’s happening in society.”

Daniel Murfitt’s style of leadership has social justice at its core, and his initiatives for enriching the learning experience has encouraging results for all Colenso students, but especially for Mäori.

Ngäti Kahungunu Inc is the prime leader of Mäori aspirations in Hawke’s Bay, and Dr James Graham sees exciting times ahead where: “Different challenges have to be woven into the whole process of education, and nurturing leaders.”

The remaining Treaty of Waitangi claims are being negotiated and with the settlements come more opportunities. “It makes sense in planning for the future to produce our own scientists to deal with marine ecology, water ways, and agri-businesses, and Mäori need to become the owners, and the CEOs, and the accountants and lawyers.”

At Tamatea High School, Nicola Ngarewa is priming her students to fill those roles, and more, and she tells them, “You’re raised in a country where there are no socio-economic or cultural differences that should hold you back from achieving your ultimate goal in life.” Her leadership prowess is in motivation and encouragement, and she sees her role as being, “a catalyst to help other people reach their leadership potential.”

When Daniel Murfitt started at Colenso, leadership roles were restricted to seniors, who went through a process similar to a job application, with references and an interview. “We’ve kept aspects because that’s real life, but that process excluded people in the school who were already in leadership roles but unrecognized as such, like leaders of our production, or leaders of kapa haka, or sports teams, or Pacifica.”

For Jenny Yule, “everyone has leadership potential,” and part of her business model is to support all involved in Porse to achieve their ambitions.

Magpies coach, Craig Philpot, says a big part of his leadership role, “Is raising self-awareness, because people often don’t realise their skills.” And being a rugby man, Craig thinks a leader needs to “put their balls on the line, and be a risk taker.”

Neil Taylor did warn that, “defining leadership is grasping at straws,” and he was sure Milton Friedman and Henry Mintzberg would agree.

“Look at our leading cancer researchers,” he said, “They don’t get the QSMs or leadership awards, but they are leaders, and in 50 years they’ll be recognised as great leaders in health research, who went unrecognised in their time.”

As noted earlier, leadership is defined in terms of historical context for Neil Taylor. “Slice of history,” he calls it.

But relevant right now, in today’s ‘slice of history,’ are the elections for local government, and who our leaders should be.

Liz Remmerswaal, retiring from the Regional Council after two terms, is clear about her approach to leadership. “It’s about developing relationships of trust and shared knowledge, and a lot of the work is talking with the people you represent, interacting with them, and finding out what they think.”

Clearly, as elected representatives, councillors need to make themselves available, and engage with the public. “When you’re elected to Council you become public property,” says Liz.

“So, when I’m out and about people will approach me and talk about issues, or they ring me at home at night, and I give them my time. It doesn’t matter when, or where it is, people want to discuss things.”

And prospective councillor’s might have to make some adjustments in their private lives.

“My kids won’t go to the supermarket with me any more because they know that I’ll probably have a long conversation with someone. Same at parties. I can spend the whole time talking to people about council matters. I accept that as part of the role, and part of the service.”

Liz Remmerswaal’s time on the Regional Council hasn’t been easy, because she is often a lone voice on environmental and transparency issues, but she is reluctant to discuss the politics that saw her bullied and marginalised.

Instead, she says, “Creating an atmosphere of good will and trust is essential for effective leadership, and healthy governance in any organisation allows for a diversity of opinions to be expressed. If you haven’t got a range of opinions, you can’t have a good discussion, and you can’t come to a balanced decision.”

So, as we ponder all the people offering themselves for election, deciding who will best represent us, your choices of who will make the most effective leaders are as good as mine.

But as Neil Taylor pointed out, “It’s not science, it’s not complicated, it’s not mathematical. A leader is no good unless they’ve got people who are prepared to follow them.”

And come 28 October we’ll know the leaders who attracted the most followers.