It is 13,000 years ago and Europe is still under a small ice age. A Paleolithic person is crouched by a river, which is already running high from autumn rains. She watches two reindeer swimming across, as they migrate south to warmer weather. The female leads with the male close in her wake almost touching her rear. They swim low in the water – only their raised heads are visible, keeping their nostrils clear, the male’s antlers pressed hard on his back. At the far side they shake their newly developing winter coats and head south.

Over the following days and nights the cave-person carves this into a carefully preserved mammoth tusk. The two animals follow the curve of the bone as they did in the arc of their swim. The proportions are perfect, every detail is faithfully recorded, even though most of the animals were invisible under water: the male’s antlers sunk into his fur, the shaggy streaks of the female’s new winter coat, the flared nostrils. 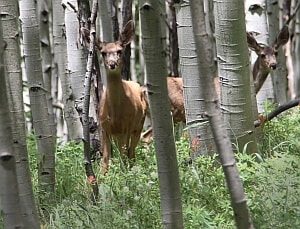 It is a remarkable achievement when we consider that it was all done by memory. There were no cameras or even sketchbooks then. The only carving tools were stone scrapers, and probably much of it was done by firelight. It is estimated to have taken about 400 hours so the tribe must have supported the artist.

According to archeological finds, humans have always made art, from the emergence of Homo sapiens roughly 100,000 years ago in Africa. The first humans arrived in Europe about 45,000 years ago when the climate was mild. But the first art did not appear there until about 40,000 years ago, which coincided with the start of an ice age that turned Europe into something like northern Canada today.

Conditions were harsh for all creatures, and it is remarkable we survived. Without the physical attributes of animals, our culture saw us through by passing on survival knowledge and wisdom from generation to generation.

Part of that culture is art. Art is a key component of our survival by giving us social cohesion and something to cling to. It must be vital to our existence if every single race has always done it ever since. But why did Paleolithic art usually depict only animals?

I was recently hiking alone in a forest in Utah. I avoid crowds and sometimes head off trail for seclusion. I don’t carry a tent, preferring to bivouac on the open ground.

I was sitting quietly after my dinner in a glade of pine trees. Suddenly the still evening was shattered by a violent crashing of the dry undergrowth. The hackles on my neck rose, a surge of adrenaline shot through me in fear, and I hissed reflexively.

But it was only a mule deer a few metres from me in the clearing. We had both frozen motionless and stared at each other, eye to eye, two creatures linked by the wide open gaze which was all that existed for us at that moment. Her big brown eyes were dilated and her expressive large ears were still, facing me like antennae. After what seemed an age, she slowly moved off with deliberate high stepping moves. Then she paused and turned back to peer, quizzically at me again from around a tree, before finally disappearing.

Now I don’t have a very good memory. But I remember that deer perfectly! Her image is etched into my adrenaline-fired brain. And it was such a beautiful experience that I am compelled to tell its story. This is what I believe explains the reindeer carving. It explains how the artist could memorise what they saw with such detail. It also starts to explain the ‘why?’

One of the most powerful emotions I felt in that experience was empathy with this wild free creature, something so rare for us today. In that empathy lay a feeling for the beauty of Nature and the free intuitive spirit of the animal. It suggests to me that this is what the Paleolithic artist also felt. They could sense something in the reindeer that they had lost: an intuitive connection to Nature.

The creatures were wild and free, they didn’t question or doubt, they knew instinctively when to migrate south, what food to eat, etc. But humans now had consciousness, had to make decisions, were worried about their survival, knew doubt. So they tried to re-connect to the wildlife they revered by depicting it in their art, trying to find that essence, that spark of life they had lost.

Anthropologists have tried unconvincingly to explain the amazing phenomenon of cave art as magic ritual to gain power over animals they hunted, or as a trance induced Shamanistic rite. But this belittles artists. We don’t need to use drugs or trance to create art.

In contrast, Clayton Eshleman in his book Juniper Fuse beautifully described cave art as “post cards of nostalgia”. I think he was right. We have done this art ever since. Later, we included the natural forms of vegetation and geology with animals and humans. Art, in its enduring reference to Nature, is our eternal longing for something we know we have lost. It is an expression of our need to reconnect. It helped us survive then.

We are in a new ice age: not climatic as the world is of course getting hotter. We are in the cold icy grip of globalised mega-corporations which are so big that they control governments, especially those like ours … only too keen to oblige. They care nothing for you, me or the environment; they care only for their profit, which many then stash away in tax-free off-shore accounts with impunity. Within their own limited left-brain thinking, it all makes rational sense; any feeling or empathy is irrelevant.

Global exploitation has become a relentless juggernaut that no one knows how to stop, even if we wanted to. It is destroying our environment; it will go on extracting fossil fuels, strip-mining mountains, polluting rivers and oceans as long as there is anything left to exploit, including people. It has shown absolutely no sign of being able to respond to the crises of global warming and pollution, which are still getting worse.

One solution is to swing our culture back to become more Romantic … one that values, even worships, Nature. We have to learn how to reconnect to our environment and to each other, and to express that to others so that they can do the same. If we all feel more care and empathy for Nature, we would be less likely to exploit and destroy it. In our cities, in our self-referential left-brain world, we are too abstracted from that which gives us life, clean air, fresh water and food from the soil; and which also takes our waste.

There is a new kind of art arising.

It is not object art, it is activism. Artists are planting vacant city lots with wildflowers; they are encouraging urban gardens, recycling trash into useful items, creating local currencies, uniting communities with music and events.

You can do this! You don’t need to be able to draw, but you do need to care. Every dollar you spend, every action you make is a vote for what you want. Each tiny incremental action makes a difference accumulatively. With this activism, we can shut out the cold throttling glaciers of mega-corporations.

We can create our own communities that are connected and caring. We can use our art as a social glue to make us strong and self-sufficient, like the Paleolithic artists did in the last ice age, so that we too survive.

We are all in this together.