THE BEST YEARS OF Our Lives: ‘Swallows’ leave at summer’s end

David and Morag Black have lived in Hawke’s Bay for most of their lives. It is where they raised their four children and made their living, and, for some of the year they still do.

They also make their living in England or Scotland, returning each UK summer to work. They return when the season is over to pick up their summer jobs in Hawke’s Bay. It is a lifestyle they love and which they feel privileged to be able to do.

It turns out that there is a large number of ‘swallows’ in New Zealand, people who step between countries and cultures year in and year out; spending typically six months here and six months there, for a variety of reasons. For most of us the thought of such disruption to one’s life routines couldn’t be imagined or endured; but for this group, this is their life’s routine.

David Black (known affectionately as ‘Blackie’ at the Cornwall Park Cricket Club, Hastings, where he works his Hawke’s Bay job) has found a niche using his cricket coaching skills in junior and women’s cricket at the Bath Cricket Club. Because of this link, junior cricketers of both clubs are involved in exchange visits. 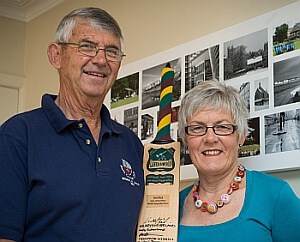 Recently, they lived in the World Heritage city of Bath in a house next to the Bath cricket ground and Morag worked in the bar of the Bath Rugby Club across the road, a popular stop for international rugby players.

Other years they managed a pub in the Scottish fishing village of Elie on the North Sea coast, with Morag as cook and David organising the cricket games played on the sands on summer Sundays at low tide.

The Blacks are age 65 and 63; they look a lot younger than their age and intend continuing with this lifestyle for as long as they can. This adaptable and outgoing couple have established wonderful relationships through their seasonal work over the ten years in the UK, loving the variety and challenge the lifestyle provides.

“We have been asked many times, both here and there, what we’ve been doing. And when we tell them, the incredulous response is, ‘Oh, I couldn’t do that,’ or ‘Gosh you’re so brave’.” Morag adds, “But brave has nothing to do with it; you just have to make the decision and then go and do it.” She believes people put themselves off by worrying thoughts of undergrounds, airports and long flights or fears of driving in foreign cities. “But,” she says, “you can do it if you put your mind to it.” It is fortunate that Morag and David have the same approach to their expeditions, their mottos are, “Give it a Go!” and “Home is where I live now.”

An experience branded in their memory was the day of the London bombings, 7 July 2005. On that day Morag and her friend were visiting London.

David: “I was in the cricket club and I got a text from Morag saying ‘We’re on the buses seeing London’. Then, I heard on the news that there had been a bomb blast on a London bus. I tried but could not get hold of her … no answer. I became convinced she had become a victim of the terrorist bombing.”

Morag: “All the networks were jammed and no one was able to use their phones. It was eerily quiet on the London streets, no buses or taxis or traffic. It just stopped; people were walking. We heard someone say, ‘A bomb’s gone off’, so we began walking back to our accommodation through Hyde Park, where we just sat and listened to the emergency sirens in the otherwise silent streets.”

Travelling as a Way of Life

Brian Kieran’s story is a life of travel – during his career as a merchant banker, the pursuit of his passionate interest in military history, and his compulsory six-monthly departures from New Zealand while awaiting NZ residency. He is now, at last, settled in Napier, having gained his much-treasured permanent residency in 2010. Today, his travel is devoted to visiting his widely dispersed family, but always with a bit of historical research on the side.

As a young man in the 1960s, Kieran trained as a barrister, but he dreamed of becoming involved in the exciting developments in air and space transport. However, the prosaic world of the British Inland Revenue claimed him and he became a specialist in tax law. After doing his time prosecuting tax evaders for 15 years the Englishman became a merchant banker during the 1980s and 1990s, travelling to cities around the world setting up companies while based in the Cayman Islands, and later, as a tax and business consultant in Hong Kong. 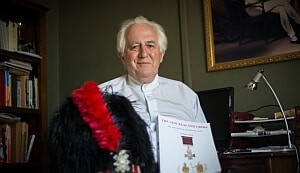 In 1997 a severe stroke at the age of 58 ended his career, paralyzing his right arm and leg, rendering him speechless and affecting his short-term memory. He was successfully rehabilitated in a clinic in Hong Kong, but has been permanently affected in his ability to calculate numbers or to adapt to the evolutions of the computer age.

Two years later in 1999, when he was sufficiently recovered, he visited New Zealand and fell in love with the sea and the sky of the Napier coastline and very much wanted to live here. And so began the ten year process towards gaining New Zealand residency. Every six months he had to leave and stay away for six months before returning, an interruption to his life that he turned to good effect by using it as an opportunity to do original research in war archives around the world.

It is all the more remarkable that following his two-year rehabilitation period he studied for his MA and PhD in military history – a story of determination and making the most of what you have been given.

During that decade (2000-2010) he was fortunate, given his disability, that the war museums of the world had not yet fully moved into digital archiving, thus providing a window of time when he could do original research in the old style. He was able to visit the war archives, find original documents, explore linkages to people, dates and events and bring his research back to Napier, where it was collated into his current book project.

Today, he is Doctor Brian Kieran, author of seven specialist books on events in military history and international tax law. The books are a culmination of his lifelong interests and original research conducted at the National War Archives in Kingston Jamaica, Vancouver, Ottawa, Belgium, Delhi, Hong Kong, Sydney, Melbourne, London and Wellington. Two of his recent books relate to this country: The Military Heritage of Streets of Napier (2010) and The New Zealand Cross – the Rarest Bravery Award in the World (2013).

In 2006 Brian met and married Ros, a New Zealand nurse, who lived next door to his home in Taradale. They share a lively interest in military history. Ros has strong military links through the generations of her family and an interest in collecting war medals and memorabilia, so now when they visit their families, historical research projects are an important part of their overseas travel.