What’s in a Name?

“Naturally regenerating bush is unbelievably sprayed and destroyed by a greedy farmer. The forest has evolved for these conditions; the totally unsuitable grassland has not. In a storm slips will wash out much of the perilously thin soil.”

Some say that to name is to own. By classifying and naming the natural world, man started to own it. The nebulous mass of green stuff around us became individual trees and plants, each with a use. Now governments use euphemisms to hide unpalatable reality: murdered civilians become ‘collateral damage’.

To some farmers that flow of water is a drain; to someone who loves nature, it is a stream. The drain name is dismissive, denying its intrinsic value. It is something opened out with a digger to remove inconvenient water from land that is used for business. The farmer owns it.

To call it a stream gives it significance. It is not just a means of directing water; it is a whole ecosystem in itself, supporting thousands of different life forms. And it is a vital part of a larger ecosystem, including the farm. 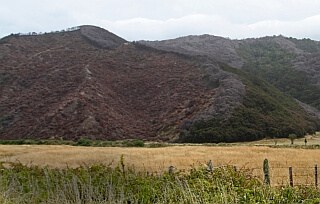 To Māori it is a source of inanga and kōura and drinking water. It will have its own name, probably recited in someone’s mihimihi. But no one owns it. Water has flowed down from springs on the hillside for far longer than man’s existence here.

A dispute arises. One side calls the stream a drain; we can do what we like with it. The other side says you have no right to threaten natural systems that go beyond your reach, purely for personal gain.

This dispute exposes the great divide that slashes right through our society, not just in New Zealand, but globally. On the one side personal gain, on the other side caring: settler mentality versus the ecologist; business profit versus environmentalism. It will only get worse as populations grow and our pressure on the environment increases.

Throughout our history human culture has been a writhing, fertile, internecine tussle of ideologies, beliefs, religions and politics. Even though this has led to suffering, in general, the more the friction the more the creativity. Single ideologies have led to stasis. There have been no absolutes: every ideology is only relative to another and in the end the best course has been to agree to differ.

Until now. At some point in the 1980s the human race started to use more than the earth can supply. We are no longer sustainable. We are living off the capital, not the interest. Now it is not a matter of opinion to say we use too much – it is a fact, it is absolute. We are uncomfortably aware of the limits of the planet. That changes everything.

Others refuse to listen. They are profiting well from the way things are and they are certainly not going to let that go. They try to prolong the world of relative ideologies by portraying the opposition as just another (probably subversive) one. To admit the absolute factor is too much of a threat to their status.

And so we have the confrontation across the stream/drain. The exploitative settler mentality lives on strongly in our country, ably encouraged by our government and our greed for profit. The land is a resource to be mined, dammed, drilled, and farmed to the limit and beyond. The ‘benefits’ (i.e., profits for a very few) outweigh the consequences, which can be left for the future (i.e., the rest of us).

Those on the other side are there, not for personal gain, but simply because they care; because they see the bigger picture, which does not have themselves at the centre. Our legal and governing system is against them because it sees the land as a resource to be exploited. The only way the Māori Trust values land is by the stock unit – the number of sheep or cattle per hectare that it can sustain. So the wooded hillside above the stream is virtually worthless because the stock units are so low. No value is given to its environmental diversity, its springs which feed the stream, the carbon sequestering trees, the history of Māori settlement and gardening.

Despite our entrenched positions on both sides, we all know this. But what can we do? How do we break the impasse? The more one side shouts, the more the other will dig in and resist. Time and accelerating events will eventually force us to accept the fact of over-exploitation, but by then it will be too late to prevent permanent damage to our life support systems.

If people don’t care I don’t know how you can make them. I recently visited a place which was a complete mess. The house was tattered, ugly and threadbare; the garden was neglected and full of dog turds. Yet the owners were not poor, and even if they were that is not a barrier to the many beautifully kept homes I have seen in very poor countries. If people can’t care about their immediate surroundings, which they see every day, how can they care about anything beyond them? Perhaps the ease of our lives makes caring redundant: “Ah, just chuck it and buy a new one.”

I am constantly amazed at how humans are able to utterly disconnect and abuse another living, feeling human being. I saw a documentary exposé of the Asian sex trade where young girls, barely teenagers, are rented to rich visitors for months at a time. The kids end up traumatised and seriously injured. How can one person do this to another? Is this some result of the power gained by money that makes them so totally uncaring for others?

In a lesser way, does the same thing happen to people in our affluent society, when we become indifferent to anything beyond ourselves? I can sort of understand it in hard times when it is a survival issue. Has our wealth and comfort made us indifferent to the discomfort of people, let alone flora and fauna? If so, it is a terrible price to pay!

The best example of bridge building that I can offer is Herbert Guthrie-Smith and his book … Tutira – the story of a New Zealand sheep station. He came to the country in 1880 as a farmer and developed the rugged country around Lake Tutira into a profitable farm of 60,000 acres running up to 32,000 sheep. Initially his ambitious plans even extended to filling in the lake and planting rows of fruit trees. But over time his sensitivities to the land and the traditional Māori ways changed him into one of our first environmentalists.

In his book he writes about “the ruin of a Fauna and Flora unique in the world – a sad, bad, mad, incomprehensible business.” Today the Guthrie-Smith Outdoor Education Centre has been set up to instil his values into our young generations.

The story of his amazing conversion needs to be insistently spread throughout our society. He set out as a settler and the land turned him into someone who cared. He crossed the drain and it became a stream.