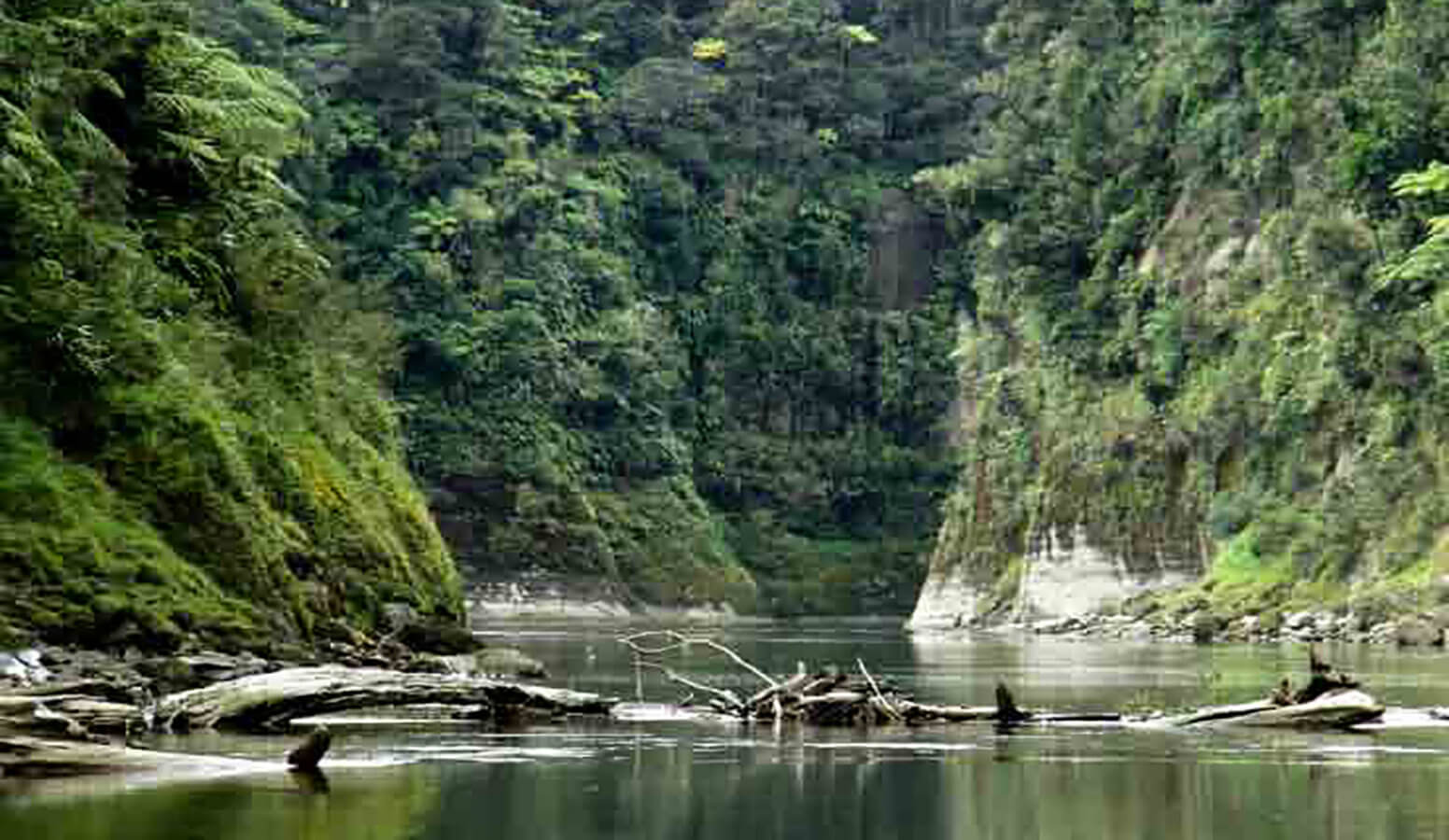 The rights of nature

Last November, David Trubridge was invited to speak at the ‘A Place to Live’ conference in Whanganui which “focused on ways of improving the environments and economies of our regions and smaller centres, and the human need to connect with the natural environment.” Here is his response to what he heard, particularly to the opening address by Dame Anne Salmond called ‘Rivers – Give Me the Water of Life’, which was the fourth of her 2014 Rutherford Lectures, ‘Experiments across Worlds’.

In 2010 Bolivia made history by being the first country to pass into law the universal rights of nature.

Described as being one of the most radical environmental bills in global history, it enshrines the rights of nature to life, regeneration, biodiversity, water, clean air, balance and restoration. It is based on indigenous concepts of nature as a sacred home, stating “Mother Earth is a living dynamic system made up of the undivided community of all living beings, who are all interconnected, interdependent and complementary, sharing a common destiny.”

Ecuador followed with something similar (though it does not seem to have held them back from drilling for oil in the Amazon rainforest).

Does that sound just too way out and “new age”, something that would never happen here? Think again.

The foundation of the Deed of Settlement between the Whanganui River iwi and the Crown is the recognition that the river is a legal entity, in other words, a personality, which is known as Te Awa Tupua (the giant river). This is seen as groundbreaking, particularly because it was made by the government of a country still nominally overseen by the Queen of England.

Previously in BayBuzz I wrote about “the great divide that slashes right through our society, not just in New Zealand but globally. On the one side personal gain, on the other side caring – settler mentality versus the ecologist; business profit versus environmentalism.” You could say the past versus the future!

Are we at a turning point in the global zeitgeist where the old western attitude of nature as a resource to be exploited is being replaced by a greater sensitivity to our balance with nature?

The conference in Whanganui opened with a brilliant lecture by Dame Anne Salmond in which she discussed this issue. She described the radical split in western society between nature and culture, and how this developed during the Age of the Enlightenment, just when Cook was setting out for the South Pacific.

At that time, life on Earth was arranged into ‘The Giant Chain of Being’, a pyramid with man as the culmination at the top who had dominion over diminishing layers of animals, insects, plants and finally rocks at the bottom. As new lands were ‘discovered’ they were divided up by surveyors’ grids. The overall entity of nature was broken into square parcels of land – commodities which could be bought or sold and used as a resource.

Dame Anne described how, in Maori cosmology, matter has never been dead or separate from people. Maori do not control nature; they believe that lakes, rivers and forests have their own right to life. In particular, the mauri, the spirit of fresh water, is regarded by mana whenua as the basis for all wellbeing.

They have no neat single theory of everything – instead, “ancestral Maori concepts exist in the spaces in-between where dimensions intersect.” Maori stories and chants do not express a different opinion or explanation, they describe a wholly different world. This is neither utopian nor idealistic; it is necessary for the health of the people and of the land.

So this new river settlement law represents a tectonic shift away from the old hierarchical European legal system. Instead of encouraging settlertype exploitation of the land, it starts to recognise the balance of all living things and that we have some responsibilities for nature. It is moving towards the Bolivian law that embraces the very different world view of indigenous peoples. And in doing so it opens up exciting environmental possibilities. Imagine the consequences: if a company can be convicted because its pollution damaged my health, then the same can happen if it affects the health of the river.

However, in a sense we have already been acknowledging nature’s rights. The large amount of public money that was used by DoC to save the Chatham Island robin and to bring back numbers of takahe and tieke (saddlebacks) is in effect a recognition that these creatures have a right to exist.

Humans are only one tiny part of nature – we have no god-given powers over others. Only nature can take away a species’ existence, like it has done to all those now extinct. If by our actions we endanger a species, it is our duty to respect the equal rights of that species and to protect it.

Sadly, despite the river settlement, our government has shown little commitment to the environment. It prefers to protect a few fishing jobs in favour of the right of the Hector and Maui dolphins to exist, and refuses to admit that off-shore oil drilling and seismic testing are serious threats to oceanic life, as scientists have shown.

There are many people who already feel that nature has a life of its own. Who has not hiked along a river for hours or even days and been overwhelmed by its presence?

On long hikes I have got to know the character of South Island rivers as I learnt to pick angled shallow bars to make the many crossings. I have slept with the roar or chuckle of the Mohaka in my ears, been moved by its raging froth and tranquil swirling silence. As they say on the Whanaganui, “I am the river and the river is me”.

At the Barlow Hut on the Makaroro River I have anxiously watched the rising waters during a storm, and hurried off down the only exit along the river in predawn light before it got too deep. Now the Makaroro’s life is threatened by the Ruataniwha dam.

Anne Salmond also described how Maori say that they are the fresh water as it twists and braids out into the salt waters of the oceans, which they see as the pakeha who came on its waters from afar. We all mingle together at the great mouth of the vortex which breathes the winds and tides of the oceans. The rivers and seas are all totally interconnected.