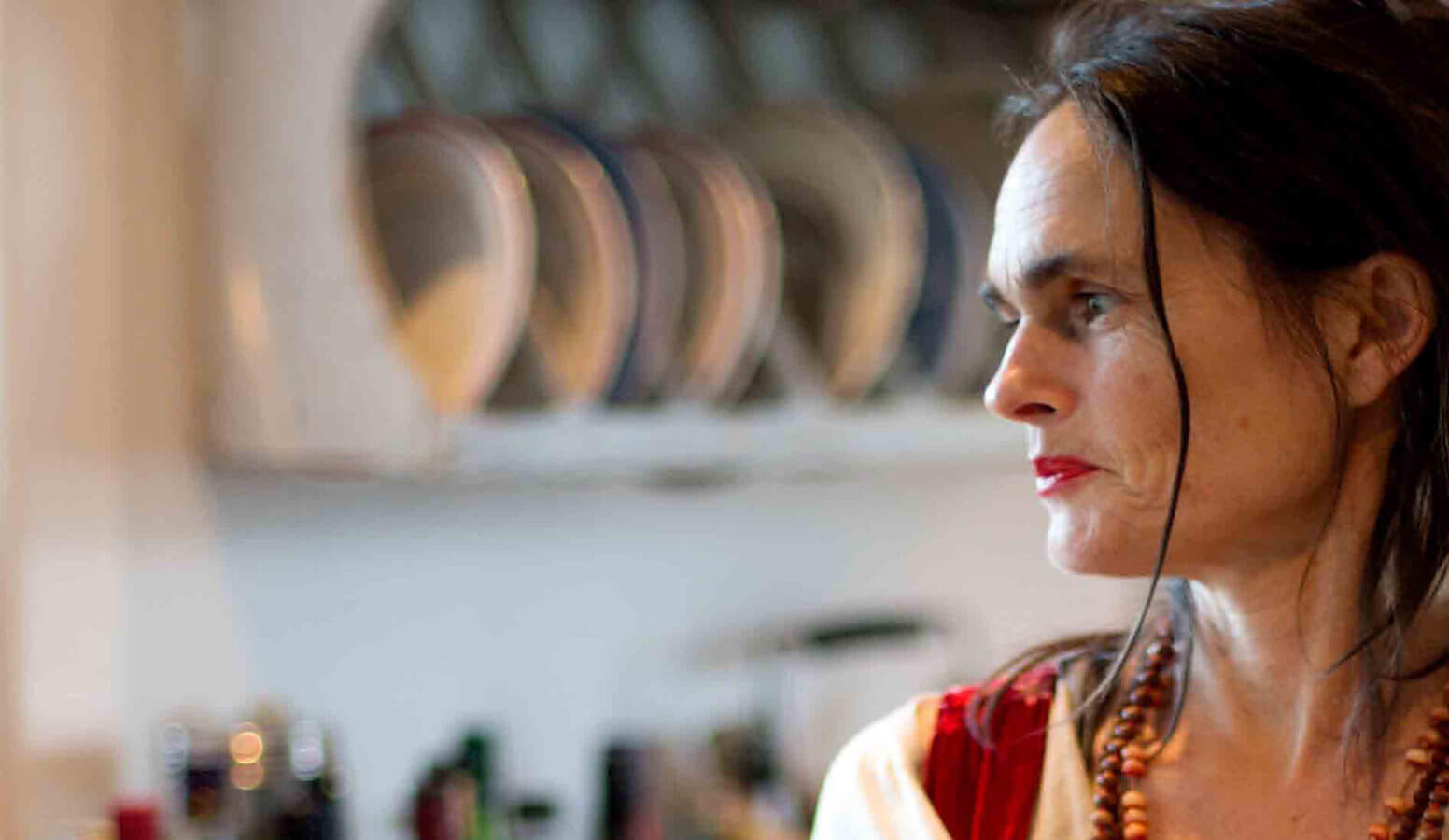 I love the ceremony of food. The rituals and the immediacy of it. The excitement when it is feijoa season again and golden queen, whitebait, basil and cherry. Or when you discover a particularly delicious new type of cheese and you start thinking about what to eat with it and under it and drink alongside it.

Also the way it is such a basic need and desire … it brings everyone back to the earth or the sea or the land and to their own roots.

We have all had lots of great meals, but for me it is the ones where there is no expectation that I remember. And often it was not the actual food but more the events that led up to it, or surrounded it. So, I am going to tell you about my top five food experiences of all time … the ones that have stuck with me, and influenced how and why I cook the way I do. 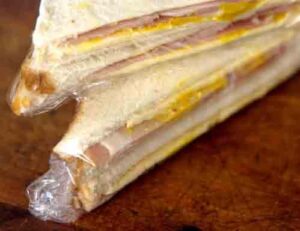 Now this is a funny one, but to me it shows that with food it is not always about how amazing the actual dish is, but how hungry you are and the situation.

A friend and I had hitchhiked from Dunedin for a 21st in Timaru. We had not left Dunedin until it was getting dark and after a few very short rides ended up flagging down a bus. We had not had dinner properly or much lunch, I was rather cold and very hungry by the time the bus eventually dropped us at the Timaru railway station.

As soon as we got there we rushed to the cafeteria only to find that all they had left were some of those sandwiches made of thin white bread with one piece of dodgy ham, thin slice of processed cheese, and a thin layer of bright yellow mustard. So that was what we ate and I still remember how good it was.

The funny thing is, try as I do, even though I have often bought them again when we are on a road trip, I have never been able to recreate that feeling or capture the taste again. Maybe I will have to go back to Timaru, but somehow I think I am better off just to keep that memory a memory and simply enjoy that. 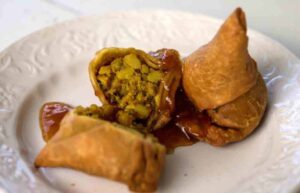 I had been on a trek for two days which went from Darjeeling up into the surrounding hills; from there you could see across to the range of mountains that Mt Everest is part of. The track was lined with wild rhododendrons and orchards and you stayed in private houses along the way and ate whatever they were having.

By the time I got back to Darjeeling I was ready for a hot shower and food. We stopped at a local café which was full up with locals; not a tourist in sight. They all seemed to be eating tiny samosas, plucked out of a big round oven by a man sitting cross-legged on top of it, so I had some too and did again and again.

The pastry was deliciously flakey without being too rich or heavy, the filling was spicy, but not too spicy, and with the sweet fruity sauce that it came with, it was the perfect meal.

I have always meant to try and make some myself, but the problem is I don’t have the right oven or atmosphere, so really all I can do is go back to Darjeeling and try and find that café.

I had just found out I was pregnant with Henry by a doctor who could speak no English, but instead made large gestures over my tummy and had a huge grin on his face. And all the nurses stooped around making the same gestures and rubbing and poking my tummy.

We were on our way home from a three year stint in London and had stopped in Athens to catch up with all the Greek goddesses and visit the Parthenon.

We were nervously waiting at the airport for our plane; we had some cheap deal where they did not allocate seats. Instead there was a mad scramble for seats when they opened the door as everyone ran to get one as apparently they always over-booked the flights.

Suddenly I spotted a man selling round bread things. They were shaped like doughnuts, but bigger and thinner. I bought one; it was chewy and soft with a delicate very moreish flavor. I ate quite a few and the morning sickness I was feeling, for a while at least, was relieved. I decided actually I could quite happily live out my pregnacy here at the Athens airport eating these bread things.

But of course suddenly the doors opened and we rushed on, just getting a seat, and that was that. I have never tasted anything like them again, but I live in hope.

Logan Brown in Wellington can be rather intimidating I suppose and formal. But for the first three years of its conception, when I was living in Wellington in a warehouse behind the St James and Mermaids, it was our local.

I worked long days and often the thought of cooking was tiring. It was a much easer option to just pop into Logan Brown on our way home, before they had their main dinner rush.

I nearly always had either the crab cakes or the tuna tempura and they would cook Henry a simple piece of chicken or steak. And then sometimes when I needed a place to celebrate it worked equally as well, just add a bottle of champagne to that and you were done.

It was the familiarity, not having to think, the service, the high stud, and easy good taste. It was always the same, but then different enough to be still interesting. For those three years it was a part of our lives like a flatmate might be. We shared birthdays, work stuff and an awful lot of weekday meals.

Also Al Brown’s food tastes like it is made with a lot of genuine care and a real understanding of flavours. And if his Depot Eatery was in Hawke’s Bay we would be there. As it is, we have been known to drive to Auckland just for dinner because one of us really felt like one of their fish sliders, or braised bone marrow. 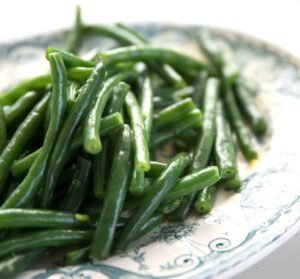 My uncle Charles lived in Fulham in London. One time when I was in between jobs he asked me to come and clean his house. He had one of those tall skinny fivestory terrace houses and it was full of years of accumulated life, so cleaning it was quite a thing.

Charles was rather exotic to me. He was an artist who I met for the first time the day before my first wedding. But at the same time he looked and spoke just like my father and his home was filled with paintings of rural scenes in the Wairarapa, so being with him in London was a lovely experience.

When I had cleaned for a while he suggested we walk down to his allotment garden, which was next to the Thames River, and pick some beans. The allotment was very social with everyone chatting in a friendly competitive way about their vegetables and flowers.

Later at home we had the beans smothered in butter and salt and pepper (just as Alice Tylee, my grandmother and his mother, used to cook them), with chicken, sitting out in his tiny little back garden. They were the best beans I have ever tasted, sweet and tender.

Maybe it was the air or the water, who knows. I don’t care; I am just glad I was there with Charles eating them. 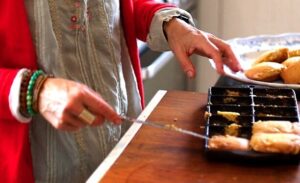 I was in Italy to taste espresso blends with our green coffee bean wholesaler, but had stopped in Florence to meet the owners of La Marzocca espresso machines.

First he showed me his factory and an amazing museum full of vintage La Marzoccas. Then he took me to lunch at what he said was a typical Florentine restaurant. It was not grand, but very classically Italian. All the waiters were grandfathers … maybe great-grandfathers. Anyway I had no expectation of what was to follow but will try to convey the enormity of the experience.

We started with a tortellini in a beef consume. The flavour of the consume was delicate and strong at the same time, while the pasta was as soft as soft and melted away in your mouth.

Next, chicken breasts, grilled over hot coals and then slowly cooked in pounds of butter, was something I will never forget. Served with just a perfectly dressed rocket salad.

Pudding was wild raspberries just picked from the hills around Florence. I love raspberries and wild ones are so much better. When the waiters described them I got a vision of the old men still in their black and white outfits, carrying wicker baskets and walking in the forests up above Florence collecting these raspberries themselves.

It was the simplicity, the understated dignity that over delivered, the thick worn plates, water tumblers, the waiting staff and the smells coming from the tiny kitchen. The quiet confidence and permanence of it all, which gave you room to breathe, so you could really relax and experience the restaurant properly.

All of these experiences and others like them have helped to deepen my delight and fascination with food. It is about nutrition certainly and that is very important, but food seems to also have, given the right situation, the ability to transform not just itself but its surroundings.