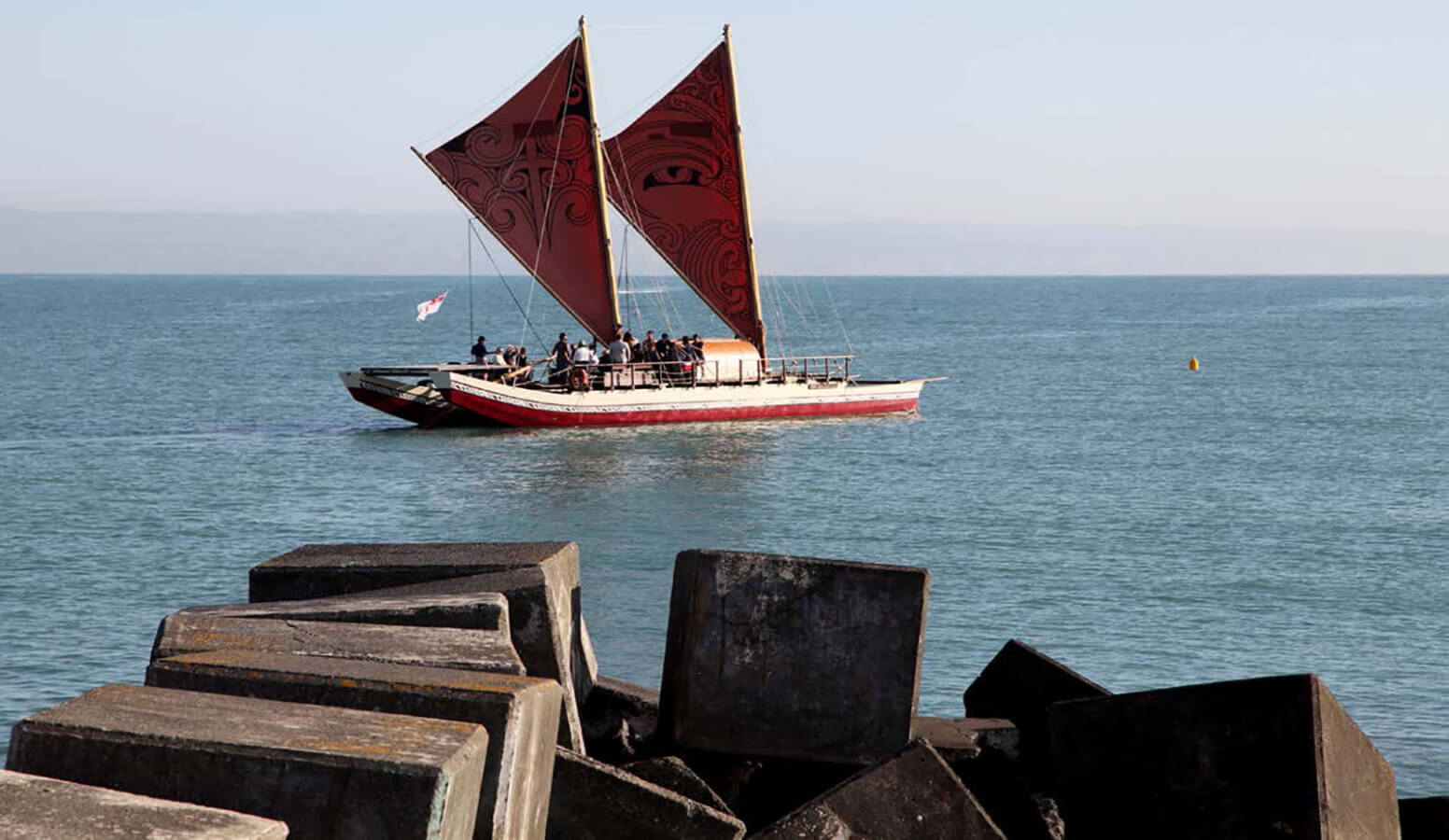 LEARNING FROM THE PAST

Recently I took my design team out on the local sailing waka ‘Matau a Maui’ from Ahuriri. It was an exhilarating physical and cultural experience, wonderfully managed with amazing home-made food.

The waka is one of seven identical modern day replica double-hulled sailing canoes built in New Zealand for various coastal iwi. These waka are part of a Pacific-wide revival of traditional Polynesian ocean sailing canoes that started with the Hokule’a in Hawaii in 1976. Recently this fleet of seven encircled the Pacific, using only non-instrument navigation. These and other voyages like them have shown how it was possible for early Polynesians to colonise the Pacific.

From when I first sailed across the Pacific in my own ‘waka’ I have been fascinated and inspired by the Polynesians’ sea-craft. They were already making ocean voyages 3-4,000 years ago when Britons could barely cross a river in a coracle. Yet well into the late 20th century, there was fierce debate about how the widely scattered islands of Polynesia came to be populated. Some scientists argued that the islanders were too primitive to build sea-worthy boats: how could they navigate, how could they sail westward against the prevailing easterly trade winds. Their spread must have been accidental.

This ignorance and outrageous cultural denigration was more of a reflection on the arrogance of armchair academics and imperialism. Even Captain Cook, with the limited knowledge of his day, had correctly traced the Polynesians’ forebears back to the southeast Asian archipelagos through linguistic links. He asked the Tahitians how they sailed east and they said simply, “we wait for the one of the brief wind shifts to the west … if we miss our target we can always be sure the trade wind will return and take us home.” Exploring downwind into the unknown would have been suicidal, but try explaining that to an academic or Thor Heyerdahl!

There was no pressing need for the early Polynesians to find new lands as their islands were lightly populated. They were driven by human curiosity and need for adventure. We will never know exactly what their canoes looked like because none have survived. Since then canoes have evolved for different purposes. As the islands came under population pressure, canoes were built for warfare and limited local trading, so that by Cook’s time long voyaging had died out. Later colonial masters forbade even local inter-island sailing. Today’s replicas are reverse extrapolations based on the sound assumption that they must have been double hulled vessels which were slower but more stable and capable of carrying loads than the common outrigger canoes.

How they navigated is harder to prove. In the last fifty years a number of researchers have interviewed the few remaining Pacific navigators, mostly in the Micronesian islands. One of them, Mau Pilaug from Salawat in the Carolines, sailed on the first Hokule’a voyage to Tahiti as navigator and amazed everyone by making a successful landfall. This was far out of his home territory and proved that the islanders had a prodigious knowledge of the movement of the stars.

Nainoa Thompson from Hawai’i, who sailed with Mau soon after, went on to develop his own hybrid of Pacific/western navigation that is now used by all the replica voyagers. He did this with the help of the Planetarium at the Bishop Museum in Honolulu where he studied the movement of all the major stars. He memorised the directions (azimuth) of their rising and setting and their height (altitude) at their zenith, going on to learn how to adjust these figures for any latitude (north\ or south). This enabled him to know his precise latitude in degrees (though latitude and longitude as a grid on the globe was a concept unknown to the Pacific islanders, as was the idea of the cosmic sphere). However Nainoa has no way of finding his longitude (east or west) except by dead reckoning. Therefore he has to keep a very close sense of distance covered, in a similar way to early western navigators before the chronometer allowed them to calculate longitude.

However it is my hunch that Pacific islanders could also calculate some form of east/west positioning. Tupaia, the Tahitian aroi (a form of noble-born priest) and navigator, sailed with Cook to Indonesia via New Zealand and Australia. All the way he was said to have been able to point accurately in the direction of Tahiti. Given their meandering course this would have been impossible by dead reckoning so something else must have been happening.

The Islanders did not have our rational science and overview of the cosmos and star movements, so they must have developed a keenly intuitive understanding of the movement of the heavens around them. From the youngest age a navigator had to dedicate every day to learning and this eventually gave them great mana. The knowledge slowly built as it passed down through generations. So they became able to position themselves both north/south and east/west just from the stars, which I believe is theoretically possible. In addition they did this without visualising a chart as Nainoa does.

Here I think is the nub. Our dependance on our science and technology has become so total that we have lost contact with the finer nuances of the natural world. No one today can navigate like the Islanders did 500 or 1000 years ago. That is why the voyaging revival is so attractive: it gets people out from their machine-made comforts into the physical reality of nature, which is so much more complex than all our imaginings and explanations. And that is why it is also so important!

We are at a turning point in our civilization, where we are realising that technology and science not only don’t give ALL the answers, but that they also contribute to the destruction of our habitat. There needs to be a decisive shift in our patterns of living, away from consumption and hedonism and towards respecting and nurturing our life-support systems.

The Paris Climate Change Accord has finally accepted that. The general agreement is that we must now move very fast to implement it, but politicians still don’t seem to get it. Our pitiful apology for a government is one of the worst and it has become very evident that they will continue doing nothing.

It is therefore up to us. Instead of getting our kicks from imported trail bikes or jet skis, why not go waka ama paddling or enrol in one of the Matau a Maui voyages? Not only will the experience be physically rewarding, it will also instil a great understanding and respect for the voyaging of the first people of Aotearoa.

All across the Pacific young islanders are regaining a sense of pride in their culture and in themselves through sailing their replica canoes. This puts them in touch with nature, building a healthy sense of awe and wonder. They are also learning about the ocean that surrounds them and how it is being destroyed by pollution and global warming. Hopefully that will make them try harder to save it. And in some form or other, this is something we can all do and learn from.