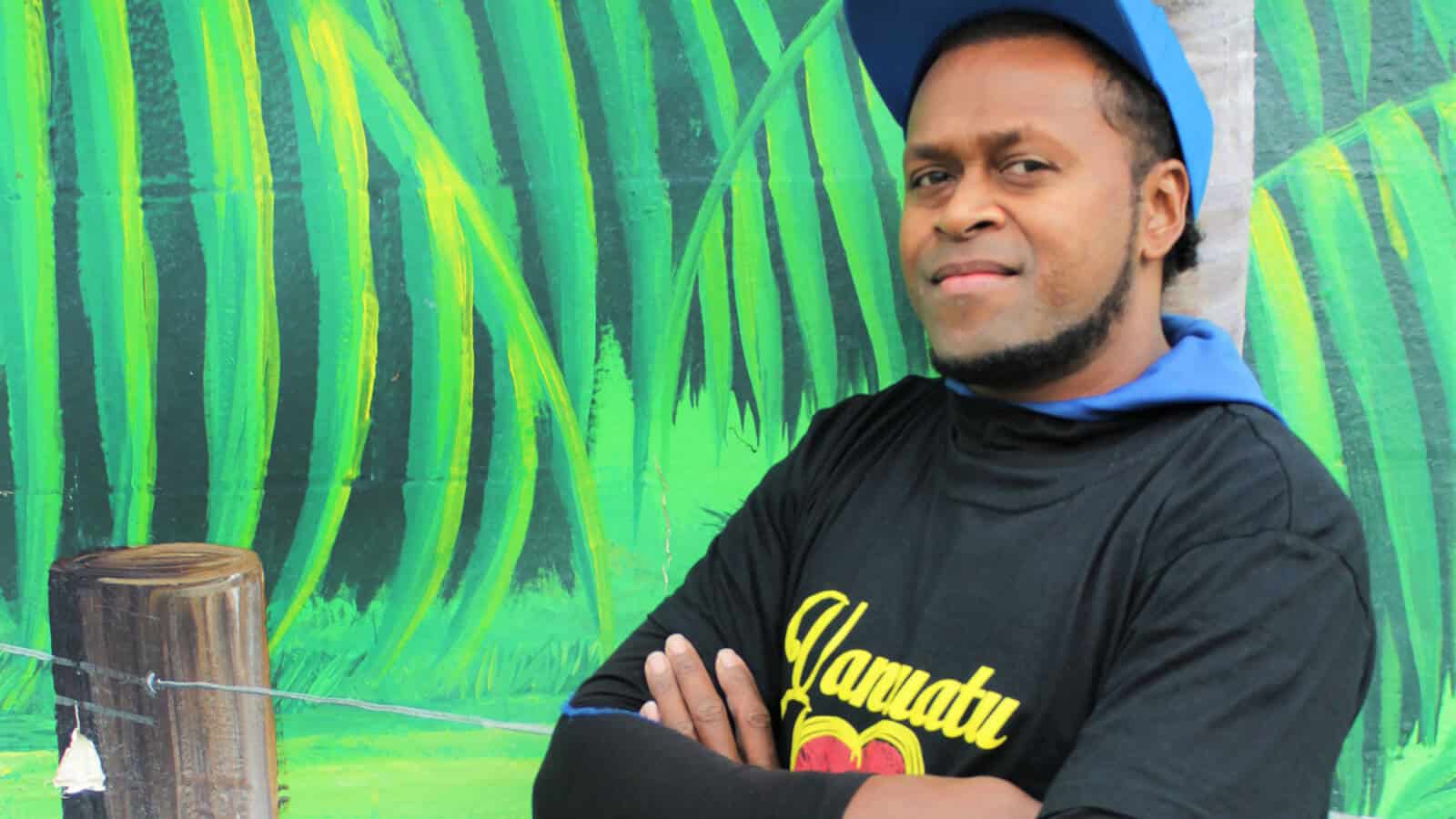 The classroom is a pre-fab. Nearby, an ex-school hall has been converted to a lounge with comfy sofas and chairs, big flat screen TV, and a pool table. Across the driveway is a dining room and kitchen, and in a long low building beside apple trees, are the sleeping quarters.

It is nearly seven o’clock. Men have finished their evening meal and are making their way to the lounge. They’ve had a long day picking and won’t be staying long. They have a five o’clock start in the morning.

The accommodation and facilities are provided by their employer, a fruit grower, as part of the Recognised Seasonal Employer (RSE) scheme, which sees around 3,500 Pacific Islanders living and working in Hawke’s Bay during the fruit-picking season.

In the classroom, Pauline Hayes is turning on the computers and making sure the overhead monitor is working. Her password doesn’t pass and she calls a colleague for help. All is well by the time a mini-bus pulls up outside and a group of men take their seats for their first lesson in computer use.

These men too have worked all day, and they have yet to eat. Pauline has brought chicken and bread and salad. But the lesson comes first, and it’s soon obvious that enthusiasm to learn computer skills outweighs thoughts of food.

Most of the men have cell phones; they text, and talk, and Google, but none have used a computer before. Pauline asks them to write about themselves; their names, where they are from, who comprise their families. She shows how to create a Word document, how to connect to the web, and how to download photos from websites and attach it to the text. Most have no trouble with using the keyboard; the configuration is the same as their phones. And a printer churns out a hard copy of each man’s story and a picture.

In Havelock North more RSE workers have gathered at the Arohanui Centre in Middle Road. There are five women in the group of mostly men, and four are learning to use modern sewing machines, but one woman stays with the men to hear Matt Stewart talk about chainsaws. She tells the group she has a chainsaw
back home.

Maintenance and safety is the main message, but not until Matt introduces his six chainsaws, each one bigger than the other, and talks about cross-cut and ripper chains, and long bars, and girth and grunt. He has his audience intrigued when he strips down a chainsaw, pointing out where and what is damaged when they aren’t maintained properly, or are fed the wrong fuel mix. Filters, chains, carburettors and clutches are passed around, and Matt has some practical gauges for measuring the 50:1 fuel to oil ratio. “No,” he says to a question, “a cap of cooking oil is not okay.”

In a room next-door Liz Maddock is showing her students how to size patterns for dress making, and each has a near-new machine to sew on. Later she will assist her students in choosing durable models most suitable for purchase to take back home.

Liz Maddock is regional co-ordinator for the education programme, Vakameasina, which in 2016 is fully subscribed with over 800 places filled by RSE workers.

The RSE scheme brings workers from Kiribati, Tuvalu, Vanuatu, Solomon Islands, Papua New Guinea, Fiji, Samoa, and Tonga to Hawke’s Bay to prune, pick, and pack. They play a vital role in the fruit-growing and viticulture industries. Without them much of the fruit wouldn’t come off the trees and grapes wouldn’t make their way to the bottle.

“It is not easy for them,” says Liz Maddock, “they are separated from their families, and living in a very different environment and culture. And it’s hard work.” 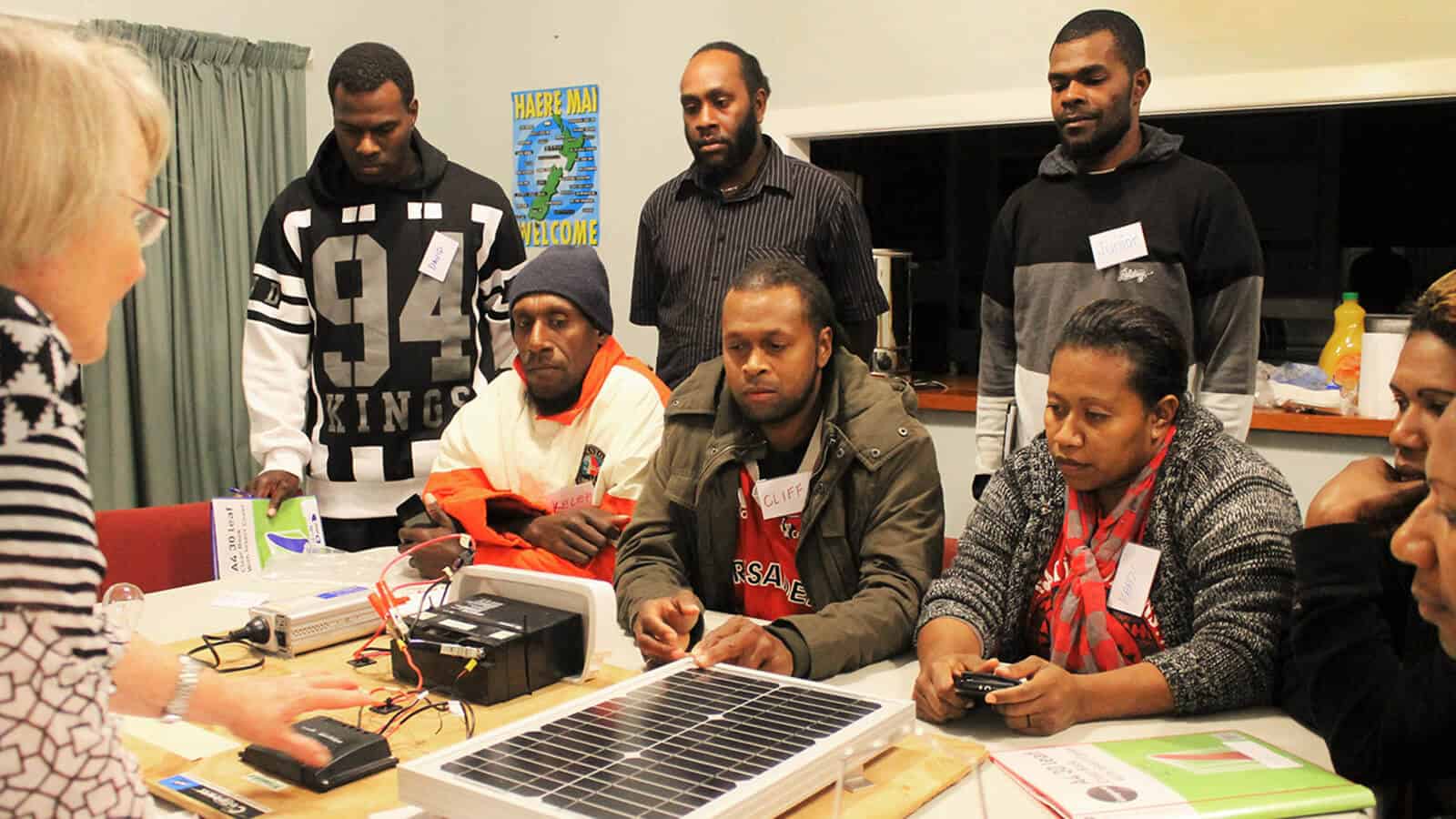 Vakameasina began in 2010 after a government review of the first year of the RSE scheme decided ‘to fund a pilot training scheme to lift the literacy, numeracy and financial literacy of RSE adult migrant workers, who often had relatively limited formal education.’ (Roorda, 2011- www.aid.govt.nz)

“Some students have never been to school and have low literacy skills,” confirms Liz Maddock, “but some, women especially, can have great numeracy skills from selling in the market. They can calculate much quicker than I can.”

The scheme is funded through the New Zealand Aid Programme of the Ministry of Foreign Affairs and Trade. Fruition Horticulture (BOP) Ltd were the successful tenderers to design and deliver a training programme. In consultation they identified five core modules around which to teach literacy and numeracy skills:

These topics are taught in night classes, and extensively covered on the Vakameasina website (www.vakameasina.co.nz), and for all but Health and Safety, are straightforward to teach.

As Liz Maddock explains: “We have developed ways to help students take responsibility for their personal health, including eating well, hygiene, and
sexual health.”

Assisting in developing resources was Gill Lough, now retired, but formally a family planning health promoter based in Hawke’s Bay.

Lough was first involved in the RSE scheme in 2009 when she assisted with a programme for the employers, educating them about recognising health issues, and how best to help their workers.

“We learn how to convert a grass cutter to an outboard motor by putting a propellor on the end. That was very useful. And we learn how to use a bicycle to make power by attaching an alternator to charge a battery.”

Later she worked directly with workers and soon saw the importance “to be careful that the messages being given are the correct messages.” And she recalls an experience when, “talking with a group in Hastings about healthy food they said they didn’t eat fish,” because it was not healthy food. “Someone had told them fish and chips were bad for you.” Of course, it was the frying in oil process that was unhealthy, not the fish itself.

“A simple health responsibility is to wash hands after going to the toilet, which isn’t always practised in some cultures. In the class washing hands is linked to singing happy birthday, and once when I visited a group of women, I could hear them singing happy birthday from the bathroom, and I fed that back to the teachers; that the students were integrating that part of the programme and remembering to do it. It sounds simple, but it’s an example of linking English teaching to washing hands, and our resource was working.”

Liz Maddock saw the need to include the most delicate of health issues, sexual health, into the programme and with her background in family planning, Gill Lough, was invited to develop resources that made it easy to talk about sexual health in a way that was inclusive and unthreatening.

“The basis was keeping yourself safe,” says Maddock, “and Gill developed a card based system around the appropriateness of behaviour; what is okay, and what is not okay.” 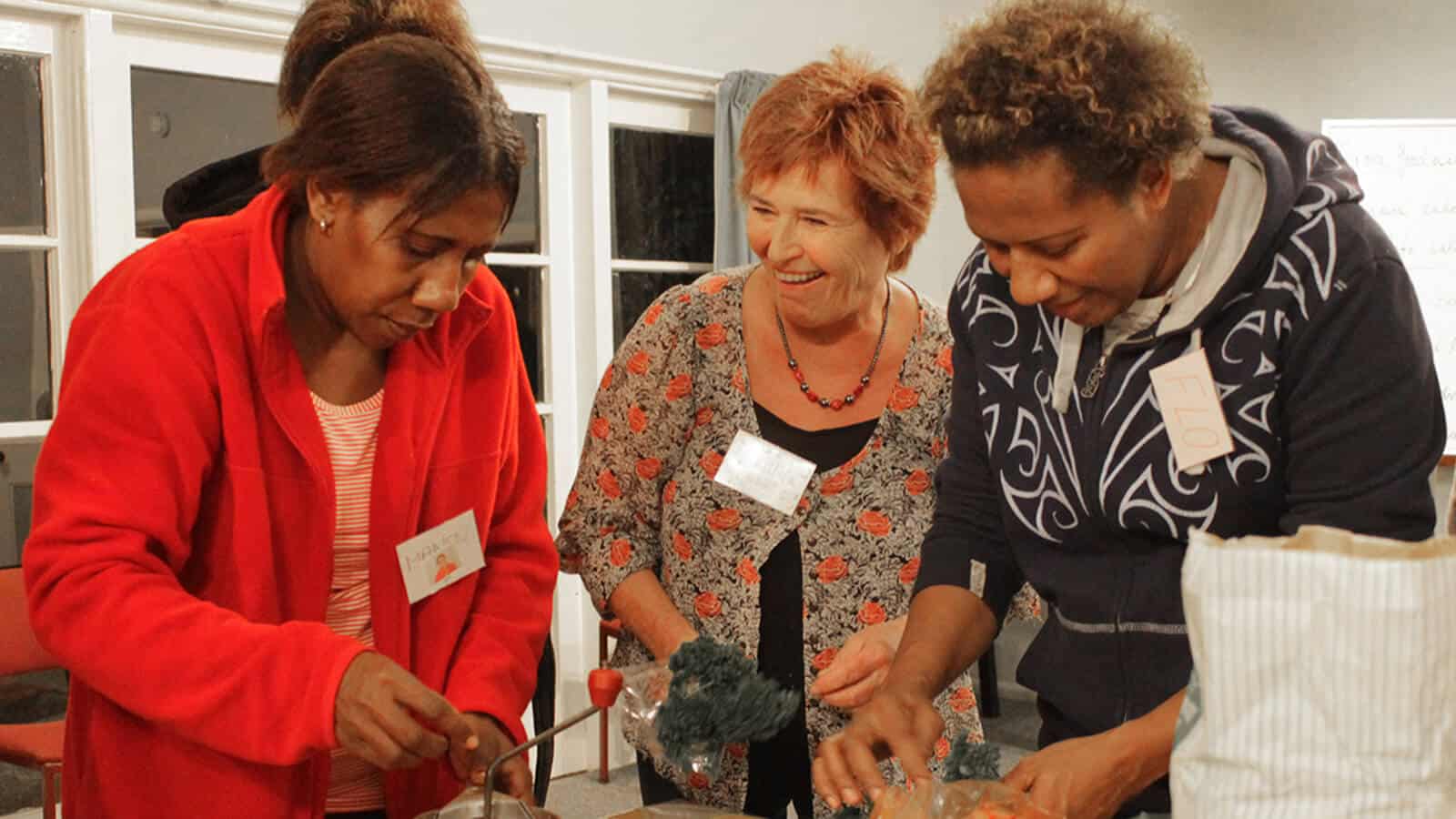 “It is a very sensitive topic,” says Lough, “so you have to do it gently, but you can be specific, and get the message across without offending people. Even with a mixed group you can do it without embarrassing people.”

While the Vakameasina education programme has literacy and numeracy at its core, the range of topics offered has expanded since inception, largely due to asking the students what it is they would like to learn.

“It is not easy for them. They are separated from their families, and living in a very different environment and culture.”

At the Arohanui Centre, Coral Gardiner is instructing how to install and hook up a solar panel, at the request of her students.

And as Cliffson Willie Kwai from Vanuatu explains: “Many people don’t have electricity back home so this is very useful.” He first learned solar technology last year and has since installed a panel at his house on the island of Ambae, “for lighting and charging the phone.”

Cliff Kwai is most interested in courses with a practical application. He has learned how to set out house foundations using a hose filled with water as a level, and how to maintain small engines – generator, lawn mower, chainsaw.

And he says: “We learn how to convert a grass cutter to an outboard motor by putting a propellor on the end. That was very useful. And we learn how to use a bicycle to make power by attaching an alternator to charge a battery.”

Cliff speaks English well, “because I joined a cruise ship when I was 17 and learned on the boat.” But he says: “I asked my friends what they wanted more of [from Vakameasina] and they say, we want more English training.” And he adds, ‘Some people say two-hour (classes) not long enough, and every time tutor ask at end of course, people say, we want more.”

Liz Maddock attests to the enthusiasm for learning expressed by the RSE workers when she conducts end-of-class evaluations, and she says “a lot of students say how surprised they are at how easy it was to learn.” 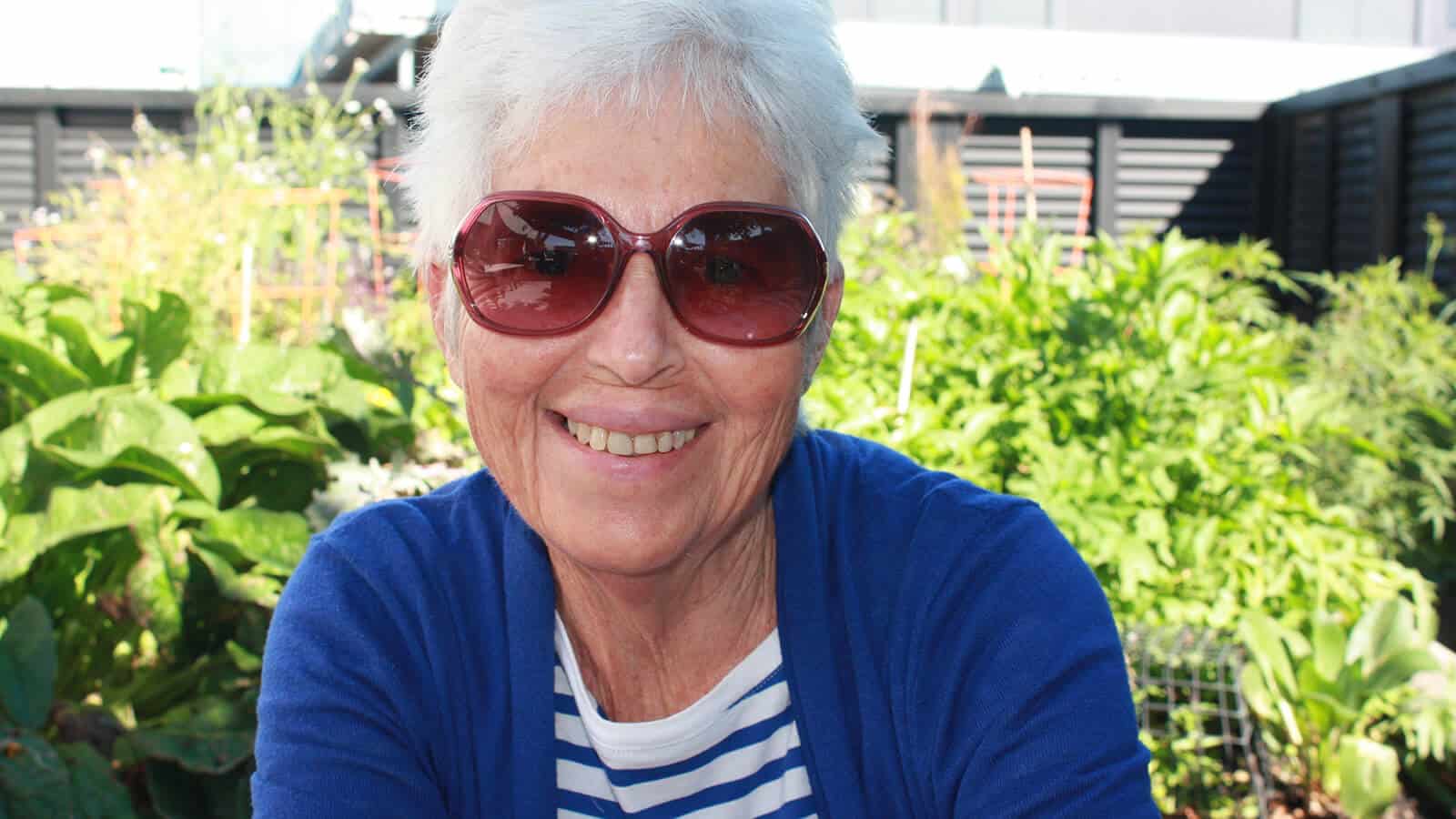 Cliff Kwai attributes his attitude to learning to his father, a retired teacher, who told him: “You learn all your life until you die, because everything is always changing, especially with all the new technology.”

He recognises the value of education for his own children, and as well as saving for the their future schooling, he is currently paying for his sons to learn English and French.

In preparation for the next week’s class on cooking, Coral asks her students what they’d like to learn. Cookies, says a woman. Banana cake, says another, and a man wants to know how to make chicken curry. Other requests are for steamed vegetables, salads, and Cliff Kwai asks for potato gratin.

Coral Gardiner is one of the mainstays of Vakameasina, and along with other tutors Trish Cummins, Mathilda Schorer, Hilary Heath-Caldwell, Katherine Searancke, and Yavanna Redgrave, deliver invaluable instruction and resources to RSE workers.

The impact of their teaching was observed by Gill Lough when she visited Vanuatu and “saw solar panels, and a village installing new water systems, and one had opened a new clinic” … all with knowledge from the Vakameasina programme. 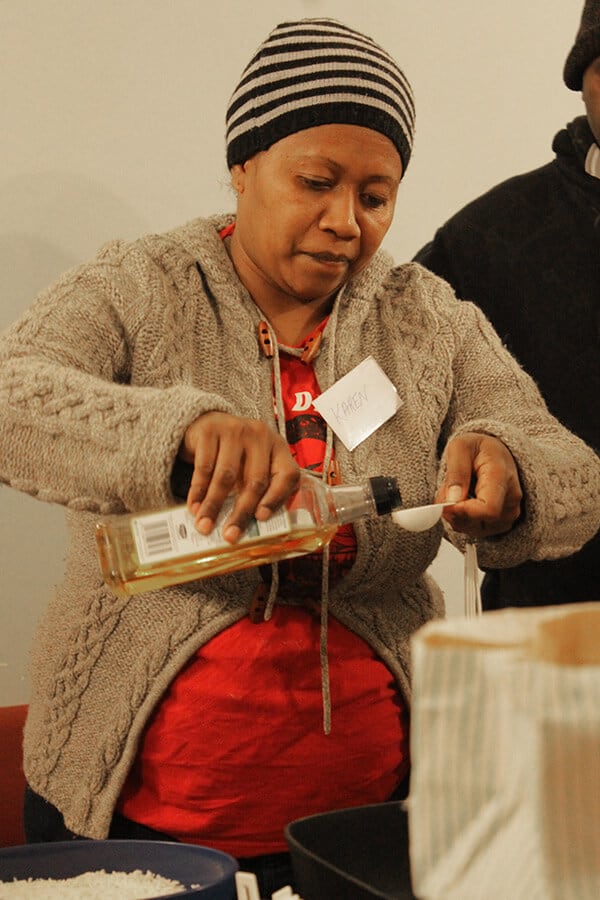 The Vakameasina
education programme is offered free to participants.

Cliff Kwai is building a new house for his family which includes “a room for my parents, a room for my brother, and for my own family.” And says Cliff: “The certificate we get at the end of the course, especially from the leadership classes, has meant some people have got jobs with the government. They’ve learned how to run meetings and organise people.”

And as Gill Lough observed: “Some of what they [RSE workers] learn in New Zealand is unexpected.”

In one village she met a couple who “were doing things together; taking up projects and running with them.” The woman accompanying Lough said she had noticed how men took greater interest in family life on returning from New Zealand, and some of the children said it was good seeing their dads do work he hadn’t done before.

The Vakameasina education programme is offered free to participants, who are also subsidised with travel expenses, and often supplied with a meal. It is an invaluable resource for the RSE workers, who play such a vital role in the Hawke’s Bay horticulture industry, and a constructive way of giving thanks for their contribution.