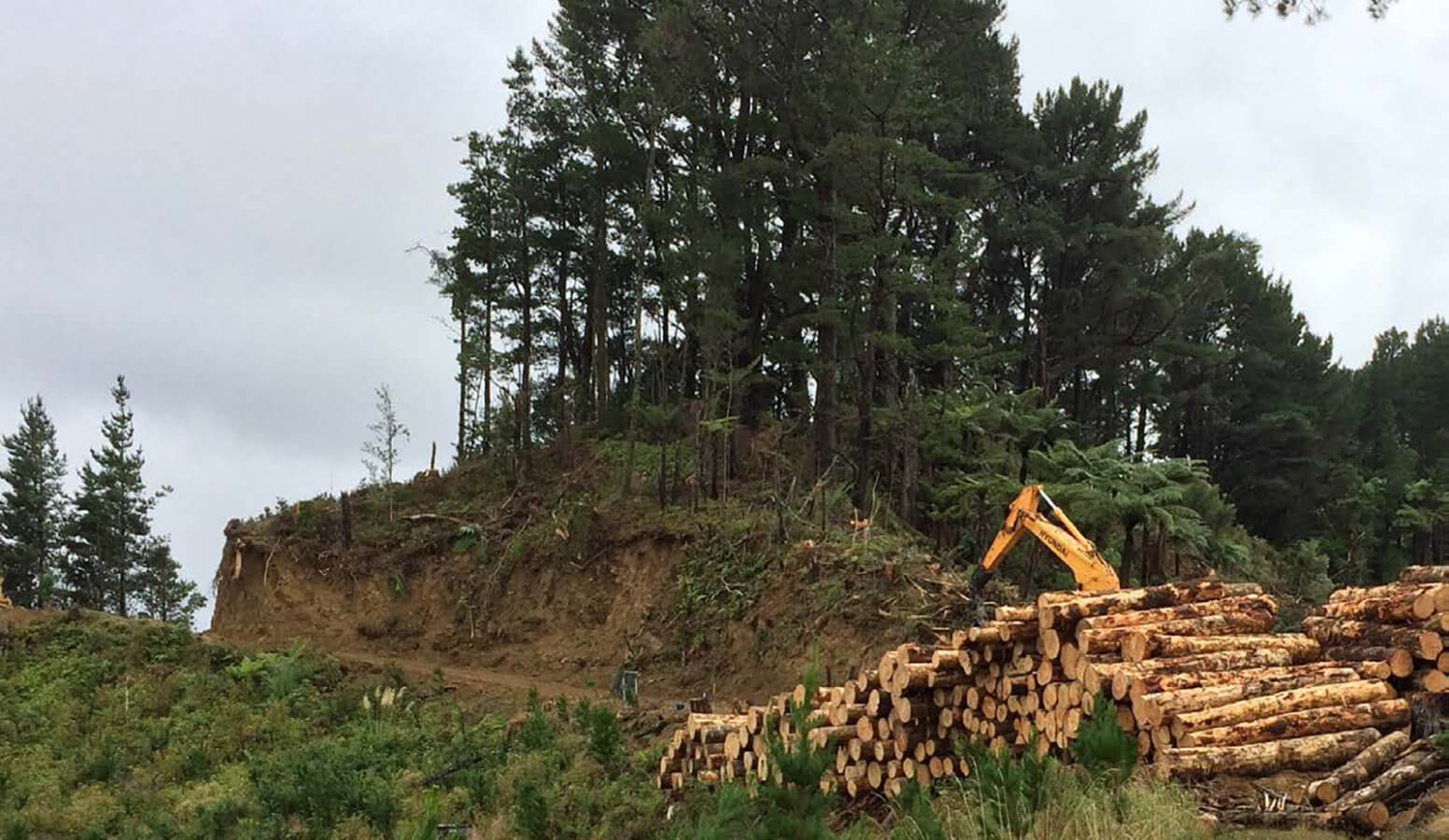 On a cold southerly interlude to our hot summer I walked along the route of the old Gisborne coast road north of Mahanga.

It is spectacularly beautiful, climbing up 500 metres around the seaward edge of the Wharerata Ranges, before rejoining SH2 on its northern descent. Low clouds snagged on the hill tops and misty rain drifted in the wind. The grassy track looped in and out of the folds, a larger echo of the countless contour lines of sheep tracks engraved on the steep slopes that tumble to the sea. The horizon rose far out in the distance as the ocean fell away below me.

Walking is a rhythmic immersion in the moods of place – of weather and land. My reverie was broken when I came around a corner to encounter a pile of logs completely blocking the track. Freshly peeled, their greasy rounds offered a challenging and hazardous obstacle to clamber over. Branding on the logs showed this to be the work of Pacific Forest Products.

On the other side, past a sea of churned up mud and parked machinery, a site safety sign warned of workplace hazards and forbade entry. Yet I was on a public right of way! This is not legal – the regional council has a duty to keep it open – but it is indicative of attitudes to rights of way in New Zealand.

European countries are laced with countless old ways, dating back hundreds and even thousands of years. They are part of the rich tapestry of history, remnants of very different lives, from when walking was the only transport for most.

The English language retains many old names for these routes: trods, leys, drongs, sarns, snickets, bostles, carneys, herepaths. Many were created by the accumulated passage of people over common land. But various Land Enclosure Acts between 1750 and 1820 stopped all that. Wealthy landowners who made up Parliament passed laws saying that if someone fenced off land then they would own it. Of course only they could afford to do this. George Monbiot in the Guardian considers that the enclosures could be said to have been acts of greed and plunder that foreshadowed our environmental crisis. They certainly helped the industrial revolution with all the newly landless peasants looking for work in the cities.

This wrong was put right recently in separate acts in England and Scotland that finally enshrined the right to roam in law. People can now use open land for recreational purposes as long as they do not do any damage. In Scandinavia it has always been thus, with no enclosure act taking away medieval roaming customs. The law accepts the fact that the land has been here much longer than we have, and that those who own it only do so temporarily – they are really no more than custodians who will hand it on to future generations.

In New Zealand it is a different story, despite the fact that the country used to be covered with extensive Māori footpaths. Captain Cook commented on how fast news of his movements travelled. Richard Cruise wrote in 1820 that “there was scarcely a part of the island (NZ) visited by our people, however distant, to which one or more pathways did not lead.” And in her book on Te Rauparaha, Patricia Burns wrote that “Māori had learned to walk hundreds of kilometres without fatigue, living off the land, and guided by the stars and their extensive knowledge of physical landmarks.”

But unlike Europe, these trails were never given any legal status. Our law started with British colonialism when surveyors, often on the other side of the world, drew up paper roads and title blocks. These wider public roads used by carts, and later by vehicles, supplanted the old ways whose usage died out. We are like Britain at the time of the Enclosures Act. History of Māori movements has been ignored and effectively eradicated.

I think it is about time that early Māori paths are given the same recognition as the old bridleways and herepaths of Britain. If it works there with so many more ramblers, surely it can work here? It is true that we have one of the largest conservation estates; it covers nearly 30% of the country. But all the wild, remote and mostly empty hill stations are legally off limits.

In the 2000s Jim Sutton and the Labour Government attempted to introduce the right of linear access (i.e., trails only). But it was stopped by a scurrilous campaign of misinformation by Federated Farmers who claimed that Sutton was proposing area access (roaming, which is legal in the UK). A watered down version, called the Walking Access Act (WAC), came into law in 2008, which trumpets our freedom to explore our land, but simply reiterates public access to existing rights of way. So New Zealand is still way behind Europe.

In general I have found that local farmers are generous in allowing me to walk on their land when I ask them. But I am concerned about the increasing amount of farmland owned by corporations, especially the overseas ones, who are unlikely to show such generosity. For this reason alone, Sutton’s proposed legislation needs to be resuscitated and Federated Farmers put on a leash.

No one should own the earth, it is what gives everything life. It was here long before us and it will be here long after us. It is the spirit which invigorates all of us, and it feeds us with food, clean air and fresh water. Ultimately we are all responsible for the earth. In addition, the physical and spiritual well-being of so many people, me included, depends on access to wilderness and untouched nature.

Of course I would never walk through people’s gardens or planted fields but I do believe I should have the right to walk wherever I like elsewhere, as long as I respect those who use the land and cause no damage to crops or animals.

Like countless billions of other life-forms, we are merely temporary residents. It was man, not a sky-dwelling deity, who wrote the words in the bible that say we have ‘dominion’ over everything on this earth. We do not, nor do landowners or logging companies.

All routes covered by the WAC are mapped out here: http://wams.org.nz/ wams_desktop/index.aspx. You have the right to walk on these trails, though I would still recommend contacting the landowner or farmer first out of courtesy.

For further reading look up ‘Foot-tracks of New Zealand’ by Pete McDonald, which is available online, and is where my quotes come from. 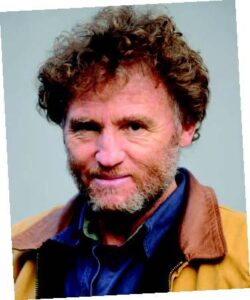