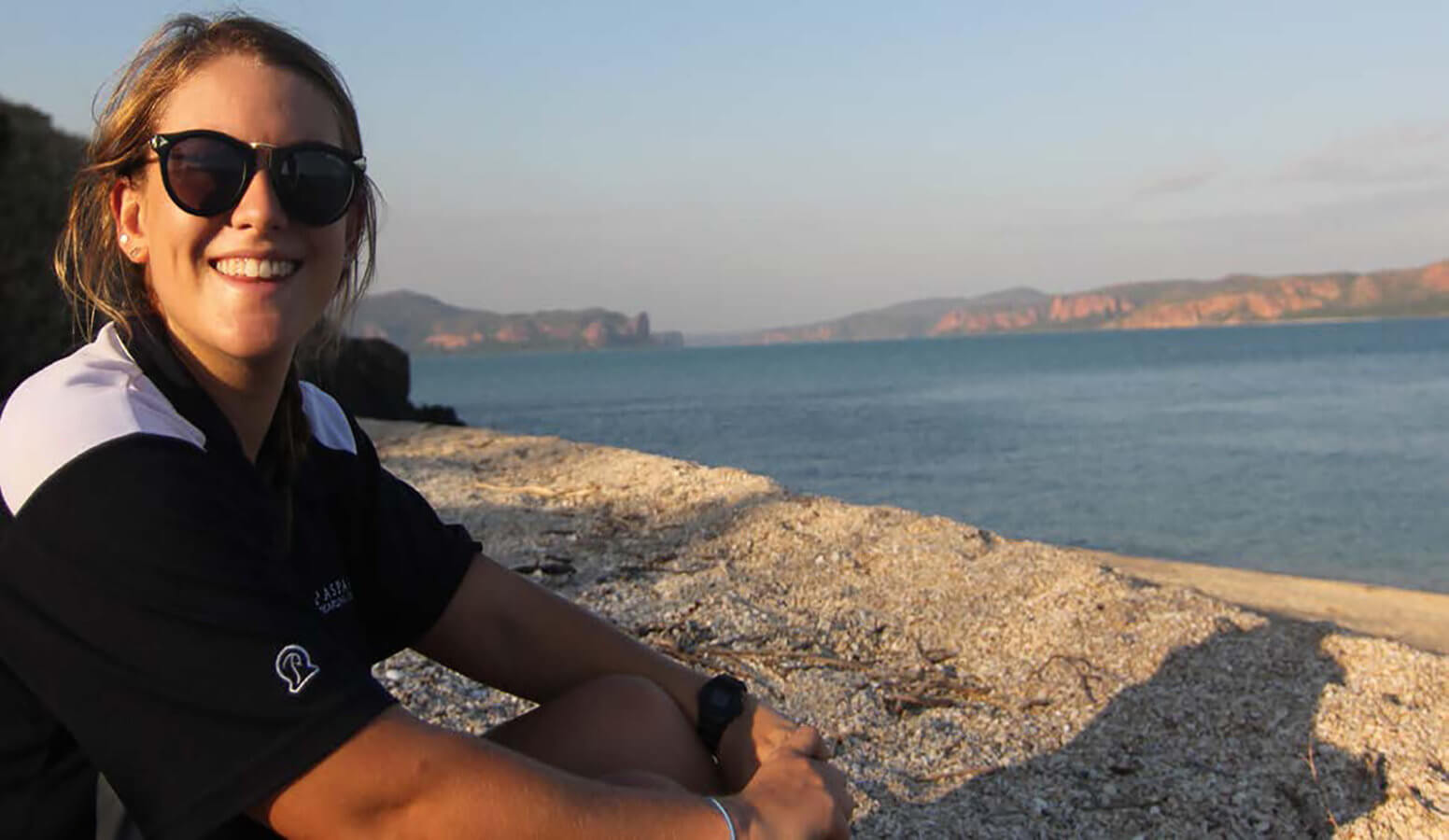 To Darwin To Pearl

I was on a small boat, in the middle of a fairly rough day on the Timor Sea; with three men I had only met that morning. I was as far from home as anyone could get these days: reception was a myth and we couldn’t see land. As we went about our laborious work, the small talk drifted to our homelands.

“I’m from Wairoa, originally”, said one.

“I’m from Porangahau”, said the other.

Darwin is similar in population size (146,245) to Hawke’s Bay. But hugging the equator, the everyday heat of Darwin melts Hawke’s Bay’s most scorching summer day faster than an ice cream sandwich on a BBQ. The Territory’s dry-season droughts make our summer of ‘97/98 look juicy. Most noticeable of all, Darwin has humidity like Hawke’s Bay has wine. It’s everywhere; you can bottle it.

Darwin is the gateway city to some of Australia’s most beautiful places, such as the UNESCO World Heritage Kakadu National Park and the breathtakingly remote Kimberley region (Australia’s version of the Marlborough Sounds: hot, isolated and full of crocodiles, but also extravagantly beautiful). Many backpackers flock to this far-flung city for work and adventure. Heavily-accented Europeans run the bars, short Swedes run the roadwork signs and nightmare Scotsmen run around drinking everyone under the table.

It’s also home to a handful of Hawke’s Bay ex-pats who have found themselves working in an industry not many people would have ever imagined.

The very day after graduating from university back in 2012, I found, through family-friend connections, a job as a deckhand for Paspaley Pearling Company; one of the major movers and shakers in the cultured pearl world. Working on a boat in the middle of the ocean was the last thing I ever expected to do, given my well-documented fear of the ocean – just ask my sailing-mad dad. However, when an adventure like that pops up – and you’re jobless after graduating – you’d be mad not to jump on in.

My role developed into Operations Room Supervisor on the MV Paspaley IV. My day began very early in the morning, setting up the UV filtration systems, managing fisheries compliance, managing assistant workers, keeping the technicians on schedule, maintaining equipment, adhering to hygiene/ cleaning and dealing with live organisms. Essentially I ensured everything within the operations room ran as smoothly as possible.

We were a crew of about 50 people. The boat operated on a well-developed system: we brought shell onboard every day, stored them in massive tanks overnight, then operated on them and put them back in the ocean the next day. It was a huge cycle that would go on for about two weeks at a time, sometimes more.

The Paspaley Pearling Company is a family run company. During the early 50’s, Nick Paspaley Senior and the Kuribayashi family, Japanese pioneers of pearling, battled with the Australian government to start culturing pearls in the Kimberley region. This relationship spawned, and to this very day, 50-plus years on, Japanese technicians still work hand in hand with Nick Paspaley Jr and his son James to create the most beautiful pearls in the world.

Naturally occurring, a pearl is the result of an oyster’s defence mechanism to a foreign object such as a parasite. In an attempt to protect itself, the oyster sheds fine particles, called nacre (nay-KHER), coating the invader. Nacre is a calcium carbonate concoction commonly known as mother-of-pearl. As time goes by, enough nacre is laid down to cover the parasite and a pearl is created.

So, what is a cultured pearl? By exploiting the oysters’ immune response, and coupling up with science, technology and surgeon-like precision, humans have been farming oysters and mass-producing perfect pearls.

The science behind the cultured pearl involves an operation that combines a shell bead (nuclei) and a piece of donor oyster tissue (saibo, SIGH-beau). Once placed inside another oyster’s gonads, saibo forms the womb-like pearl sac, which will nurture the materialising pearl by covering the nucleus in nacre.

After two years in the warm waters of the Kimberley region, these seeded oysters are harvested for their pearls. Depending on their pearl quality, the oysters are then re-seeded for another harvest. Using this transplant technology, pearl technicians have been successfully seeding oysters for almost a century.

Just as champagne can only be called so if it comes from Champagne, Paspaley South Sea pearls only come from the largest and rarest of oysters, the South Sea Pearl, Pinctada maxima. This oyster has the most beautiful nacre of any mollusc; key to creating the iridescent lustre that Paspaley pearls are famous for. These oysters are found in the warm waters off the Western Australia coast, with plentiful grounds found south of Broome, one of the original pearling towns. The Paspaley diving fleet collects thousands of wild shells each season, to be seeded by Paspaley’s team of Japanese technicians. 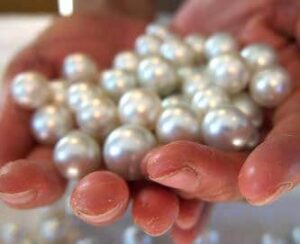 After explaining this intricate process of seeding pearl oysters, I’m often met with exclamations of “Oh, so they aren’t even real?” Richard McLean, pearling advisor and pearl room manager for Paspaley, has an answer for the dubious: “We may start the process…but from that moment onwards, the shell starts the process of creating a pearl. What quality, size and colour this pearl will be, we don’t know until the pearl is removed. Two years is a long time to wait for a crop not knowing what the result might be, so harvest time is a special time of year.”

I agree, after experiencing three harvests and seeing thousands upon thousands of pearls, awe and amazement did not fade. In fact, knowing exactly how the pearls were made and being part of the blood, sweat and tears of their creation, has made me appreciate cultured pearls even more.

Growing up snorkeling for paua off the coast of the family farm at Whangaehu Beach, south of Porangahau, Richard McLean heard through the grapevine that there was an Australian company that paid people to dive. So he packed up all his diving gear and landed in Broome. Fast-forward through eight seasons of diving, five years skippering, to operations manager, then farming operations manager and now to his current role, McLean recently celebrated 30 years with Paspaley Pearls. It’s been an interesting life for the Hawke’s Bay ex-pat who, over the decades, has helped a large number of his family and extended family work in the industry.

One such family member was his younger sister Jean, and her husband Richard Kibblewhite. In the late ‘80s, the couple joined McLean in Broome, Richard went pearl diving and Jean alternated between working in the showroom on land, and working at sea.

After four years in Broome working for Paspaley, they moved home to Porangahau for good. They put their skills to good use, tapping into the newly-developed paua quota management system, eventually expanding into crayfish and wet fish. Nowadays, they own the fishing company Splashzone Ltd. They catch crayfish, paua and inshore fish species, for both export and the local market. Jean credits the amazing time the couple spent working with her brother and the Paspaley family for inspiring their interest in the fishing business.

Our summer months coincide with the off-season for Paspaley pearl divers, and many of the New Zealand divers come back and catch Splashzone’s paua quota. One of these returning divers is Jean and Richard’s eldest son, Sam Kibblewhite. Through his uncle, Richard McLean, Sam got work and is now onto his third season diving for Paspaley. Like his uncle and parents, he loves it and plans to keep doing it for some time. I met Sam from Porangahau on that fairly rough day on the Timor Sea, when the ships we worked on did collaborative work.

And the benefits of the family’s continuing connection with the pearling world don’t stop there. Another brother of Jean’s, Hamish, is a keen horse polo player and enjoys a game when he’s back in Hawke’s Bay from working in China. It was during a visit to his brother Richard in Broome that he attended the annual Cable Beach Polo, of which Paspaley is a major sponsor. Hamish thought that a similar event would go down a treat in his hometown of Porangahau, with its long, sandy beaches.

With the support and influence of family and friends, including Richard McLean and Marilynne Paspaley (sister of Nick Paspaley Jr), Porangahau Beach Polo celebrated its third tournament last year. Held just after Christmas on Te Paerahi Beach, the event attracts players and guests from all over the world – England, Mongolia, China, Papua New Guinea, Malaysia, Argentina, Australia, and of course New Zealand. The Porangahau Beach Polo committee is made up of local polo players, polo trainers and members of the McLean family. Check out their website (porangahaubeachpolo.wix.com/ porangahaubeachpolo) for more information.

Although I have now said goodbye to Darwin and Paspaley, I am still enthralled with pearls and the rich history they leave behind. I’m not the only Hawke’s Bay local to head over to the pearling world, nor am I the last. My younger brother swears he’s going to work with them once he’s finished university – just like I did.