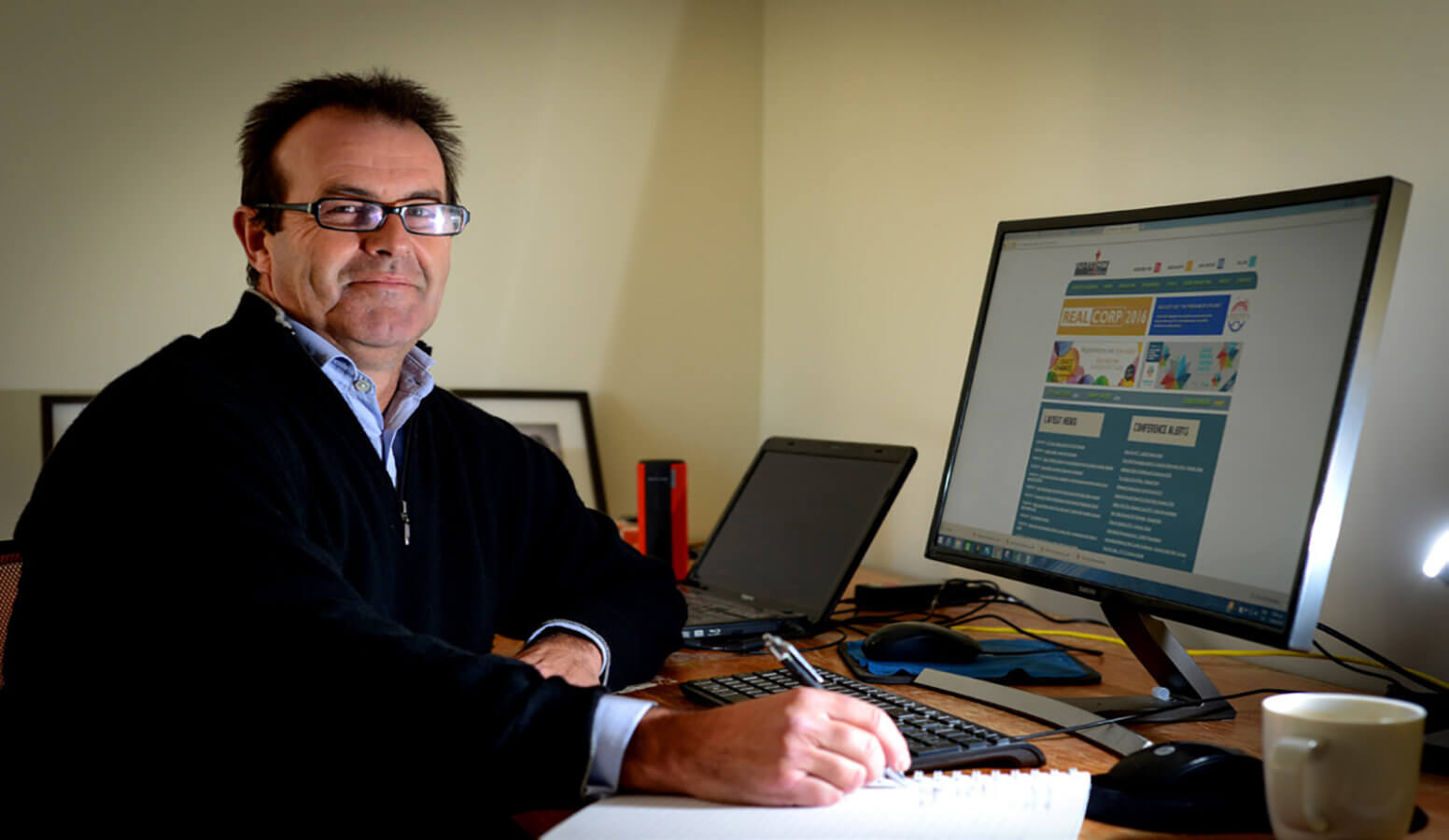 In late ‘90s London, Jerry Flay’s fl edgling online magazine business was bought out. It didn’t take long for him to regret his decision, as he realised the new owners were mostly interested in cutting costs. So he made the move from London to Havelock North with his wife.

Still fl ush from the sale of his start-up, he didn’t feel an immediate need to work, and instead set about looking for local opportunities. There wasn’t one, so he took a blank piece of paper and started exploring ideas.

Eventually he settled on creating a website focused on urban development issues. Drawing on his publishing experience, he knew several of the major players, and began to approach them. The United Nations expressed interest and UN-Habitat, the global organisation’s agency for human settlements and sustainable urban development, was eager to endorse the new venture.

Like a lot of internet ventures, it sounds glamorous, but it wasn’t. Jerry started with the excruciating task of compiling a list of 25,000 city websites from around the world, and fi nding out the contact details of the people in each organisation who would be interested in the website’s content. And the content mostly consisted of events and education.

At this time many universities worldwide were developing postgraduate qualifi cations in urban development. As city councils and universities got on board with the idea, the site’s database of events rapidly grew. For example, there are at least 500 conferences each year with urban development as their theme, and Urbanicity’s event calendar is the best and most comprehensive in the world.

The business model is pretty simple. Like a lot of content-driven websites, Urbanicity relies on advertising revenue. In the urban development community, this mostly comes from conferences, and from universities advertising courses. Jeremy and his staff fi nd out about upcoming events and approach them with off ers of publicity. Their sophisticated marketing software has very detailed profi les of everyone in their database, so they can provide their advertisers with extremely well-tailored promotional campaigns, specifi c to language, region, age, and socio-economic factors.

UN-Habitat is still involved in the website and it has been crucial to the success of the business. “It was crucial in establishing credibility early on,” says Jeremy. There is also a hard core of 16 or 17 major advertisers who have supported the site from the start.

The success of the site means that Jeremy does not need to be involved in it fulltime any more. But it hasn’t been easy. “You need to work hard – and focus. There must be a gap in the market that no-one’s fi lling – and you need to do the work. The intensity, stress, and loneliness of starting your business mean that most people simply aren’t cut out for it.” Jeremy says building the database at the start was especially hard, but he knew he needed to do it for the business to work. And he found out that the two most important words for any start-up business are cash fl ow.

The internet has enabled Jerry to build up the world’s biggest urban development community from his home offi ce in Havelock North. In fact, Urbanicity would be completely impossible without the internet, and Jerry can’t imagine what he would be doing if the internet didn’t exist. “It’s so easy to forget how new it all is and how quickly it has become the most important invention since … fi re, I suppose.”

So is Jerry an early adopter of technology? Far from it. Despite his overwhelming reliance on it, Jerry is suspicious of new technology: “I like to have a think about things fi rst. I’m not into technology for its own sake. It’s purely a means to an end.” He would much rather play golf than play with the latest iPhone.

Since he started Urbanicity, the biggest change that Jerry has seen is the ease with which small businesses can now do their own digital marketing. It’s never been easier for a conference organiser to send an email newsletter, for example, using one of Mailchimp’s off -the-shelf templates. But this can be a positive and a negative for businesses. It’s one thing to have the technology available to send a mass email, but according to Jerry, “people need to learn the value of an audience. There is a huge disconnect between what a business wants to say – and what their audience wants to hear about.”

Generally speaking, New Zealand businesses are not prepared to spend enough money on ensuring their digital marketing is eff ective. “Everything about an email, from the name of the sender, to the subject line, to the design and the copy, has to be right. You’ve only got a few seconds before they delete it.”

But at least every email gets seen by its recipient, unlike most social media content. A self-described ‘email warrior’, Jerry is not a great believer in social media for business. He thinks only 2 or 3% of businesses who use social media are getting any benefi t from it. “Most people don’t comment on social media. They’re too scared to, in front of all those people. But they are quite happy to reply to an email. Even if they delete your email, they are forced to make a choice. They have to consciously decide to delete it. With social media, they are not compelled to do anything.”

A diligent student of online business, Jerry’s most admired online company is Amazon, “because they were the fi rst e-commerce site to realise that the transaction did not end until the buyer received the goods and was happy with them. Everyone else just assumed the transaction was over when the customer entered their credit card details.”

Paying close attention to his customers and obsessing over their satisfaction for 15 years has enabled Jerry to get to the point where golf can occupy more of his time, “primarily because work is early morning and late night, due to the North American and European markets being 85% of our revenue.”

Jerry seems to have the elusive work-life balance sorted: “In ten years time I want to be doing exactly what I’m doing now. But richer. And playing more golf.”