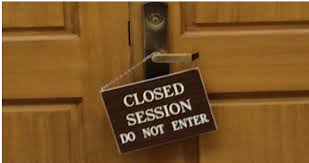 Win or lose, I will continue to fight against council secrecy. After all, before I was a councillor, I managed — with the help of dozens of supporting submissions from BayBuzz readers like you — to get the HBRC meetings on videotape. There’s hope.

Kudos to Hawke’s Bay Today for taking up the cause of council secrecy.

Council ‘secrecy’ can take many forms – public-excluded meetings, ‘workshops’, delegation of key decisions to staff (like awarding of consents, including water bottling) and council-controlled organisations (as with the dam), not requiring public notification for sensitive consents, and simply withholding information.

Of course, confidentiality is sometimes justified, such as where staff or director appointments or salaries are under discussion. Or where competing service contracts are being reviewed. But these should be narrow exceptions … not the rule.

For public-excluded meetings, the most frequently given ‘justification’ is commercial sensitivity. Councils prefer to award grants to water bottling plants and other businesses in secret. If these enterprises were so deserving of ratepayer subsidies, why wouldn’t councils proudly award them publicly … to take proper credit?!

Workshops are informal meetings where no formal votes are taken and no official records kept. However, ratepayers would be quite naïve to assume that ‘decisions’ are not made. Workshops are where councillors discuss the nitty gritty of controversial policies and council failures. Matters deemed too ‘difficult’ or ‘sensitive’ for the public to witness or understand.

The practise of secrecy is well-honed at the Regional Council, as handling of the proposed dam confirms.

For example, HBRIC only gave councillors copies of the ‘Foundation Agreement’ used to commit farmers to water purchases from the dam after I noted, in a public meeting, I had already been given one by a CHB farmer.

Even today, over $20 million into the project, I as a councillor have no document that breaks out the costs of the dam. Why not? ‘Commercially sensitive’, even though the contract is already awarded. Are you protected from cost overruns or add-ons? I have nothing to convince you one way or the other.

To read a redacted version of the contract, I must sign a special confidentiality agreement, surrender my cell phone (no photos allowed), and sit in a monitored room. After I recently spent two hours reviewing the contract, my notes were confiscated.

Months ago I raised concerns about whether HBRIC was meeting a key consent condition ordered by the Board of Inquiry. This condition – effective in June 2015 – requires that an independent panel review all aspects of further design and construction plans for the dam. That panel, which might instruct changes, has never been constituted, calling into question how there can be a construction contract today whose price is ‘guaranteed’, a condition required for the project to receive $80 million.

A legal opinion was requested on this. One public reference to it, probably accidental, suggested that there might indeed be a problem. But only at the HBRC meeting of 28 September did councillors receive the opinion – in public-excluded session, of course. So, as with the contract itself, I cannot tell you whether my concerns were confirmed or not.

Early in the term, councillors Beaven, Barker, Graham and myself boycotted a secret dam briefing in protest. Dam discussions over the past three years have been a swirl of public meetings and documents, public-excluded sessions, confidential documents, and private workshops.

Today it’s impossible to recall what one has heard or seen in a public versus private context. That has a chilling effect on what a councillor can comfortably discuss with a constituent – unless the constituent turns out to know more than the councillor, because they’ve already heard some nugget ‘on the street’ … like who the prospective dam investor is (which I cannot confirm as a councillor).

I’ve heard more detail from outsiders about Havelock’s bores than I received in a hush-hush councillor briefing from HBRC lawyers (for which I had to sign yet another confidentiality agreement).

The culture of secrecy must end.

Secrecy breeds poor quality decision-making, because there is too little opportunity for independent challenge to the data, assumptions and perspective of the insiders controlling the process. Group think prevails and staff dominate councillors. And of course secrecy allows elected officials (and senior managers) to avoid accountability. Together, these defects undermine public trust in council decision-making, which in turns infects all relationships.

Sunlight is the best disinfectant.

Apart from minimizing use of secret meetings and information in the first place, a responsibility I embrace as a councillor, each council should publish an annual ‘Public Disclosure Report’.

The report, for the previous year, should document in understandable detail all occasions of public-excluded meetings and workshops, and it should list/link to all previously withheld minutes and documents that have subsequently been ‘de-classified’ and released to the public.

Even if certain matters are legitimately discussed in secret, accountability still demands that outcomes – and the information and votes behind them – be made public once the initial justification for secrecy has evaporated.