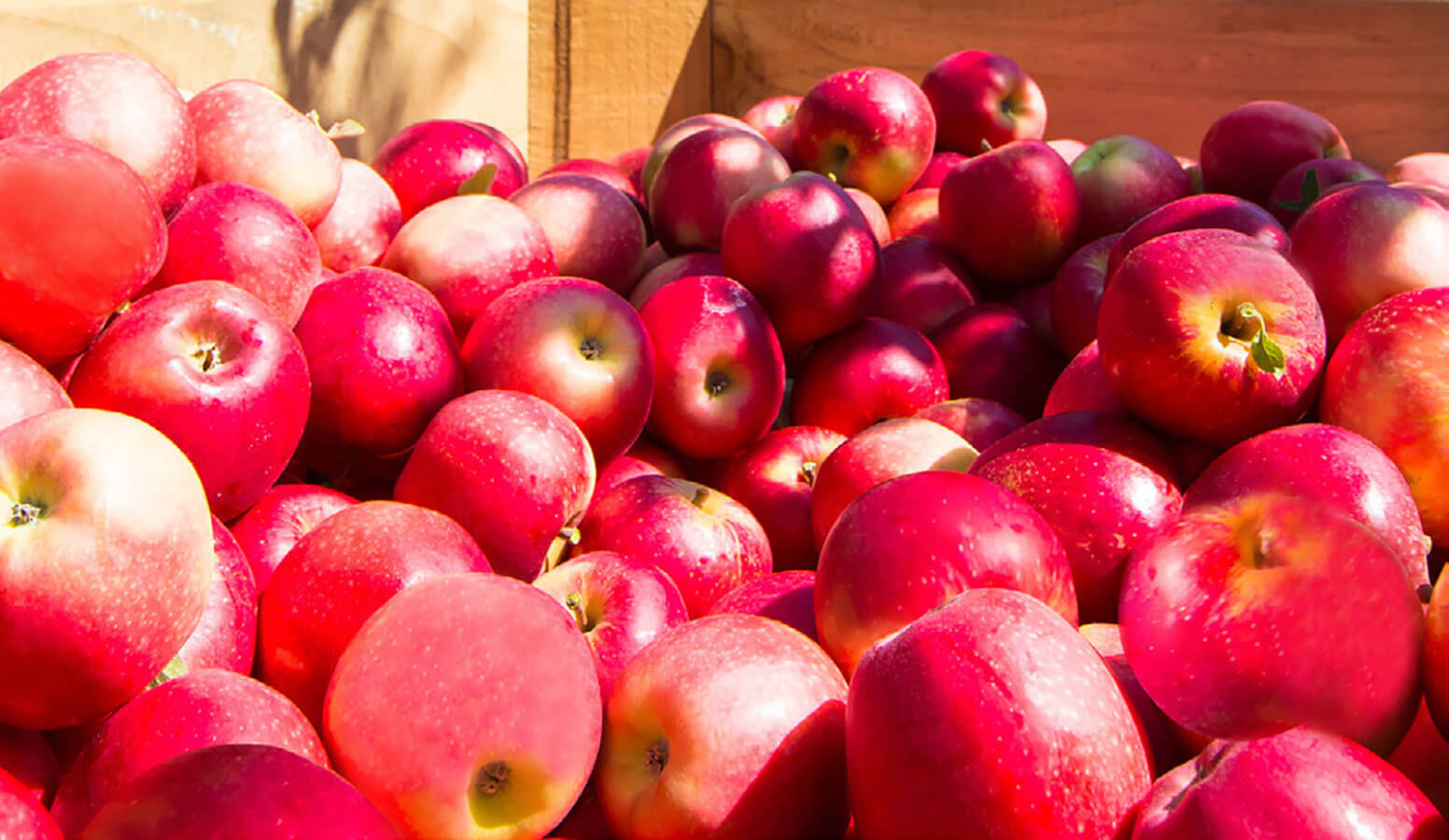 The borders of our Hawke’s Bay cities are dominated by apple trees. The seasons are marked by the arrival of blossom, by the darkening of leaves, by the red bursts of fruit, by the pickers hard at work. Then in May our rural arterials begin to smell of cider as the last of the fruit lies on the ground, slowly turning to mulch.

In the humble apple Hawke’s Bay has the raw ingredient for increased exports, new careers and more jobs, artisan and innovative products, and potentially the cure for cancer. Currently we witness the apple growing, then it disappears overseas, job done. Instead we should be exploring its full potential, growing our knowledge of it, celebrating it, experimenting with it, tasting more of it than just our daily Jazz.

What is an apple?
For starters, it’s mostly water with a bit of sugar. But it’s low-GI, high in antioxidants, potassium and vitamin C, and has satiating benefits, which means it can help with weight-loss. Multiple studies have found a link between a reduction in Type-2 diabetes and apple consumption, while other tests link apples to a lowering of cholesterol.

Each apple can produce up to half a cup of juice, which can be diluted, denatured, concentrated, fermented or distilled. The flesh can be tinned, pulped or dehydrated. The skin is edible. And, biologically, apples have 57,000 genes, twice as many as humans, which makes for a vast and ever-increasing range of varieties.

On top of it all New Zealand reigns supreme, with 66% of New Zealand apples being grown in Hawke’s Bay. But even picking the first-grade fruit and getting it to market is a strain on our workforce and infrastructure; doing anything brave with second-grade fruit, is outside our current abilities.

What does this mean for jobs? This season Hawke’s Bay was 817 people short. In 2020 we will need 2,500 more people than we did this year. Some of those will be covered by our Recognised Seasonal Employer scheme.

But here are also roles for permanent staff. In 2020 our region will need 2,300 people in permanent ‘apple’ careers, about 700 more than we presently have.

“The problem is that we don’t have anyone with the right skills who isn’t already working in the industry,” says Erin Simpson, capability development manager at Pipfruit NZ.

To meet the future demands of apple markets, we need people now who are stepping into a tertiary pathway that leads them to pipfruit. Future projections are not simply crystal-ball gazing. There is confidence in the apple industry as markets solidify and growers meet the demands of both European and Asian markets with their differing needs and expectations.

“We’re not completely reliant on one market,” says Erin. “Our access to markets is good. We’re not likely to fall to the boom/ bust cycles of the past.”

It’s widely accepted that New Zealand is the best place to grow apples with its long- growing season and its oceanic environment. The quality is high and for many consumers New Zealand apples are their fi rst choice – we’re the only exporter to Australia and Japan. But currently we produce less than 0.5% of the world’s apples.

Keeping up with demand and building a strong sustainable industry are our big challenges.

Erin Simpson and Pipfruit business manager Gary Jones are both working on solutions. Much of it is in training and employment. Working with EIT, Massey, Ngāti Kahungunu, MSD, councils and industry, Pipfruit is reshaping the perception and the reality of a career in apples. To ensure a strong foundation for this growing industry all these agencies need to make sure future workers – whether they’re heading for roles in management or operations – see apples as a job with a decent salary, professional development, travel and career opportunities.

“We don’t have to make the jobs, they are here now, we just need people to be ready for full time work,” says Gary. “We don’t have the skills we need and it’s happening much faster than we thought it would.”

Last year four graduates came out of Massey with horticulture degrees. They all had industry jobs secured before they graduated; one went into apples.

Why we don’t dabble
The pressure on the apple work force is such that there’s not much resource left to worry about the apples that don’t make the grade, and therefore don’t get to market.

“Fresh apples are doing well,” says Yummy Apples boss Paul Paynter. “People are moving into FMCGs (fast moving consumer goods) like Rockit, where there’s branding and marketing as part of the off ering, but we are throwing away 20% of what we produce.”

In Hawke’s Bay, that’s four million boxes of apples a year. Fledgling commensalistic businesses that use wastage or by-product, therefore squeezing as much return as possible out of our apples, don’t yet exist. There is unmet potential for apples to be maximised as value-added commodities.

“We need second-tier process products, differentiated products,” says Paul, who believes there’s plenty of room for both streams of the economy to benefit: “If you want to make the most out of any industry you must have divergent strategies.”

Paul uses milk as an illustration of what can happen in a primary industry.

Fonterra is in the business of mass-market consumer products, including exports. But working alongside the big guns of the industry are the artisan cheese makers. Paul feels that’s what the apple industry is lacking: the little guys crafting niche, high-end products, pouring love into what they make, innovating faster than the Fonterras of the world can move.

Currently the last of the season’s apples go on to be processed predominantly as apple juice concentrate (AJC). Growers take about $8 a bin for the unused, undesirable apples. AJC is an international commodity, but not a particularly valuable one.

There’s an irony for us in the word ‘windfall’. It describes the apples lost to any zephyr that whips through, on the ground they lie. But it also means a large amount of money, won or gifted, either way, unexpectedly. With smarts and good timing, our windfall could come if we could just work out what to do with our windfall. 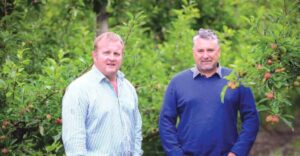 Waste products
One answer could be biofuels. Research out of India and the US has looked at how to convert the sugars in fruit waste to a substance called DMF that has 40% more energy density than ethanol.

Another area of R&D is shelf-stable non-pasteurised apple juice targeted at markets in Asia.

“There’s a lot of mistrust of food products in Asia,” says Paul. “And New Zealand has this reputation as an idyllic wonderland. We can demand a premium, it’s the value of Brand NZ.”

The old saying – “An apple a day keeps the doctor away” – may have some truth in it. One particular NZ variety that’s getting treecroppers very excited is the heritage, disease-resistant Monty’s Surprise. Cancer research on 250 apple varieties has shown that Monty’s Surprise has the greatest effectiveness at inhibiting cancer cell growth.

Also in the health space, the medicinal value of apple cider vinegar is being investigated. Drums of the stuff are already being sold to the equestrian industry.

One of the hurdles is ‘proof and claim’ constraints. Depending on the market it can be difficult to assert the health benefits of a particular product. But other products – like mānuka honey – have found ways, and language, to get around the problem, drawing correlation but not causation.

Even simply rethinking the apple as a credible item in the Asian festival and gifting market lifts the value. A piece of fruit, selected for shape and colour, and individually wrapped can sell for ten times what a similar piece in a generic box goes for.

“There are still a lot of growers who don’t understand the market beyond the farm gate,” says Paul. Shifting the thinking from the traditional to the potential is still a sticking point.

Paul believes the greatest developments will come from the edges of the industry, rather than from the big players.

“Innovation never comes from the mainstream. It comes from the weirdos, the hippies and the tinkerers. It’s the eccentrics who make change with their fringe ideas.”

Edge thinking
One of those enthusiastic growers is Claire Buckner, who grows apples for export and the domestic market. Almost half the crop on her biodynamic orchard in Hastings will go to the organic Royal Gala market overseas, half will stay here in New Zealand, supplying Royal Gala, Braeburn and Pacifi c Rose to Wellington and Auckland.

“So much of our produce goes to export that it has to be of a high standard. Fruit that doesn’t make the grade doesn’t go to market so we have a massive amount of second-grade fruit, way more than the supermarkets can sell,” says Claire, who explains that growers often don’t see those apples again as they are sold for processing.

“None of us produces fruit to be processed – we can’t afford to,” says Claire. “Apples are expensive to grow and maintain and we need the best price for them. The amount of fruit you see lying on the ground is indicative of how low value that second-grade is.”

Claire believes there’s space for people to dabble in apple products. “People who want to could hit up growers and easily get hold of that second-grade fruit cheaply.” Apples of this quality can sell for as little as 20 cents a kilo.

“There’s definitely a market there in apple syrups, apple cider vinegars, jellies,” believes Claire, who says the Dutch have a bigger culture around processed apple than we do.

Claire believes change in consumption should start with individuals, experimenting with new ideas or reconnecting with old ones. Kiwiana banana cake should be rethought as apple cake; baked apples should be re-embraced as an alternative to stodgy pud.

“We could have a real apple culture, celebrating the varied shapes and sizes,” says Claire. A skerrick of Claire’s orchard is dedicated to heirloom varieties including Monty’s Surprise, as well as Liberty, Bramley and Belle du Boskoop.

“There’s been a move to have sweeter and sweeter apples,” she says, “and we expect this crisp, large, juicy fruit,” which means we miss out on some of the flavour profiles, health benefits and potential of other varieties.

“In the past we’d pick our own, peel them, eat apples that might have blemishes but amazing flavour,” says Claire. “Now there’s not enough of a collective Kiwi feeling for that kind of thing, what we expect an apple to be has had a dramatic shift.”

Experimenting with a wider range of varieties starts with visiting farmers’ markets and talking to growers. From there, apple fritters, apple butter, apple sauce, apple chutney, apple sauerkraut and apple galette are all worth a try.

[Note: There’s a lovely video available to view on the Monty’s Surprise at http://bit. ly/2g3FbzS]

Cutting chemicals
The apple industry has a proud reputation for reforming pest control and the use of chemicals. Ten years ago a tightening of regulations in the European market meant apple growers had to reduce use of sprays. European supermarkets only wanted fruit without spray residue. Meanwhile the Asian market required fruit free from pests and diseases.

So producers had to make big changes, adopting integrated pest management programmes. The industry shifted from ‘take-all’ pesticide use to selective products that killed target pests but kept ‘beneficials’. Simply said: chemicals now used on apple orchards take out the bad guys but keep the good bugs to support biological, natural control. Insecticide use has reduced by 80%.

To protect those antioxidants and keep apples crisp, store them in the fridge not the fruitbowl. They’ll last a month. And by the way, we’ve been eating apples all wrong. Start from the bottom and eat upwards. The ‘core’ is a myth, it’s ‘apple’ the whole way up with just a few seeds in the middle. Spit those out and maybe a new apple tree will grow one day.