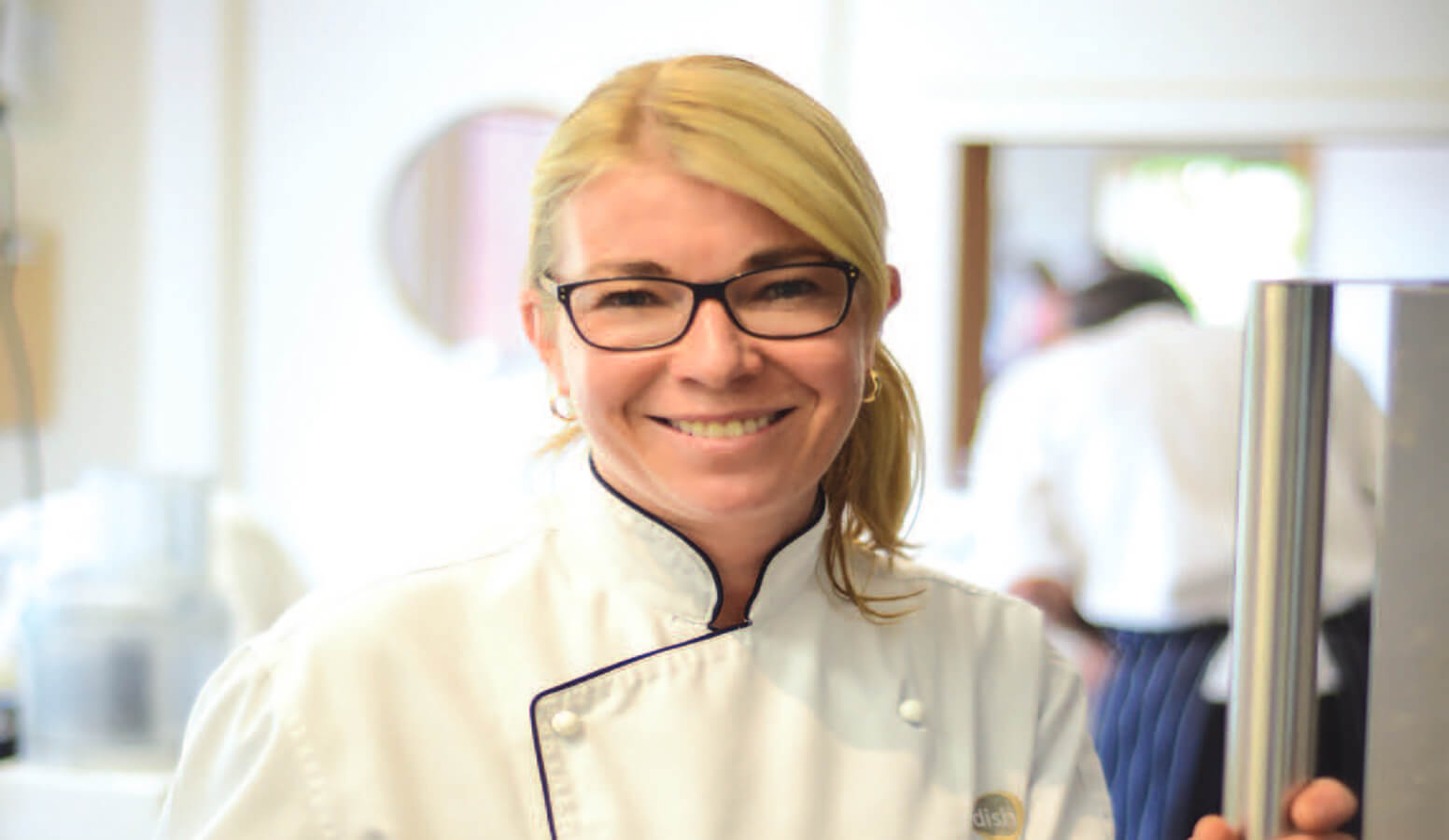 Capturing the catering quarter in a pretty competitive market could be a daunting prospect. Particularly in Hawke’s Bay which harbours a plethora of talent.

So when Jenny Parton set out on such a mission some fifteen years ago she was clear-eyed about the challenges. Her latest coup is the contract for the Napier Conference Centre. Sure proof she and her company, Dish, have the magic ingredients when it comes to making moments memorable.

Food wasn’t at the forefront of Jenny’s ambition list when she left school. Fashion was her love. And she admits she still has a passion for design.

But following a course in graphic art she took o to see the world and found herself working in a ski chalet in Europe. “I thought I could cook,” she comments wryly. What that experience did do though was guide her creative streak onto another route. “I attended Battersea Park College in London which provides a very practical curriculum, so much so not that many students stayed the course. We had a lot of tutors who were French-based, which isn’t necessarily my most favourite style of cuisine but it gave me a great grounding.”

In fact, her taste buds were awakened by the flavours she discovered while later travelling in Asia and certain parts of Europe. Once back in Auckland she worked with well-known chef Paul Jobin for several years. “Paul was Japanese-trained so that too heightened my interest in Asian food. I love the rather crisp effect it has and as I am dairy intolerant I was never into the rich creamy sauces of the more traditional cuisines. Currently I am dabbling in Moroccan; I really like strong flavours. And also I instinctively lean to the health side of food preparation, coming up with new salad combinations. And juicing.”

Though she enjoyed working in the big city, an opportunity as a sous-chef with Vidal’s drew her to Hawke’s Bay. “I had never been before so it was a leap in the dark. But I loved it and since then I have cheffed in a lot of wineries including Sileni, where I ran both the fine dining and the more casual restaurants.” Her experience in such kitchens also opened up an invitation to be guest chef at the prestigious world gourmet summit in Singapore … further adding to her love for Asian food.

Despite the fact that as a restaurant chef she had the chance to be truly adventurous with her menu, Jenny wanted a new challenge. She had never done catering before. But undaunted, she found the opportunity to produce a fabulous event allowed her creative streak a fresh outlet as she designed special settings, put together amazing menus and harnessed all the essentials that make a marvellously memorable occasion. “My greatest pleasure comes from being able to suggest a concept to a client who may not have ever considered it before or thought it possible, and to see their eyes light up and a sense of relief in knowing they are talking to someone who is as inspired about that moment as they are.”

With 59 staff on her books, this is obviously something on which she thrives. “Though it is more predictable, with a higher volume and by necessity a more conservative range of dishes, there is still a wide vista of opportunity to create something special – lots of small plates, sharing plates, offering the unexpected … it’s just a matter of imagination. And this is what the catering side can do which cheffing can’t. And it is probably why so many chefs move around looking for something fresh to whet their appetite.”

However, she is the first to admit it was hard starting out. “I was so used to working nights, prepping till 11p.m. And a new venture is always a learning curve. But this is much more predictable. It’s all about budgeting and forecasting and defi nitely good organisation. You do spend a lot of time juggling because often there is more than one event on the same day. Our record is four weddings in one day! I allocate competent staff to each job and I do oversee all the food preparation. And every other aspect – particularly service – is discussed in detail well beforehand.”

“We do have a list of preferred suppliers and resources. I love the Farmers’ Market and have huge respect for Graeme Avery who started it. We use Mardigras Event Hire a lot and have a close working relationship with them. And for flowers, we prefer The Flower Studio. We work alongside the very talented Rachel Stewart for all design and styling. Actually we do as little or as much as clients require; you have to be very adaptable. And venues can definitely influence the style of food and presentation. Barbeques in the middle of paddocks are a far more realistic approach than a three-course fine dining experience in a tent, which can attract swarms of mosquitoes.”

Weddings are a big part of the Dish business. And obviously hold a particular appeal for Jenny because of the chance to communicate with clients and create something unique and unforgettable.

But she confesses that the new contract with the Napier Conference Centre really has her salivating. “We had the Opera House which I loved and then the doors closed, so this is really great. Our base is still there in the Opera House complex and our main kitchen is there too. It was tough when it closed as I was trying to keep everyone employed because having loyal sta is a huge part of this. After all you are only as good as your team. I have chefs who have been with me for 15 years on and off, and it is hard to find good staff. We advertise on Trade Me a lot and on international sites, so we have people from as far as South Africa and Vietnam. Word of mouth in the hospitality business is a huge help.”

Jenny’s aim is for Dish to be known as having one of the most capable and comprehensive catering companies within the area, so her attention to building and maintaining an efficient and effective team is understandable. As they say, it’s all in the mix.

The Pop-Up Dish at Red Barrel Winery was initiated this past summer “because the owners wanted to bring some life and vitality to the winery”. Serving lunch Thursday to Sunday and dinner Friday to Sunday, it has achieved its purpose. Her long-time colleague Brent Cameron is head chef. “He used to run Sky City where he was doing 1,000 covers a day, but he wanted to get out of Auckland. And he ran Te Awa for a number of years, so we know each other well.” Dish (the company) also runs Church Road Cellar Door and Restaurant, which again provides stability for the organisation, “so important when balancing books to have reliable revenue”.

With two small children of five and eight – “who are absolute foodies; they were into blue cheese and mushrooms before they could talk!” – Jenny acknowledges that much of her determination and ability to carry on – “though I have had a few sick days spent under the kitchen table” – is due to a very strong group of women, both friends and employees, who support each other. “I also have huge support from my partner and a team of mothers who roster school pick-up and drop days.”

Art Deco was looming large on the horizon when we spoke; Dish was doing twelve different functions. As was the opening of the Napier Centre on March 4th with huge pre-bookings – “In fact at this stage I haven’t even put them into the calendar … it’s too scary”.

So Jenny and her colleagues at Dish are hitting the ground running this year. She puts it all down to her remarkable team. No doubt they put it down to having an equally remarkable boss.