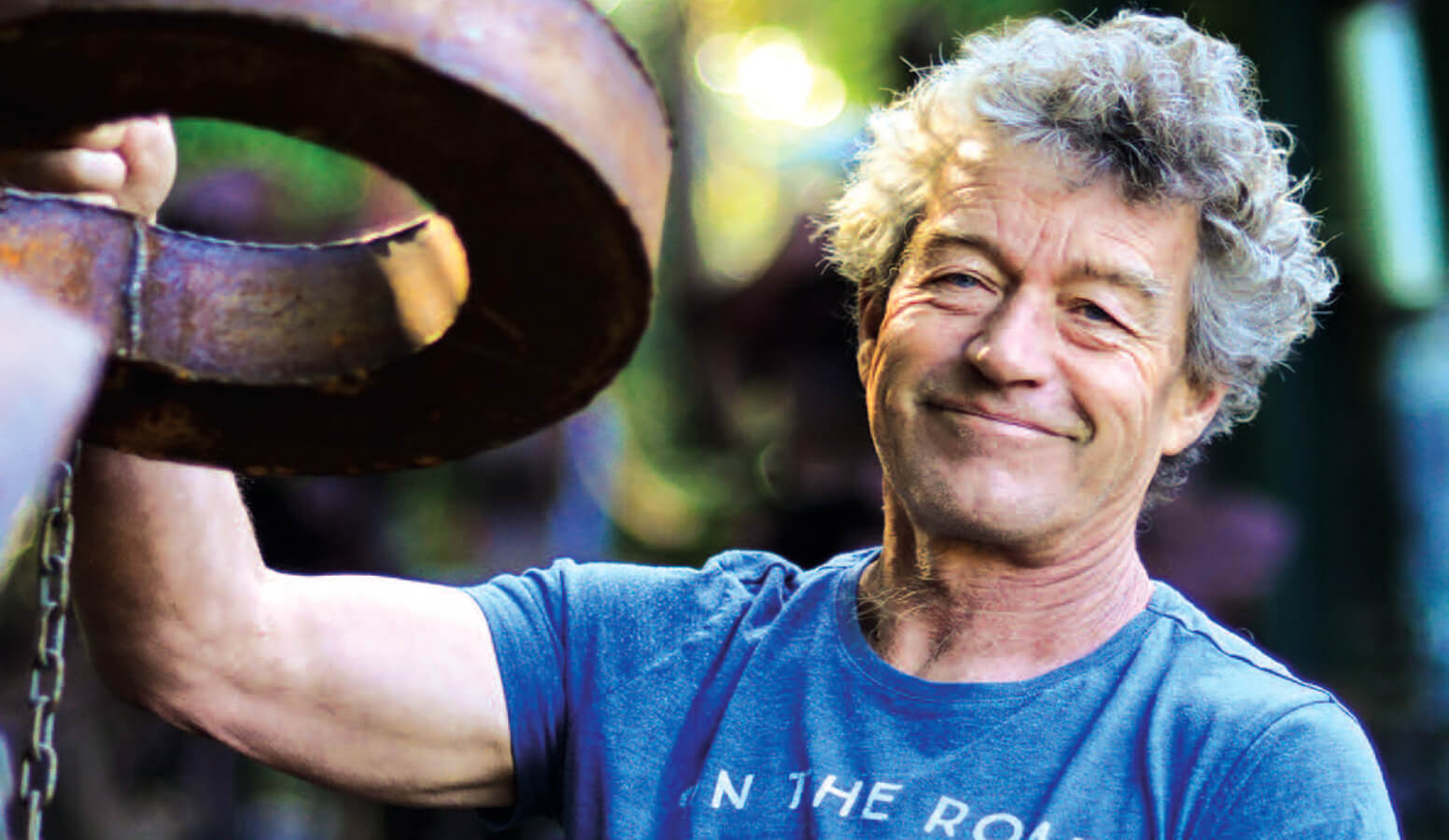 Ricks Terstappen with Life Goes On, but Not Forever, his sculpture from 2016/17 group exhibition EAST. While he was working on it, he told his friend William Jameson it would be called Life Goes On, and William remarked, “But not forever.”

To drink coffee with sculptor Rick Terstappen is to hear stories.

His art-packed cottage adjoining the workshop just outside Havelock North is a cosy space filled with stories – some tall, some true, and some so colourful and gorgeously mad you just don’t care whether they’re for real or not. If these walls could talk, it would probably be with a thick Dutch accent and the unique vernacular absorbed over decades of yarns spun around his solid kitchen table.

Since emigrating (accidentally – but that’s another story) from Holland aged 21 in 1978, Ricks has been making art and making his name here in Hawke’s Bay. His work is distinctive for its strong, rustic aesthetic. While he started out as a wood carver in his twenties, these days the material of choice is more often steel – Corten, mild, rusty or galvanised, often recycled.

Recycling has always played a big role in Ricks’ work, right from his first exhibition in his hometown Venlo, where the eleven-year-old budding artist showed a body of work made from bottle tops he’d been collecting from bars.

In 1991 another act of recycling took centre stage in Ricks’ life as he and fellow HB artist David Guerin heard the railway building on Napier’s Monroe Street was to be demolished. The Wellington owners of the property were calling for tenders for the demolition and Ricks was so excited by the materials to be salvaged and used for sculpture, he talked David into going halves with him in an offer of $1,000. He was soon informed by a friend that you don’t pay to do a demolition, you charge, so he left the figure at it was and entered the tender.

Weeks later he and David were informed that they had been successful, though the Wellingtonians were interested to know how these two were going to be able to complete the demolition for $1,000, when the nearest other tender was for $78,000! Equipped with a crowbar, a hammer, a chainsaw and a little car towing a trailer not long enough to remove any of the beams they had been so keen to get their hands on, Ricks and David called in all their favours and got the job done, only four months late.

The wood from the great demolition is still making its way into new sculptures twenty-six years on, so it was worth it, clearly.

Almost any group show here, from charity auctions to EAST, will likely feature a piece from Ricks. And the work of other exhibiting artists will oft en have his fi ngerprints on it too, because Ricks is a collaborator and an ally to many, sharing his knowledge and his collection of tools with anyone who asks.

Ricks was helped along in the early days by Para Matchitt and Jacob Scott , who set up the art centre at Otatara in the late seventies. He then went on to the Polytech (now EIT) and completed the two-year diploma course followed by two years of studio practice. It was useful, he says, for collaborating, taking time to learn and explore new techniques and media, and beginning to build up the supply of tools.

Collaborating is still his preferred way of working. It brings out the best in him, he says, and there’s never a lack of people to work with around here.

“I get more done with others, because we’re all keeping up together.”

He’s a central and beloved character in the close-knit local art community. This community, Ricks comments, is “small enough that we all know each other, we all respect each other. We like to help each other.”

There’s always someone to call on for help or to fi gure out a challenge posed by a particular work, he says. “It used to be William [Jameson] of course, but I’m working a lot with others still.”

Right now Ricks, Jacob Scott and others are putt ing the fi nishing touches on a large-scale sculpture – a ruru atop a tower, named Kohupatiki Pou – that will adorn the cycleway near the Tucker wool store just outside Clive, a site of cultural signifi cance for local iwi.

One response to “The Great Collaborator”