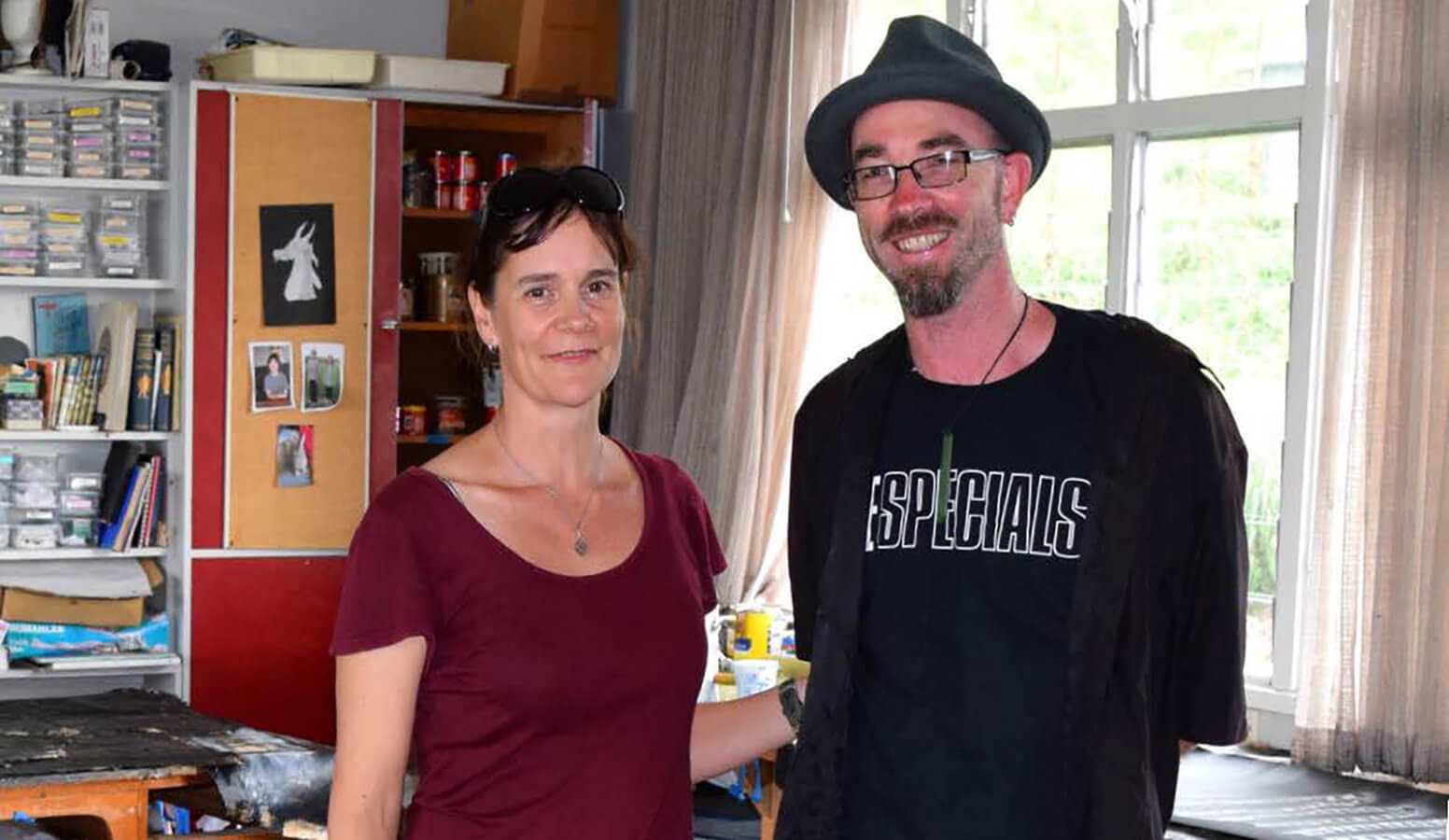 High on a hill above the river and the rural community of Maraekakaho, the spacious house feels a very long way from their Newtown cottage, but for Michele, the return to Hawke’s Bay and its nostalgic familiarity has been a driving force in her work since the couple and their two children arrived in early 2015.

Michele grew up on the family farm in Kereru and left for university in Wellington twenty years ago. Her work became well-known during the early 2000s, an exciting time for artists as the internet took hold, and an exciting time in Wellington as Peter Jackson and Weta Workshops made their mark on international film.

Michele’s printmaking work has long been preoccupied with coming and going, travel and belonging. The airplane motif is perhaps her most recognisable.

Her recent series of relief prints – To Live in the Country – provide a window to Michele’s memory of a childhood spent surrounded by old country homes, farming characters and the simple aesthetic of stenciled signs and stamps. Another series is based on the comic books of Michele’s youth, either handed down from older cousins, or bought on those special trips to town.

The house Johnny and Michele relocated to their block of land from a bit further up the valley is one of those sprawling weatherboard homes Michele remembers from childhood. And being back here in rural Hawke’s Bay has highlighted the fact that here, people spend more time in their homes, as they did back then too. In Wellington, Michele says, more of life seems to be lived in communal spaces, in the city. So the domestic setting here has become a more immediate inspiration for her work.

For Johnny, there have been changes to his oil painting practice too. The weather seems like an obvious difference between Wellington and Hawke’s Bay. But what that really means is long balmy evenings and the insects that come with them.

“The temperatures in summer make it tricky for the paints and printing oils, and I’ve started including moths in my paintings, as they’re here anyway.”

Johnny’s atmospheric paintings of suitcases, bags and trunks convey a mood and a sense of mystery, so the bright, broad light of the Bay has taken some getting used to too. He’s countered it with a confined space within the sprawling ex-classroom the couple have turned into their studio behind the house.

Johnny works part time as technician on Ideaschool’s Screen Production programme at EIT, which is a fair way removed from his former career with Weta in Wellington.

Michele and Johnny met while working on Lord of the Rings in 1998. She was working on armour components in the costume department. His work at Weta was wide-ranging over the years, but his main job was in paint finishing, or as he puts it, “Making the non-authentic look authentic.”

They were exciting times, as the industry was developing in part based on the techniques the Weta team were creating.

During The Last Samurai (the last film they worked on together) Johnny started painting part-time in the Newtown house after hours. It stuck, and the paintings started to find an audience. The compartmentalising of art work and other work which he developed then is serving him now with his EIT role.

Michele and Johnny now have gallery representation around the country, something that is easy to maintain they say, now that they’ve erected a parcel shelter at the bottom of the hill for the courier.

There are still regular trips back to Wellington, and later in the year they’re heading to Spain and Italy to visit galleries and seek out artistic inspiration.

For a pair of artists preoccupied with travel and return, this spot, with small planes flying low in the valley, seems like a pretty perfect spot to come home to.