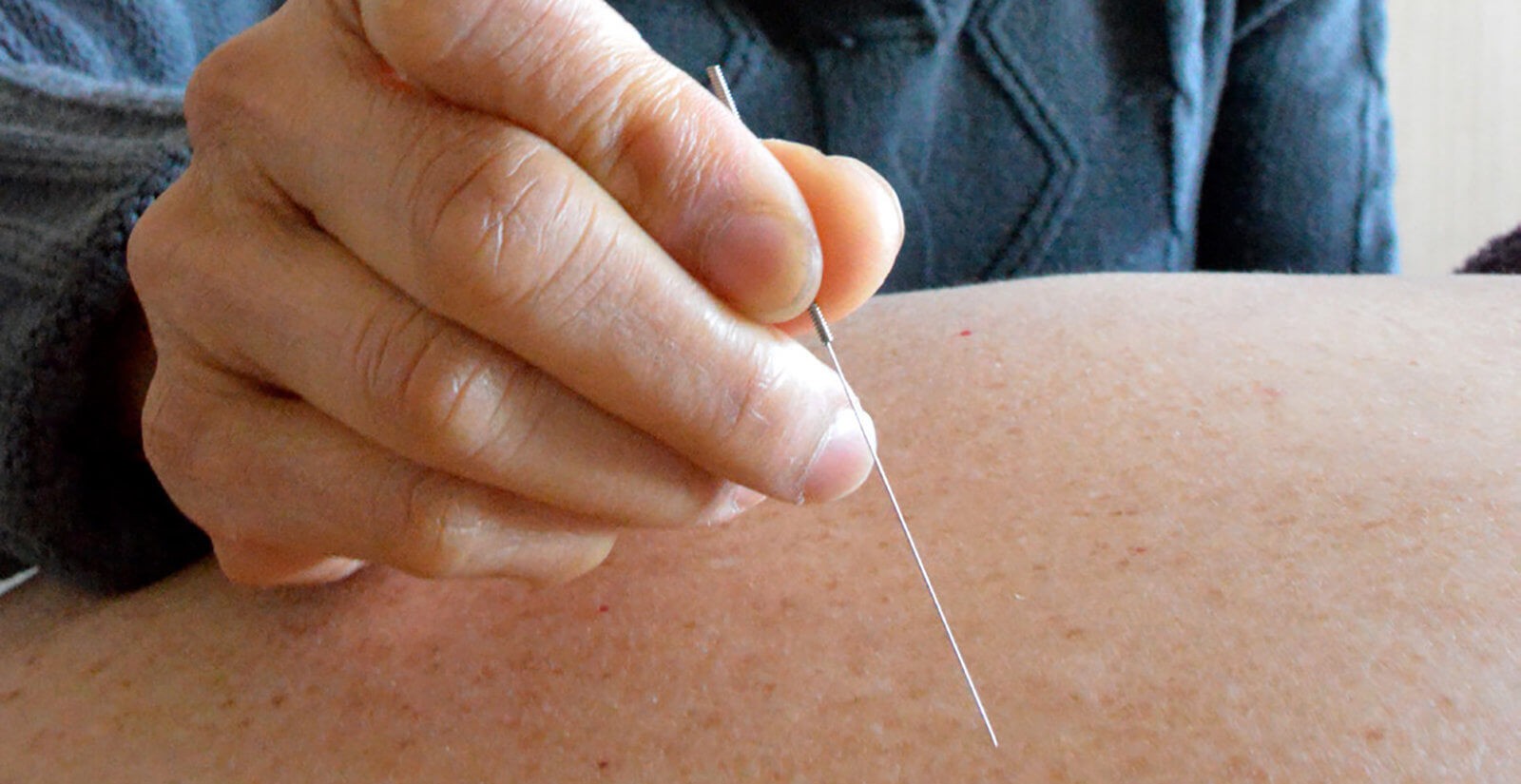 Are you afraid of needles?

Then the thought of a therapy that inserts needles into the body as a method of healing may switch you right off.

However, many other New Zealanders are looking at acupuncture as an alternative solution to pain, mental suffering, and disease. In the fi nancial year 2014/2015 ACC funded acupuncture treatments to a value of $27 million dollars. This is a dramatic increase from 2003/2004 where the value of treatments amounted to $3 million dollars.

Many of these claims were for soft tissue related injuries, but claims were also made for mental shock, deafness, and occupational disease. The industry in New Zealand is worth $70 to $75 million dollars, with 1,000- 1,200 practitioners nationwide.

Around 810 of these are registered with ACC. To be a registered ACC treatment provider, practitioners must be a member of Acupuncture New Zealand – NZ’s largest professional body that represents practitioners in Chinese medicine and acupuncture.

The New Zealand School of Acupuncture said “the medicine has grown in popularity, partially due to ACC recognition and through the growing body of research validating acupuncture. The desire of the general public to take a more holistic approach to managing their health also plays a large part.”

Growing acceptance of acupuncture is not just a New Zealand trend. In the UK and the US demand for acupuncture is growing exponentially. The US Food and Drug Administration is currently working on a blueprint for doctors to use a ‘multidisciplinary’ approach, which highlights acupuncture for pain management, in an e ort to reduce the use of addictive opioid drugs as pain relief.

New Zealand’s relationship with acupuncture as a pain treatment has been steadily developing since the early 1970s, when the Chinese Government invited a New Zealand delegation to observe medical administration and public health. Up to this point acupuncture within New Zealand had been largely confi ned to the Chinese communities. This visit created division within the New Zealand Medical Association. Many doctors remained dismissive of acupuncture, but, based on observations brought back from China, some doctors and physiotherapists began incorporating aspects of acupuncture into their usual practice.

Acupuncture forms the basis of Traditional Chinese Medicine (TCM). It is believed to be one of the oldest therapies known to man. The basic theory of acupuncture is to balance the body, mind and spirit by regulating the flow of qi (pronounced chi). Qi is the vital life force of humans which determines the overall health of the body and mind.

When you are healthy, qi flows uninterrupted through the meridians. Meridians are channels that make up a continuous circuit of pathways that flow along the surface of the body and through the body’s internal organs. Qi is made up from a combination of genetics and lifestyle — what we were born with, the food we eat, and the environment we live in.

When you are unhealthy, stressed, or experiencing pain, the flow of qi has become blocked. Experienced practitioners unblock the flow by inserting very fine needles in specific locations along the meridians. These points are acupuncture points or ‘Ah-shi’ points, translated as “yes, that’s it!”

Acupuncture is progressively being used by mainstream health practitioners, physiotherapists and chiropractors for pain relief, the treatment of injuries, and musculoskeletal problems. Traditional acupuncturists believe this type of practice should be referred to as ‘medical acupuncture’ or ‘dry needling’ (DN), as practitioners of DN seldom use the underlying philosophy of Traditional Chinese Medicine.

DN is receiving a high level of scientific investment as it targets the exact location of pain. According to research, needling causes the body to produce adenosine, which reduces inflammation and pain. DN is very Western in its nature, as it only deals with the direct, localised symptoms, not the root cause of pain, or the whole person. 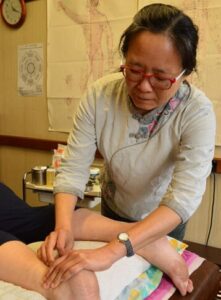 Ming Lee is a TCM practitioner based in Hastings. Lee studied both Chinese and Western medicine in Taiwan. On completion of her nursing degree she worked for five years as a paediatric nurse before coming to New Zealand.

“I originally only came to New Zealand for three years, 22 years on I am still here! I stayed in Auckland first but I had to leave Auckland to learn English, too many Asians in Auckland! To learn anything you have to become it, in the deep end”. Ming moved to Hawke’s Bay in 2001 and worked at Hawke’s Bay Hospital before opening her TCM practice in 2006.

Ming’s drive to practise TCM full-time came about from losing her father. “I had to return back to Taiwan where I nursed my father for four months before he died. He had a stroke, but it was not the stroke that killed him. It was the side effects of Western medicine. Western medicine focuses on the symptoms, using drugs or surgery to treat them.

“TCM works on the whole body restoring balance both physically and emotionally. Many first time clients come to me as their last option when Western medicine has nothing left to offer. TCM gives them hope. I change people’s minds every day. I see their excitement as they receive instant relief.” Smiling, Lee continued, “Some of my clients call me ‘Magic Ming’ but really there is no magic, most of the problems with people is their own heads!”

One such returning client is Megan McGinniss, Assistant Manager of Clive Swimming Pool. “I had always gone down the mainstream route, with osteopathy being the most unconventional”. McGinniss had worked in hospitality 15 years. “Making three hundred coffees a day and standing for eight hours straight on concrete floors I found I had increasing neck, shoulder, and back pain. Having historical injuries from competitive sport, bad habits, bad posture, and fluctuations in my weight, I really needed some help. I didn’t feel my doctor could deal with all this – so many little things, I didn’t know what to do. Painkillers were not the answer.

“I was nervous. I made my way through a labyrinth of stairs and corridors in an old Hastings building. I was greeted by a small Chinese looking lady, beaming, with a real presence. She ushered me into her modest treatment room. Before I knew it I was on the bed with needles in my ankles. The sensation differed depending on she put them. Some insertions hurt, only momentarily, while others created a tingling sensation that travelled up my leg.”

That was the first treatment of many, McGinniss commented, “Ming has become very much part of my life. The treatments have helped improve my entire wellbeing. I suffer far less muscular aches and pains and feel supported in managing my own health. I see Ming for so many different complaints, from not sleeping to spraining my ankle after a fall. I still get niggly pains in my body – they haven’t been miraculously cured, but I know without the treatments my quality of life would be poor.

“I have a young active family, work 35 hours a week, and coach the hockey team, I need to be mobile and emotionally stable, the last thing I wanted was a constant prescription and snapping at the kids. I still use other practitioners and see my GP, but TCM is my treatment of choice.”

When Megan started her TCM treatment she could book an appointment for the same day. Five years on she may need to wait up to two weeks. “I book my next treatment then and there, when I’m o the table, otherwise I will have to wait! To be honest, I have stopped telling people about Ming!”

More and more people are no longer content with simply popping a pill. Acupuncture is a therapy producing results for many and should be regarded as part of medical practice – not an alternative. It will never be everyone’s cup of tea, and for some it may not work, but the growing numbers of meticulously trained practitioners and converted patients speaks for itself.