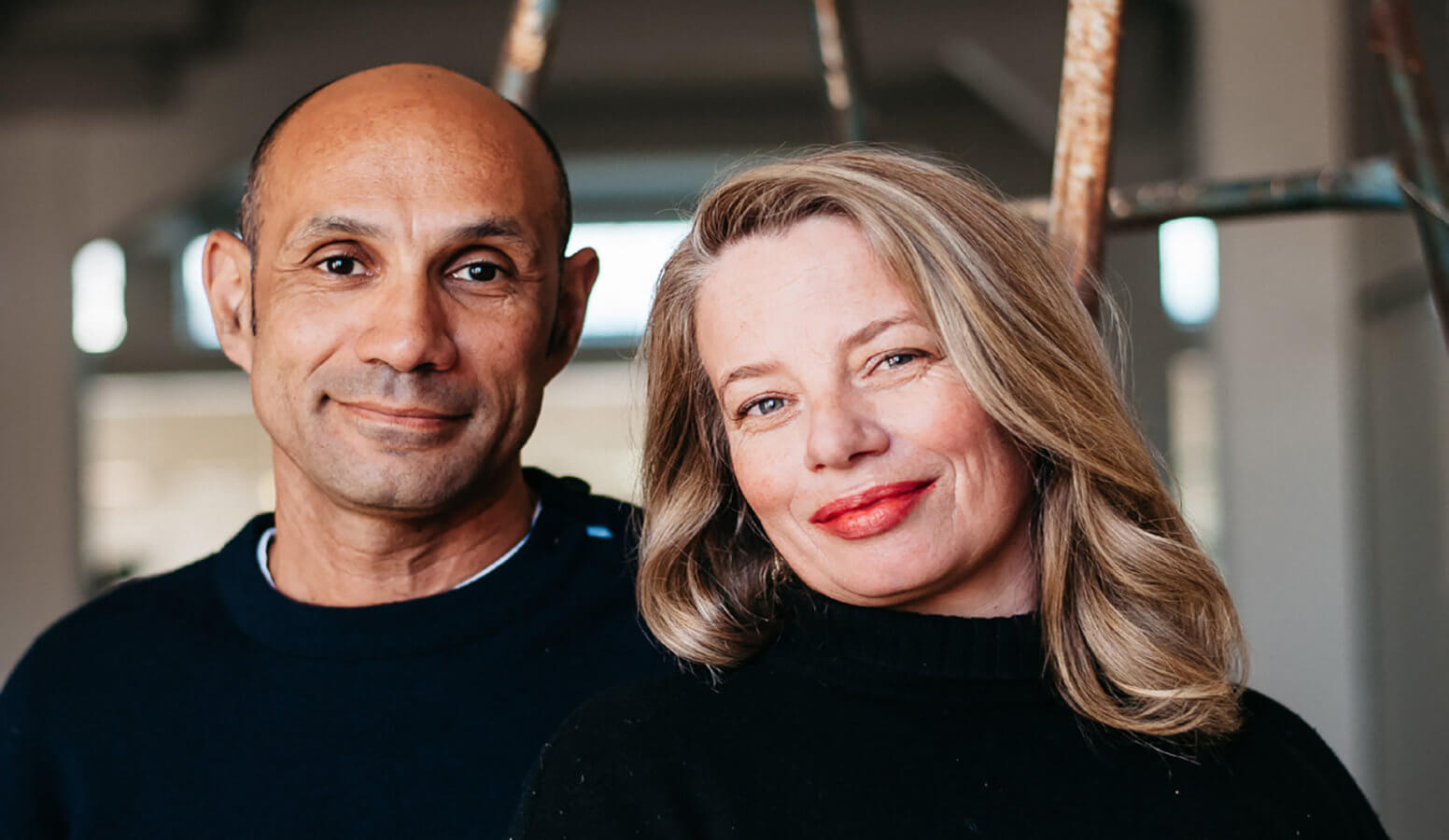 “ A Loaf od Bread,” the Walrus said, “is what we chiefly need.” No doubt if Moise Cerson – bread maker extraordinaire – were to encounter Lewis Carroll’s Walrus and the Carpenter he would insist that the bread would have to be a sour dough fresh out of his oven: essential if the oysters were to taste any good!

Like the breads he and his team of five bakers regularly produce out of Ya Bon’s bakery in Hastings. He’s there from the wee small hours in the morning at least four times a week. And loves baking. Mixing the dough. The heat of the oven. The seductive smell. He finds the whole experience truly sensual.

Well, he’s French. And that explains a lot. In France beautiful bread is regarded as the staff of a meal, if not life, and considered as much an essential component as fish, pasta or vegetables. “If you spend a lot of time and e ort making a beautiful tagine – some fl u y substance that goes under the guise of bread to accompany it, just will not do. It deserves beautiful artisan bread. Freshly baked. Preferably sour dough.”

To him making bread is a sensory thing. “But it’s tough. It’s not the romanticised version you may have got from a movie like Chocolat – not like that at all. It’s very physical. Hard. But electric. I get a buzz out of it from the time I arrive and all the ovens are on … and working as a team. I love the big oven. Friday and Saturday are our biggest days. I enjoy the balancing and the logistics – the outside temperature vis-à -vis the inside and how they affect the baking result.”

Born in Brittany – his mother is French, his father from the Caribbean – his teenage years were spent in Paris where he started learning the traditional French cooking style. And discovered he liked the “sweet part” so spent time learning the art of fine pastry making in Paris patisseries. He travelled extensively, always pastry cheng. A friend from New Caledonia encouraged him to visit where he spent around 18 months before moving to New Zealand “to learn English”. A year after that he went to Australia. 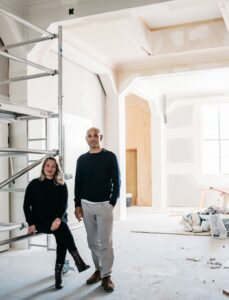 Andrea and Moise in their new Hastings premises

There he worked with many legendary chefs and restaurants regarded as Australia’s crème de la crème – Peter Doyle’s Cicada in Potts Point, Mark Best, known for his fine dining cuisine at Marque.

“But I always knew I would return to New Zealand.”

That move was ensured when momentarily working for the illustrious and internationally renowned chef Bill Granger, at his first restaurant Bill’s in Darlinghurst. Here he met Andrea. He courted her over co ee. She was the barista.

Andrea is a Kiwi, from the Wairarapa. And after studying natural medicine at uni she moved to Australia as “a stepping stone”. Together they went back to France – the south for which they have a special a nity – then moved back to Sydney and after having their first son (they now have three teenagers all attending Napier Boys’ High) they felt the lifestyle was not right to bring up a family.

So they came back to the Wairarapa’s Greytown. And opened the French Bakery. It became virtually a household name. At the same time they produced three sons in four years. For ten years they focused on producing authentic artisan pastries and breads in true French fashion. Staples like baguettes, croissants (almond particularly popular), croustades, Danishes. And delicious breads.

When the boys were ten, eight and six they took them back to France and spent a lot of time in the south. “When we came back,” explains Andrea, who is unquestionably the other particularly good half of Ya Bon, “we wanted to replicate that way of life.”

With Hawke’s Bay as their ideal, within a year they had moved here and opened Ya Bon in Hastings. Andrea runs the logistical side of the bakery. As anyone who has been involved in anything related to hospitality will know, a chef needs to focus on what he does best and a business partner is essential to his or her success. “She knows everything going on,” says Moise, “it is a real partnership.”

They are frank about the fact that running a bakery is hard. Their wholesale clients are a bit like the Hawke’s Bay culinary who’s who. They’re in all areas – Havelock North, Hastings, Clive, Ahuriri and Napier – and wide-ranging – Black Barn, Craggy Range, Georgia, Hohepa, Vetro, Box, Fresh Picks, Strawberry Patch and Orchard Store to name but a few. Wright & Co is up there at the top of the list. “We have always been with them,” says Andrea. 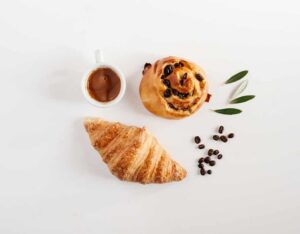 “We started o young so ten years later when we moved here we had ironed out the kinks and the business structure pretty well replicated what we did in Greytown.”

“We naturally wanted to go into wholesale,” she explains. “But now the size of the shop (they have a small retail frontage) and the kitchen behind is just too restricting. And we want to go to the next stage with people being able to see and participate in what we are doing and creating. Now we’ve done our time and want to move on.”

The move to new premises is scheduled for August-September – still in Hastings and Heretaunga Street, but now number 216, beside Hutchinson’s.

We love Hastings,” they both enthuse. “The people are from all walks of life. We really enjoy the exchange with our clients and customers, their appreciation. And we have good relationships which we rely on.” Their clients are in the main small business owners and they feel it’s important they get what they need – “we can talk to them and get fresh ideas which help them with their businesses. And of course us.” In fact it’s beneficial for both sides, as she acknowledges, for their clients in turn rely on Moise and Andrea to give them what they feel is right for their particular clientele.

They are partnering with Al Borrie, whose co ee from Firsthand is renowned at both The Box Espresso and Crazy Good. So the new premises will be 1/3 café, “not a lot of seating”, and 2/3 bakery, with the emphasis on the product.

“People love to see what’s going on in the kitchen and having the experience of seeing it firsthand we feel is important,” explains Andrea. “There is a lot of interaction. And eventually we would love to have small groups to come in early in the morning and share a co ee while watching what’s happening in the bakery. The decor is simple. Al’s aesthetic is modern, minimal (to which anyone who has been to the container that houses the Box will attest) and we want it to be accessible.”

Andrea will also have a small section for retail, selling much sought-after produce from places like La Fromagerie in Auckland (highly rated by TripAdvisor), “little temptations”, and taking catering orders. Also on the menu will be a variety of par-baked foods for the industry, plus celebration cakes.

They knew no one when they moved to the Bay. And they are hugely enthusiastic about what they have discovered here. “It’s not just the same old, same old, “Andrea laughs. “Each town has its own character.” They live in Havelock North where they really enjoy the village ambience (Moise can be seen cycling happily on Te Mata Peak). The boys initially went to Hereworth and now bus to school in Napier each day, “they’re used to the big distances in the Wairarapa”. Moise and Andrea visit Napier a lot because of this, but they find it also has the added benefit of an easy and constant communication with their clients in the area. And of course Hastings is their second home base.

Ya Bon is good. Very good. No doubt, with this move, Ya Tres Tres Bon.