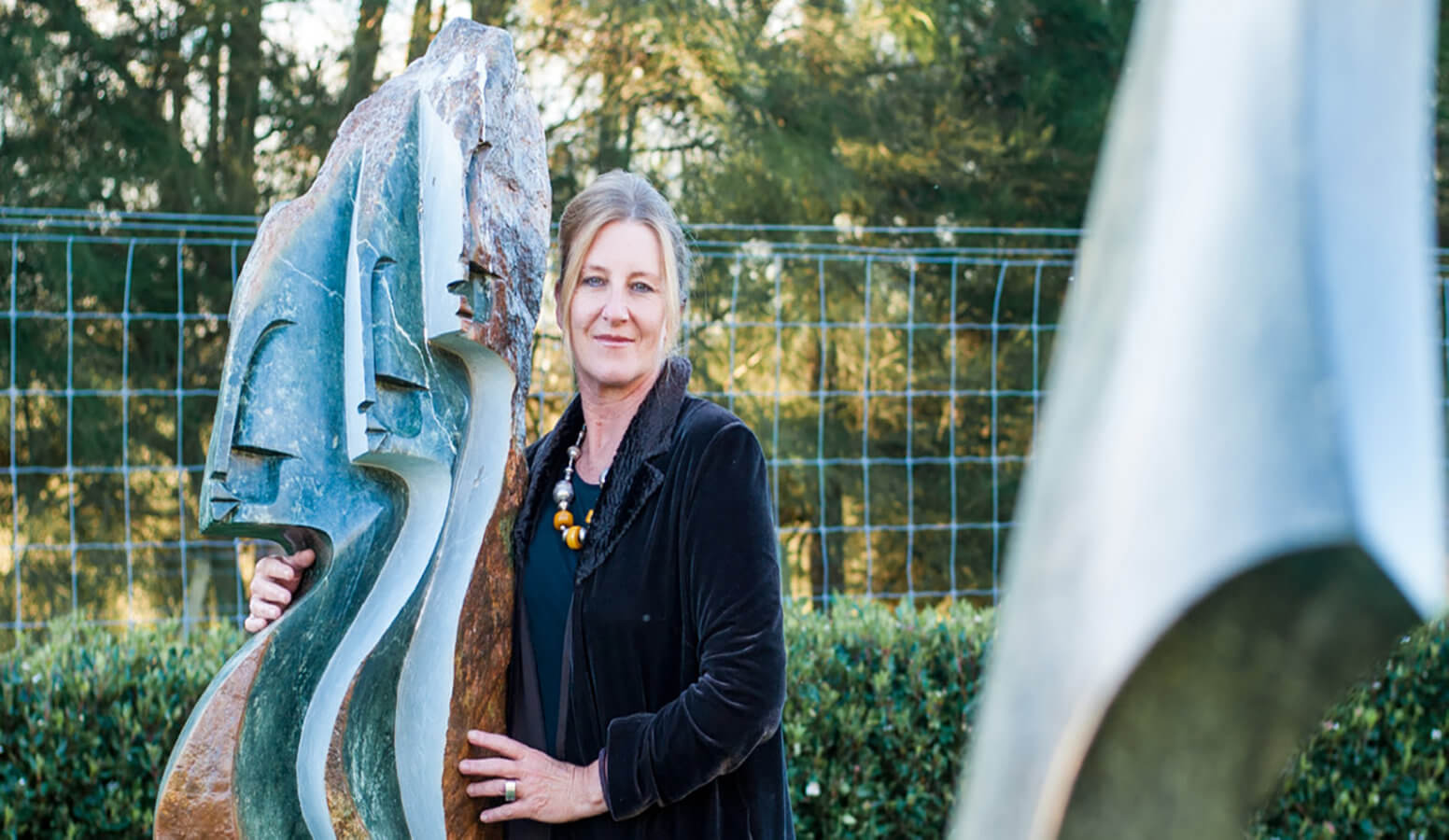 Being thrown off your land at gunpoint with no compensation could thwart the spirit of even the most stalwart. For Bruce and Louise Stobart – both third generation Zimbabweans – indeed it was heartbreak. As a newly married couple they had bought 2,000 acres of completely undeveloped land in 1993 about an hour’s drive out of Harare and within ten years had turned it into a highly successful farm supporting 60 families.

Yet not surprisingly, they took the words of Nietzsche to heart “that which does not kill me makes me stronger” and reinvented themselves. “We had to,” says Louise with her easy forthright realism. And with that as motivation they took out the checklist for ‘where to next’. Location was important. Hawke’s Bay got the tick. They knew no one apart from Rob and KK Marff y and Tim and Jules Nowell-Usticke (part of the well-known Zimbabwean community which has made such a difference to the Bay). Certainly no close family. But after arriving with their three children in 2003 and a couple of false starts they opened Birdwoods Gallery in 2005. Louise had the vision of representing Zimbabwean craft. The gallery was the result. “Fortunately because we did have a lot of staff in Zimbabwe”, which she acknowledges as simply being the typical way of life, “I did know how to delegate. Well, it was imperative if you were to run a successful operation in Zimbabwe. And we had the energy. Of course had we known just how hard it would be and the cost involved in actually getting through the bureaucracy we may not have been quite so naive and strong willed.”

She also had the experience of already having tapped her entrepreneurial and creative talents with a companion enterprise to their farm in Zimbabwe – Birdwoods Metal Sculpture: in which her designs were realised in unique metal sculptures using recycled 40-gallon drums. An additional 30 families, part of the farm village where primary healthcare and community facilities were provided by the Stobarts, were employed as a result.

Obviously art is a part of the Stobart mind-set, so it was the metal sculpture which formed the initial imprint for their creation of Birdwoods, with their sculpture garden and walk. But also included was the stone sculpture that is such a strong part of the Zimbabwean heritage. And it was well received.

They quickly realised that tapping into the richest resource that is a distinctive part of Zimbabwe was a unique facet of the sculpture walk and garden format. Stone sculpture owes its origins to the Great Dyke – a 310 mile ridge of 2.5-billion-year-old hills laced with chrome, platinum, gold, copper, emeralds and other precious metals. And the longest linear mass of volcanic rock in the world.

So carving stone is plentiful, with a Pandora’s box of beguiling white granites to stunning serpentines in shades of reds, greens, maroons, greys, yellows and brilliant oranges. A virtual catalogue of immense mineral wealth. Often called Shona sculpture after the largest tribe engaged in sculpture and the oldest in Zimbabwe (legend has it they were the guardians of King Solomon’s Mines), it has become, despite the country’s political and social instability, a truly contemporary art force; the single most collected form of African Art internationally, it is in the Museum of Modern Art and the Rodin Museum as well as in the homes of the Rockefellers, the Prince of Wales and Sir Richard Attenborough.

These sculptors produce breathtakingly beautiful work. The miracle of it is that they carve entirely by hand using very basic, even primitive tools, and work outdoors in specific sculpture communities. They select the stone at the mines, have it blasted and towed to their homes. Then study the stone and wait for the spiritual guidance which will provide their inspiration. No drawings.

They share facilities and equipment. The whole approach is collective, including the buying, transportation, mentoring, training and insight into what lies beneath the stone once they start work. They have no technical training; they teach and learn from each other. The sculptures are carved and polished by hand – sometimes even using river sand to polish. The resulting works are unsurprisingly called “spirits in stone” … for that is what they are: reflections of the artists’ traditional spiritual culture and their own amazing spirit in producing such stunning art.

Louise and Bruce travel back to Zimbabwe once a year to select and purchase, and in the course of time have developed incredibly strong relationships with the artists. They deal primarily with three communities and on a personal level. “We view thousands of sculptures and may only select 100 pieces as a result. This one-to-one interchange gives us the opportunity to discuss their work and lives and to negotiate and pay directly. And we have built up infi nite trust over time. We know the families intimately, are godparents to their babies. They know we will not rip them off. And that we will return regularly,” Louise explains.

It has taken them 14 or 15 years to reach the point where they are now the biggest stone buyers in Zimbabwe and also the biggest dealers in Australasia. One container a year arrives in NZ bearing some 150-180 stone sculptures, some of which are then shipped overseas again. This year will see their first exhibition in Dublin, Ireland in September; it will be their second international exhibition – the first being in Virginia, USA.

“The packaging and shipping is an art in itself,” explains Louise. “And Bruce has become a total specialist. The costs are huge as you can imagine; the packaging actually is more than the shipping.”

During their annual sojourns back ‘home’ they have noticed a defi nite shift in style. Partly due to losing many of the elders to disease like HIV and partly due to new artists emerging with a more sophisticated approach. “It is less native African and more contemporary, but one thing we have learned is the works do not target a particular customer. It is extraordinary the variety of the buyers who come from all walks of life. For instance a huge, and I mean huge, dolomite elephant has just gone to an apartment in Dallas that has recently been featured in Architectural Digest. Another to a woman who fell in love with a beautiful work, and she has a camp of garden gnomes in her home!!”

“It’s capturing the simplicity of the stone which is the hardest to execute,” Louise comments. “And there are artists who do a certain style repeatedly – like an owl specialist we work with who finds the raw stone at the quarry within which the eyes, beak, claws might surface. They fly out. Certain creatures appeal and owls are one. So are hippos and warthogs. And organic seemingly never-ending pieces sell well.”

Louise speaks of the artists with huge respect. “They are such humble people who still retain their integrity no matter their success. Gift Seda for instance produces the most incredible Picasso-like shapes, yet he had never heard of Picasso, much less seen his work; and he never deviates from his inspiration. The good ones are very strong in sticking to what inspires them and not being influenced by commercial markets. Steven Chikeya is another. His mother insisted he become a banker and he hated it. Finally he couldn’t do it anymore. He longed to be a sculptor and his first work – called ‘You Are Unbelievable’, because that’s what his mother said when he stopped being a banker – was superb. He is now selling all over the world.” 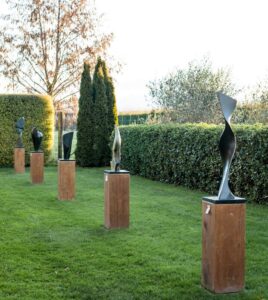 The relationship the Stobarts have with the carvers also represents a vital aspect of their business beliefs, as indicated by their concern for the welfare of their workers in Zimbabwe. “We left behind people who had to face the Zimbabwe of today. We were lucky enough to establish a business from our connection with Zimbabwe and our initial Birdwoods business itself, 26 years ago. We now have a symbiotic relationship in helping support those who are still there.”

“I do not want to sound patronising, but we feel so fortunate that we have something that not only has worked for us, but also for those in Zimbabwe. It benefits us in equal doses and that makes us feel we are really doing well. We were lucky enough to come here, but our home country was the catalyst for forming our business. So we credit everyone involved. As that saying goes – the sum of the parts is greater than the whole. That’s what we feel Birdwoods represents. Everything here has a story.”

And for pretty much everything available at the gallery, Louise and Bruce are personally involved with those who created it, whether they be artists from New Zealand or Zimbabwe. ‘We aren’t attracted to mass, manufactured or replicated work. We love the authentic, individual, quirky and the honest. Things with their own character and history. And we love the ‘waste not, want not’ nature of the art and craft which comes out of Africa. Waste isn’t a luxury they can afford and the products that originate from old things used in new ways have a much greater charm and intrinsic value.”

The new stone sculpture shipment of some 60 pieces will be launched at the Birdwoods Garden in Labour Weekend. Go to www.birdwoodsgallery.co.nz for more information