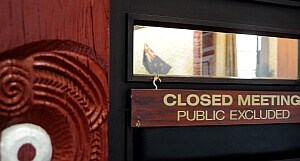 Prior to my own election in 2013, I petitioned the Regional Council and the Hastings Council to initiate video recording of council meetings.

The HBRC began to do so, starting initially with only full Council meetings, but then adding standing committee meetings and meetings of our Regional Planning Committee. I constantly receive positive feedback on this practice.

Obviously, viewing Council meetings is not everyone’s favourite pastime, but the fact that a video record is available does indeed enable those most concerned about Council decisions to see firsthand what is going on … who is voting how … and to better understand the personalities, issues and trade-offs at play. And to view our deliberations at their leisure, since most of our meetings are during the day when most folks have other priorities.

I might add that the media rely on these recordings as well for their own subsequent reportage, as they are not able to personally cover all Council meetings in real time. Our meetings are video archived and searchable by topic.

The reaction of HDC to my proposal at the time was to evade the issue — ‘a good idea, but …’  The Yule regime claimed that with amalgamation a ‘live’ proposition at the time, it was unclear that the HDC chambers would even be used in the future … hence making premature any investment in equipping the chambers for video recording.

Since that bridge has been crossed, I decided to query the current Hastings mayoral candidates regarding their views on video recording.

“Our council recently agreed, in the interests of openness and transparency for our community, it would install live stream video recording. Council staff is currently updating our council chamber’s sound system. As part of that work, and with a view to installing live streaming, staff has been asked to research the best video and sound technology.”

So it’s not an election issue after all, it’s a done deal …

A major step forward for transparency and accountability. Hopefully sooner rather than later.

One response to “Video streaming coming to Hastings Council”