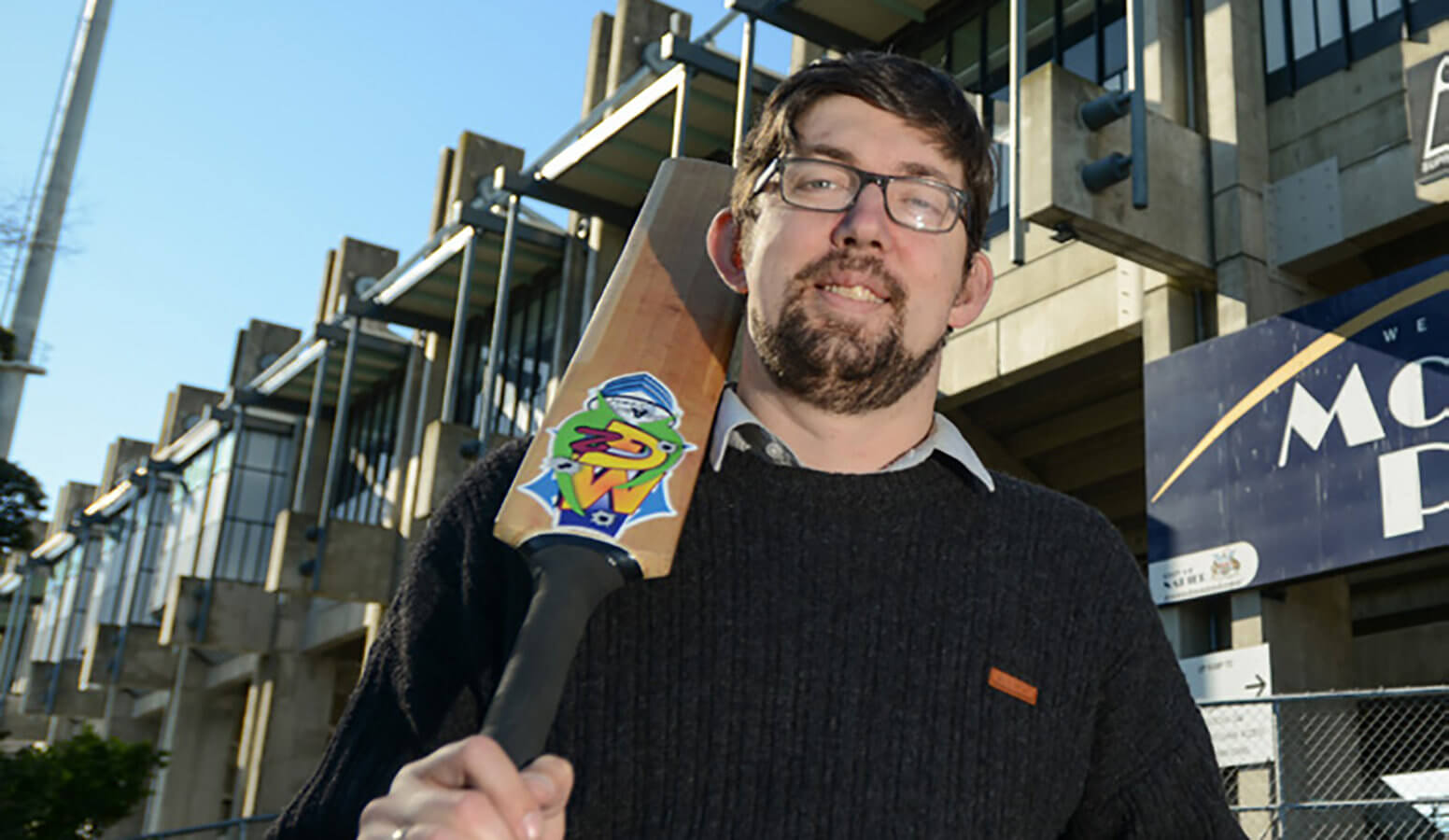 “Mayor’s Threat to Quit City” the subheading added. The mayor claimed in a “leaked” email that criticism – “by a small minority of Napier citizens on social media” – of Napier City Council, its mayor, chief executive, sta and councillors over recent events and council decisions had he and his wife “seriously considering other locations for our full retirement”.

“Disgusted” could also describe the growing feelings amongst Napier ratepayers, the city’s war veterans and their families, skaters, cricket fans, dog lovers, drinkers of pure water, fiscally- conscious ratepayers and even those just wanting greater transparency and accountability from their elected officials and council management over recent events in this ‘post-truth’, ‘alternative fact’ political climate.

As Sophie Price revealed in her ‘Napier Meltdown’ piece in BayBuzz (May/ June), Napier City Council has had major di culty seeing eye to eye with its ratepayers in recent times.

NCC’s “We know what’s best for you” approach, combined with little public consultation and an extremely low tolerance of criticism has created a widening gap between council management and elected officials, and the residents of the city they are meant to serve.

If the infamous Art Deco Bus debacle and inflated MTG visitor expectations were early warning signs, then MPI finding issues with the city pound – despite the council declaring if critics like Watchdog! “Simply got positive about things then the whole place would be a lot better” – was cause for outright alarm.

When the convenor for Napier City Council’s long overdue War Memorial public meeting remarked that “This community presentation hasn’t happened because of community pressure, but because it is part of council process”, she was met with uproarious laughter. A meeting with little actual exchange with citizens only proved how wide the gulf between public sentiment and council had become.

After months of public criticism, letters and texts to editors and online comments over NCC’s handling of the city’s (formerly “War Memorial”) Conference Centre refurbishment, the authority still refused to acknowledge that the majority of people at the meeting wanted the memorial restored.

The 60+ year old, community-run Napier Skating Club were left out of pocket, out of a home and out in the cold when their ‘SK8 Zone’ skating rink on Marine Parade was demolished ahead of a new, council-constructed ‘Bay Skate’ facility opening on the former Marineland site.

NCC’s chieftain, Wayne Jack, was quoted as saying: “We will definitely need [the skating club’s] input to make it a world-class facility … The club is instrumental to [Bay Skate’s] success”, giving a clear indication that Napier Skating Club would have some form of involvement with the development, if not the operation, of the new facility.

But when NCC declared “a series of ongoing and serious issues” within the skating club had been revealed (but not to the public), it decided it would be best if the new skate park was managed by the council, as Napier Skating Club, despite 61 years of operation, did not have the “operational expertise” to do so.

The cyclical appearance of council press releases trying to justify the ratepayer-funded construction of a velodrome virtually no Napier ratepayer wanted or needed only aided in adding to the growing peloton of public discontent.

Something in the water

This year Napier’s ratepayers found themselves out of pocket and out of pure drinking water.

Napier’s normally pure water supply was chlorinated in February and again in May this year after returning positive tests for E. coli. In light of the Havelock North water crisis, and to ensure all waterborne bugs were killed off, the council chose to chlorinate the whole system for “up to a month”.

In July, however, NCC’s chieftain declared the city’s water infrastructure was no longer “up to scratch” under new standards, and chlorination would continue for at least three more months while remedial work was also carried out.

Napier’s drinking water woes were influential in pushing annual rates up another 4.9% to help cover things that never used to be a problem.

Meanwhile, those Napier residents unable or unwilling to drink chlorinated water have been buying their drinking water in bottles. Where does much of this bottled drinking water come from? “Pure artesian aquifer” Hawke’s Bay bottling plants, of course!

E. coli levels and water infrastructure also became a problem in Napier’s Ahuriri Estuary in April after significant rainfall overwhelmed the city’s wastewater system and forced the council to release sewerage into the nature reserve.

Too much water, or rather an inability to drain it from Napier’s sporting crown jewel, McLean Park, muddied the city’s reputation in February with the farcical abandonment of a Chappell-Hadlee oneday cricket international, and subsequent loss of matches against South Africa and Pakistan – a major loss for sporting fans and local businesses alike.

In March it was revealed NCC was looking at selling o its CBD headquarters site to multi-million-dollar hotel developers.

The sale of the site would cover the cost of the council’s operations hub moving into the neighbouring Public Library building and the library would likely somehow be squeezed into a much smaller space amidst Clive Square and yet more war memorials – Napier’s Women’s Rest building and the city’s cenotaph.

Despite only being in the “early stages” of planning in March, a feasibility study had already been conducted and managers sent on research trips, meaning a fair bit of time, thought and money had already been invested in the process.

Not surprisingly, many viewed as slightly more than auspicious a councilcommissioned report revealing soon after that NCC’s offices and library were now dangerously earthquake-prone.

The report also meant the move was to be far earlier than planned and the cost now covered by Napier ratepayers, rather than real estate deals.

While the need to relocate sta to safer accommodation was understandable, recent events also pressed the importance of public transparency upon some councillors, who voiced caution in not rushing ahead with moving plans at a NCC finance committee meeting on 2 August.

But that sentiment was quickly quashed in the public-excluded section of that same meeting. After which Napier’s mayor decreed councillors “had not left the matter on the table, but had agreed to all recommendations”, including providing the chief executive with up to $1 million for fitting out alternative, temporary facilities and some other details not provided to the press/public.

In other words, once again a public interest matter involving public servants and public safety in public buildings, where the cost is publicly funded, was decided and signed o in yet another public-excluded meeting!

Change at the top

Amidst all this recent public discontent, lack of transparency, crumbling infrastructure, erroneous council decisions, and frustrated complaints to the Auditor-General, there is a spot of democratic light at the end of the tunnel.

An opportunity for true, public, democratic change comes this September when city councillors get to vote on whether to continue current chief executive Wayne Jack’s contract for another five years, or head in a different direction.

NCC advertised the CEO position recently, but Mayor Dalton described it as merely a formality required by the Local Government Act.

Comments Dalton made in his “Disgusted” email may have stymied this process, however.

Employed as a ‘change manager’ in 2013, NCC certainly has seen changes under Jack’s rule. Some have been received positively, but more recently many have not.

Those supporting the current administration dismiss criticism of the Jack-Dalton regime as “anti-change”.

Given the trail of errors, bad publicity, and ill feeling amongst ratepayers and restructured council sta towards their elected councillors and unelected council management over Jack’s past term, it might be more accurate to say that critics just prefer “change for the better”.

Andrew Frame is a 40-year-old husband, father, life-long Napier resident. He writes the www.napierinframe.co.nz website and promotes all things HB on social media.