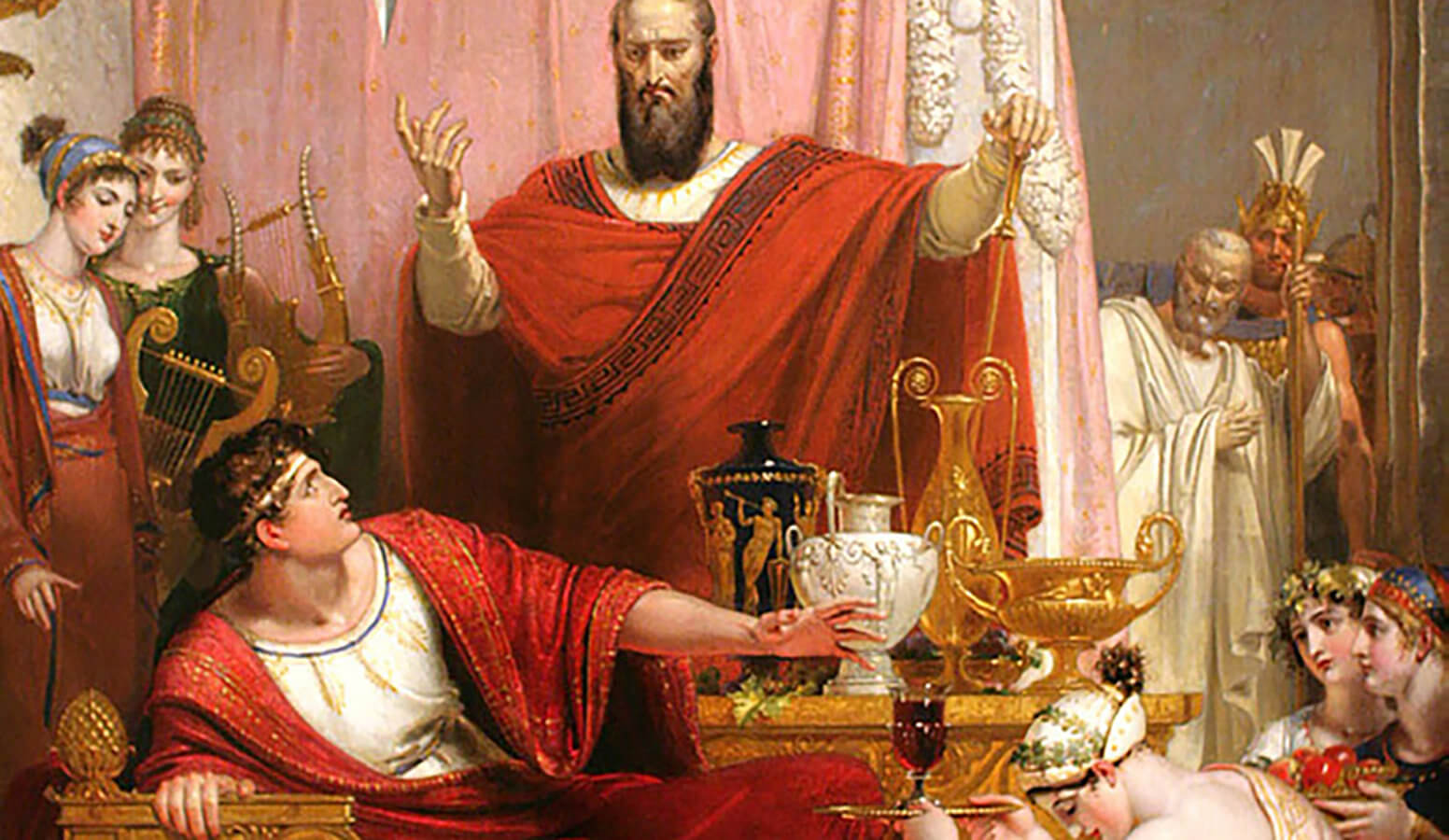 Where the Buck Stops

THE SWORD OF DAMOCLES is one of the most enduring images from antiquity. Damocles, you may recall, was a courtier in the service of his king, Dionysius II of Syracuse. Syracuse remains a pretty little town in the southeast of Sicily.

Damocles was apparently flattering his king, which is a smart move when your boss is a brutal tyrant. He declared how fortunate his king was to be a man of such power and magnificence. Dionysius offered to swap places and the surprised Damocles gleefully accepted.

But while Damocles, reclining on a golden couch, was being treated to an opulent feast, he noticed a large sword hanging above him, suspended by a single horse hair. He begged the king to be excused, the lesson being that power and fortune are accompanied by great peril. The rich and powerful have so much to lose and almost nothing more to gain. In some respects, it’s better to be in the lower ranks where there is less to lose and so much more to aspire to.

As Cicero put it: “There can be no happiness for one who is under constant apprehensions.”

It is curious to note that almost nothing but this incident is known of Damocles, and Dionysius the king is remembered as a short-term and unpopular ruler whose performance was somewhere between mediocre and incompetent.

Only this seemingly frivolous moment endures and it does so because it so brilliantly encapsulates what it’s like at the top. You get to sit on the throne and to make the decisions, but from the start you know your reign is temporary and based on your performance. One wrong move and you could be gone.

Recently we’ve seen the demise of Fletcher Building’s CEO, Mark Adamson, for the poor performance of their business and interiors division. Adamson seems to have sought to place blame on management in that division who he described in an email as ‘a bunch of old farts’. The board, quite probably also full of old farts, weren’t about to let him pass the buck and he was gone by lunchtime. Expect a shake up of the board as well. If you’re in the business of making money in building, and it’s a building boom, shareholders expect a decent performance. That’s particularly so if you’re earning Mr Adamson’s $2M base salary.

The private sector mostly get these things right, albeit they are accompanied by nauseating spin. ‘The CEO has left for personal reasons’ or ‘He’s decided to pursue other opportunities’. Nah, he got sacked, plain and simple.

In a disaster, the ordinary person might escape on a lifeboat, while the captain goes down with his ship. The example of this most commonly recalled is that of Captain Edward Smith on the bridge of the Titanic as it went down. History may have romanticised the story but it stands in stark contrast to more recent sinkings.

This principle isn’t just some dreamy anachronism, but is laid out in the likes of aircraft law where it’s stipulated that the captain has ‘final authority and responsibility’. I think they have that the wrong way around. Great leadership starts with responsibility; authority or power come second.

One of the foibles of modernity is the putting aside of principles that have served us well for thousands of years. Examples are not hard to find. You’ll remember the Costa Concordia where the captain abandoned ship while 32 of his passengers perished. More recently a Korean ferry sank without the order to abandon ship ever being given and none of the life rafts deployed. You guessed it, the captain and most of the crew escaped while 304 passengers perished.

In the modern era self-preservation takes precedence. We live in an age of pre-nuptials, trusts, indemnity clauses and endless other mechanisms to avoid carrying the can. That might work for the ordinary citizen, but still doesn’t cut it at the top.

All this leads me to our current water woes.

Last year’s gastro crisis had 5,500 victims, 45 hospitalisations, and it seems three vulnerable citizens had their lives prematurely ended. Problems were identified perhaps as far back as 1998. Apparently, a plan to address the potential problems was drawn up, but never actioned.

The painfully slow formal inquiry into the matter laid most of the blame on the Hastings District Council, saying that they “failed to embrace and implement the high standard of care for a public drinking-water supplier”. Who has taken responsibility for this debacle?

Some of our leaders have done so in words, but no one has lost their job.

Former Mayor Yule, showing masterful political timing, has shifted to national politics. In any event he was re-elected last year, immediately after the crisis. The public did not find the alternative candidates sufficiently compelling. Yule also fronted very well during the crisis, taking the hard questions from the media at every opportunity. Still, now that more facts have come to light and the formal inquiry has castigated the HDC, he might be in an untenable position if he were still mayor. I’d wager that such soul searching was a key factor in him moving on.

CEO Ross McLeod would seem to be on shakier ground. When your staff perform well, you get the photo opportunities, the ribbon cutting and the champagne, even though you’re only taking credit for the team. When middle management mess up, you get to take the blame for them. Responsibility sits with the chief executive and the mayor. McLeod was also fairly quiet during the crisis, which is no surprise. Elected politicians always hog the limelight, as Yule did in this instance.

Yule claimed the many errors made created a ‘swiss cheese effect’, where lots of holes in lots of places meant no one could really be blamed. Maybe, but it’s not about blame, it’s about taking responsibility. The councillors in turn, have said something like ‘the best thing we can do now is fix the problem’. That’s not good enough. It’s restorative justice for fat cats. The CEO should have gone and gone a while back.

Now I’ve got nothing against these people. Yule is a capable and canny politician and McLeod is apparently a highly intelligent operator. You don’t get to the top without having some genuine ability. Sometimes the jettisoning of leaders is just bad luck on their account. They have my sympathies, but not my ongoing support.

The actions of councillors in sticking with the same team are intolerably weak. Instead of taking decisive action they’ve just extended the CEO’s contract and given him a 2% pay rise. That’s about what you’d expect for a solid performance, but is sickening when you hear of the ongoing suffering the gastro crisis caused for so many.

Not much more can be said for the Napier City Council. They seem to have only just realised that spending $21 million on a velodrome, while their water has a positive E.coli test every other month, isn’t a good idea. Politicians love glamour projects. Anything to do with sports or the arts and they’re out in droves.

Much less appealing are boring infrastructure projects, like water supplies or flood protection schemes. Edgecombe provides us with another example of this, where recent flooding seems to have been the result of failing to maintain the stop banks. Such matters are uninspiring but essential responsibilities of councils.

Leaders perform best when they understand these principles and have more skin in the game than those below them. Their sacking is not about justice and it’s not about fi xing the problem. It’s seldom the person at the top who actually made the bad calls, but someone down the ranks. 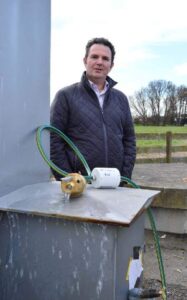 But it’s the chairman, the president, the chief executive that bears the responsibility. Their departure serves two purposes:

Firstly, a new face comes to power and says all the right things about ‘it won’t happen on my watch’. This goes some way towards restoring public confidence, which has been horribly shaken.

Secondly, and most importantly, it shows that the former leader was accountable and took responsibility. The Sword of Damocles isn’t just symbol of potential peril. The sword must actually fall from time to time and blood must flow.

In doing so, it sends a clear message to any new leader of a council and aspiring leaders too. The buck stops with you.