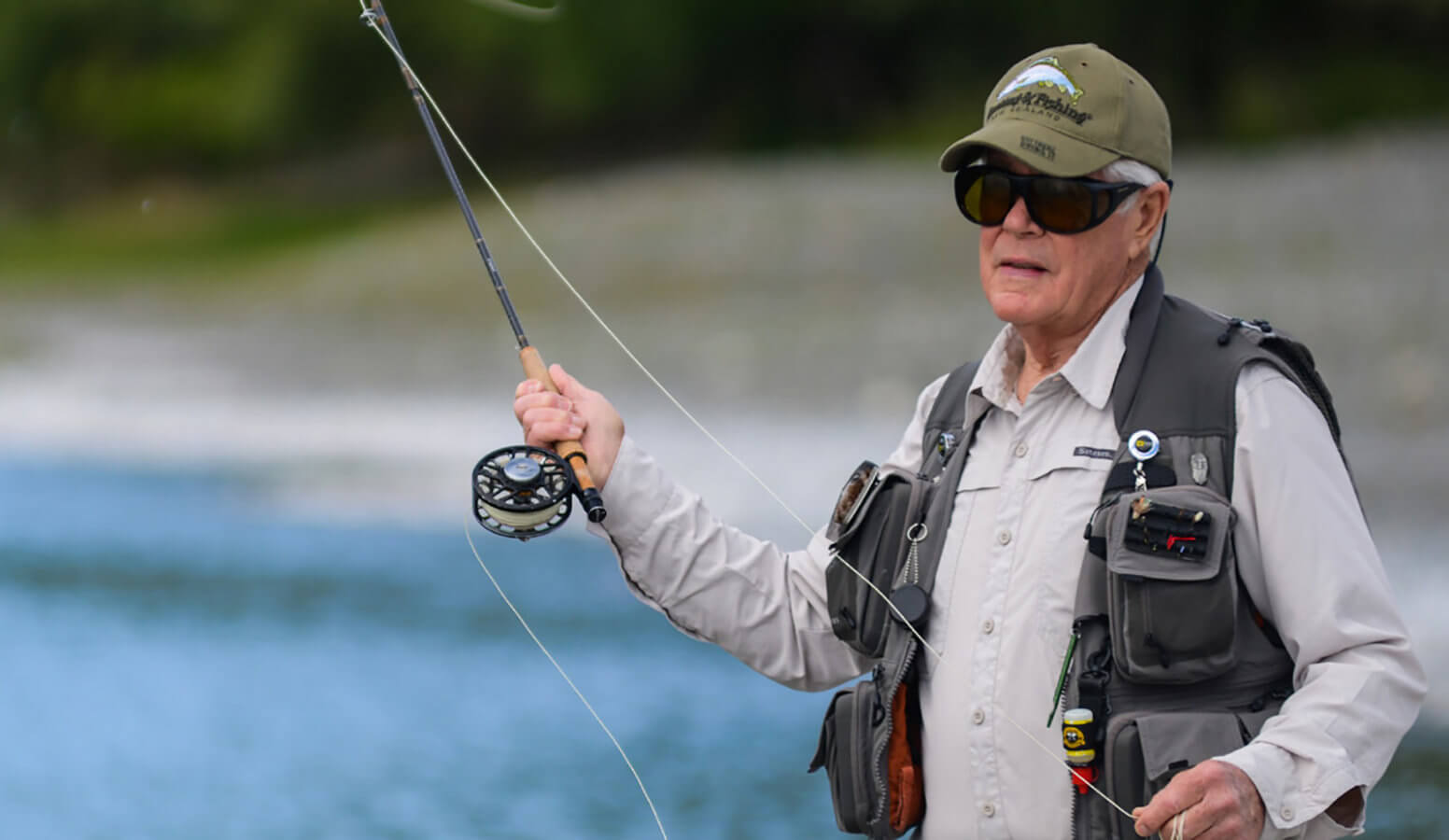 John Scott: Come Fly With Me

Local trout fishing, fly tying, and environmental legend John Scott says Hawke’s Bay is very spoilt for choice with its myriad of rivers and fishing spots and a relatively low number of anglers.

And he’s worked hard to ensure this continues on for future generations.

One of John’s earliest trout fishing memories was with his father on the Tongariro River in the 1950s. Trout were hooked and, as they say, so was he.

But while being a keen angler like his father, family and work took precedence over angling for John too, and it wasn’t until having to give up work at 47 that he was able to fish more extensively.

Since then he has certainly made up for lost time.

Something in the water

At 73, despite all those years of angling experience, John says he’s still learning.

He says skill makes up a big part of trout fishing – being able to ‘read the water’, knowing what sort of waterway it is, the size and type of lure required, and how and where to cast the fly so it will float naturally into your target’s attention.

Often you won’t even see the fish. “You’re not always looking for ‘trout’, rather a smudge, movement, or a discolouration in the water,” says John.

“You have to learn the seasonal changes in rivers – where trout migrate from and to.

“Eighty percent of the fish live in 20% of the river and you have to learn why.”

John illustrates this, explaining that in the height of summer the Tukituki River has areas of “high recharge” – where cold water comes into the river from streams, springs and tributaries –trout love these areas and knowing where these recharge points are can make the angler’s task easier.

John says trout are also very picky eaters and the range of environments that exist across Hawke’s Bay’s many fishing spots can make life hard for an angler.

“Trout know exactly how much and what sort of food there is in their river and how much they need to eat, making fooling them into taking a lure even harder,” he says.

“The trick is in replicating the trigger that makes the trout take the fly.”

Come fly with me

The most potent weapon in any angler’s arsenal is the fly – that little lure that resembles an insect or some other form of natural fishy food.

He can make a standard ‘nymph’ in as little as two minutes – that’s up to 120 per day if he’s feeling industrious, and as a result he has amassed quite a collection.

The work that goes into fly tying can be very technical and intricate. Using multiple techniques and up to eight different materials for a single fly, he can recreate fluffy or winged insects that have fallen into the water, or a tiny lure with a holographic glint to imitate a larva rising from under a rock, supported by its own air bubble.

John has taught a lot of youngsters how to tie flies through the local anglers’ club and at Lindisfarne College.

He says his passion for fly tying comes from starting with nothing but a hook and ending up with something realistic enough to convince a trout to take that fateful bite.

John enjoys tying flies and giving them away – often to fellow anglers he meets on the river, taking satisfaction in knowing they will get enjoyment from using those flies to catch fish.

He made some lures for a local guide who liked them and the guide asked John to help out, which he did for three years.

John doesn’t consider his guiding to be ‘work’ – he enjoys interacting with people and a number of those he has guided have become good friends, as evidenced by these comments BayBuzz ‘hooked’ from one of his close fishing mates, Dick Bradshaw:

“John Scott is one amazing fellow, the most knowledgeable fisherman I have met. More important is his willingness to share his experiences. He enjoys watching other people catching fish as much as catching them himself. And when not fishing, John is working hard to resolve the conservation issues of the Bay.”

New Zealand has become a very popular destination with overseas anglers thanks to glossy magazine articles and YouTube videos singing our praises across the globe. It’s not unusual for a local angler to wander down to their usual fishing spot, only to find a guide and two to three clients already there.

While not such an issue in Hawke’s Bay with a relatively lower number of anglers, John thinks Fish and Game NZ need to find a way to manage this influx into the future.

The overseas anglers John has guided seemed far more sympathetic to the environment than New Zealanders – having seen the deterioration of waterways in their North American and European homelands.

And as our interview continued, John too focussed less on the fishing and more on the environment.

“You don’t have to catch a fish to enjoy the surrounding environment, but if you do it’s a plus.”

Over the years, John has noted a growing degradation of the local waterways.

“Most New Zealand males, at some stage in their lives, participate in a ball sport that requires a quality playing surface that’s looked after – rugby, golf, soccer etc.

“I noticed that rivers and streams were the same and needed to be looked after just as much to reach their optimum conditions. If you were playing golf and someone let cows or diggers or cars drive all over the fairway and greens you’d be really annoyed – it’s the same with waterways!”

John was influential in the creation and running of the Maraetotara Tree Trust in 2002 to help restore the Maraetotara River, which flows from inland of Waimarama to the sea at Te Awanga.

Working with Hawke’s Bay Regional Council and local land owners the trust focussed on fencing the river off from stock, removing the riverside willows and replacing them with native trees and plants.

A big part of the process was getting the local land owners on board and, once they were involved, they became very proud of the result.

John has gone on to be involved with seven groups protecting Hawke’s Bay rivers and he has received four environmental awards, including the Ministry for the Environment’s Green Ribbon Award in 2004.

“All anglers have responsibilities to hand over rivers in a better condition than they found them to the next generation,” he says.