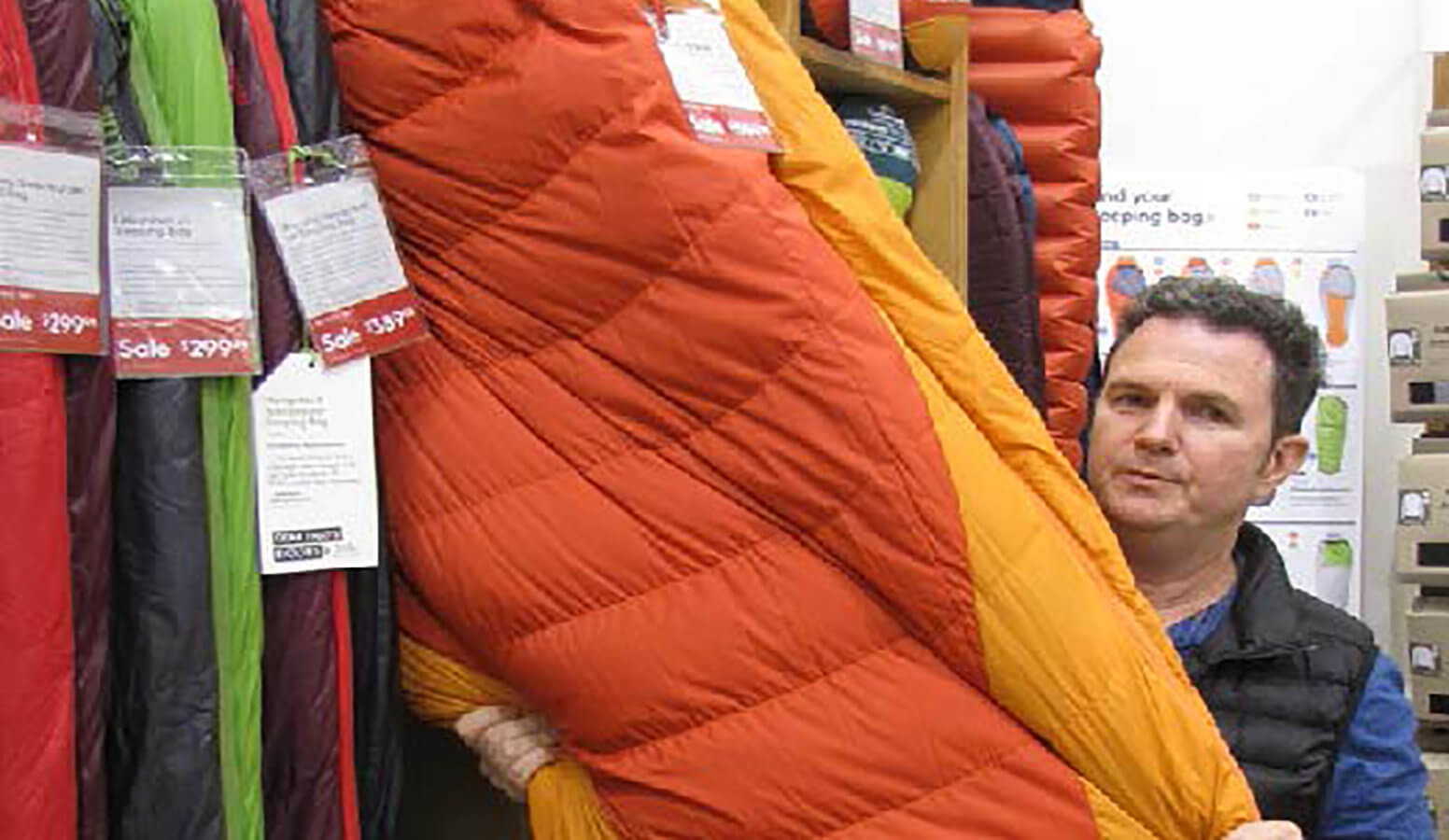 Heaps of Kiwis, especially in Hawke’s Bay, are zealous campers. 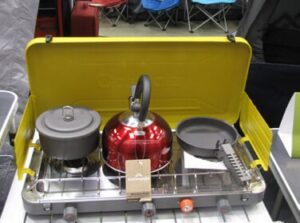 However, to Paul Paynter, ‘roughing it’ means staying in a mere ‘3-Star hotel with a hot tub’. In his youth, camping consisted of an occasional sleep on the beach, and even at that more adventurous age he found the toilet blocks ‘feral’.

Nevertheless, confronted by the reality that his youngsters (age five and eight) are clamouring to sleep in the wilderness – “they want to be camouflaged outdoor weekend commandos” – Paul decided to browse the camping essentials at Kathmandu, accompanied by BayBuzz.

Ever the cynic, Paul at the outset claimed that camping meant something different in ‘his day’, when it involved minimum equipment – “a tin can to cook in, not a five-piece enameled pot set” – and a genuine desire to tune out the world and get close to nature. In contrast, today’s ‘camping’ includes solar panels to keep those mobiles and iPads alive and freeze-dried packets of Coq au Vin and Apricot Crumble to dine upon.

But as his shopping tour continued, he came to admire the ingenuity that went into many of the camping accessories on offer. And he admitted that “as he got older, the ground got harder”, making him appreciate luxuries like air mattresses.

First stop was finding a tent. Commanding the Kathmandu camping section was the Retreat 280 Module Tent, sleeping five, normally priced at $1,199, but like most items in the store significantly discounted (to $679 in this case).

Paul insisted that living in this luxurious abode was really “pretend camping … it probably has a heat pump”. He seemed to define real camping – “in the old days people were tough” – as an activity where all necessary equipment fit in a backpack one actually carries to a suitably serene and isolated location. “You want to test your perception of your own rugged endurance … otherwise just rent a cabin.”

To him, the Retreat 280 required a key accessory … a Land Rover, driven to a campsite with plug-in electricity. And probably carefully packed to the gills by a nanny. More reasonable to Paul was the Retreat 80, sleeping three, listing at $399. While calling it “a bit soft”, he nevertheless took a shine to the $99 collapsible campbed.

Since Paul apparently anticipated hiking to a campsite, carrying all his gear, his attention turned to a suitable knapsack, hiking boots and walking sticks. He loved the fit and support offered by the Interloper gridTECH backpack, with a whopping 70L capacity ($599). It seemed to appeal to his manliness, but was somehow out of sync with the pair of Fizan Compact 4 Walking Poles ($139 each) he warmed up to, which at first glance he had dismissed as sissy stuff … “falling is part of the experience”.

To equip his trek, ankle-supporting boots were the “most important investment”. Paul chose the Salomon X Ultra Mid GTX ($379) boots for their remarkable light weight. However, ever practical, he did pause over other boots he thought more ‘sensible’ in that they were mountain climbing-worthy, but still stylish enough to wear to dinner at the 5-Star lodge as well.

As for suitable clothing, Paul was hard to please. From thermals (“I get hot and they are the first things you want to take off”) to top-of-the line Aysen GORE-TEX jackets ($599), he was reluctant to buy. “These jackets look great for standing on the sidelines at your kids’ freezing cold netball game, but they’re too over the top to want to wear stomping through the mud and the bush.” He also didn’t like the bright ‘Scandinavian’ colours of many of the jackets … “You want to look ‘local’ … wear black and green, muted … don’t want to stand out.” The ‘most critical’ clothing item to Paul was a Pelorus Beanie (‘looks tough’), easily done at $15.

Sustenance was next on the list. Passing on the three-burner stove ($179), the steam-whistle polished chrome tea kettle ($29) and the five-pot cooking set ($119), none of which were deemed backpack capable, Paul chose instead the super lightweight titanium backpack one-burner stove ($139) – “the ultimate in credibility” – and a can of butane ($10). But he couldn’t resist the freeze-dried foods, going for the Honey Soy Chicken … and Spaghetti Bolognaise for the kids ($12.78 each).

The subject of water came up. “You used to be able to look at the water and see it was clear and fit to drink; now you worry about what might be upstream.” 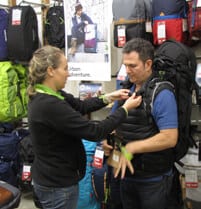 But what to do after dinner, when daylight disappeared?

On offer was a Solar Panel and Battery Charger ($199), which promised to fuel the devices that could connect his family to the outside world. But Paul vehemently resisted the whole concept of taking solar power to his campsite. “Give up the phone for a couple of days.”

Instead he opted for a straightforward Camp Lantern ($149) and for his two kids, 400 Lumen Raven Head Lanterns ($199) to illuminate those nighttime toilet trips.

But with all lights out, it’s time to crawl into those cosy goosedown sleeping bags. Top-of-the-range at Kathmandu is the XT Polaris Bag ($999) in sunset orange, guaranteed to maintain its insulation even when wet and protecting the sleeper down to -16C temperatures. In the case of sleeping bags, unlike jackets, he would opt for a bright colour – “it’s easier to find your own bag”. 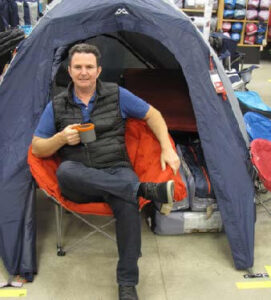 A concerned and vigilant Paul grilled the store manager, Danelle Gove, on how the goosedown was sourced. To his satisfaction (“marginally better for the ducks”), she vouched for Kathmandu’s adherence to the Responsible Down Standard, which focuses on animal welfare (e.g. no live plucking, no force feeding).

Outfitting Paul cost $3,813, although BayBuzz did throw in that jacket he didn’t really want. Adding backpacks, boots, head lanterns, some meals and sleeping bags for another three family members would bring the total to $10,437, although skinflint Paul probably wouldn’t ‘spend’ as much on the kids! And of course, Paul would take advantage of those Kathmandu discounts.

By the time Paul’s browsing was completed, BayBuzz thought he was warming slightly to the concept of a family camping trip … or at least an outing to enjoy “the cool stuff … we never grow up”.

[Editor’s note: All prices noted are full list; most items could be purchased at substantial discount at the time of Paul’s shopping trip.]