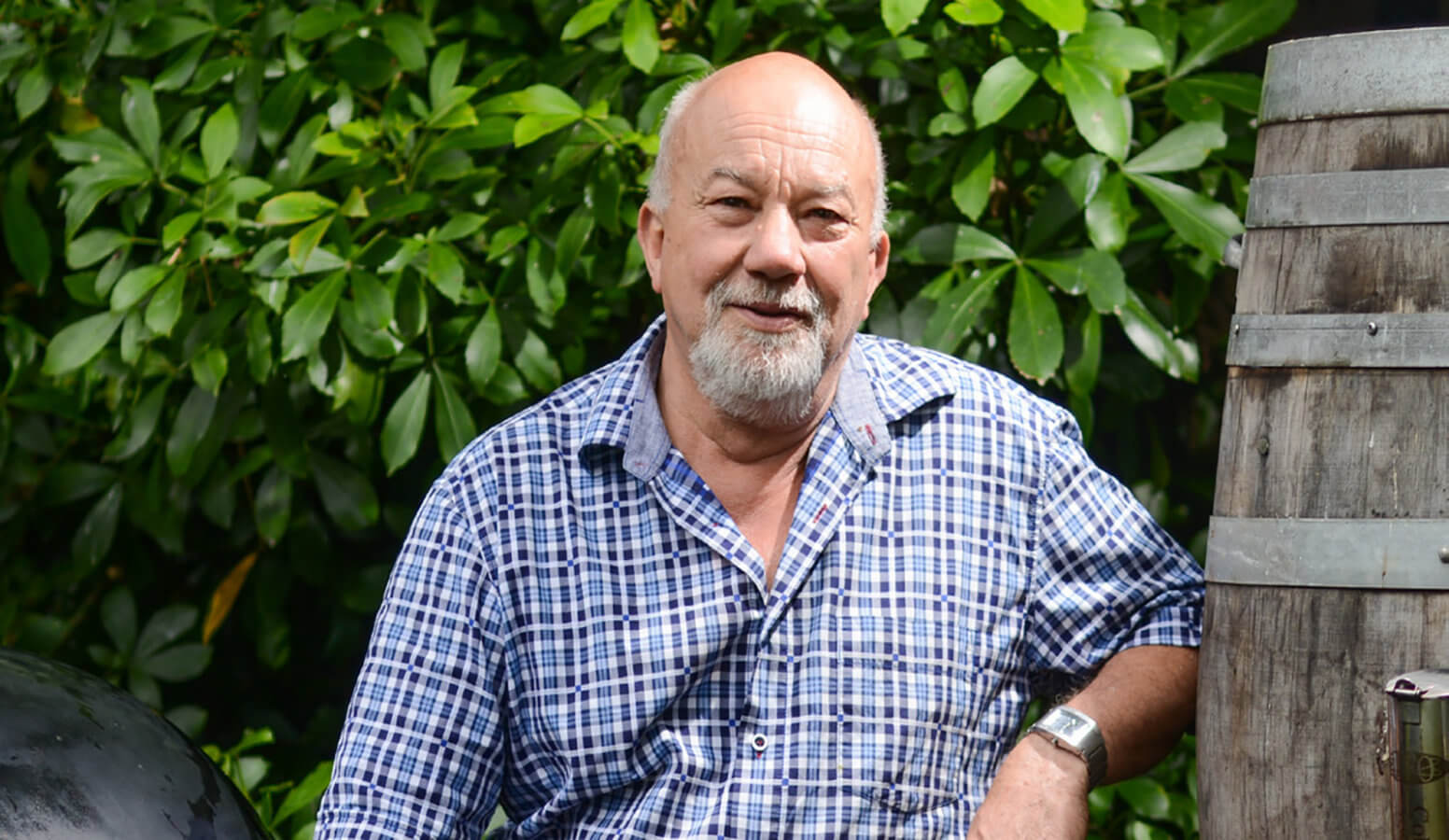 Summer’s (non)burning question – what is the best way to barbeque? We grill the Bay’s expert – Raymond von Rijk – for his tips on how to get the best food, flavour and flames without burnt fingers.

In his homeland the Netherlands, Raymond chose hospitality as his career path. A profession that pretty well demands the word ‘travel’ rubber stamped onto a CV. And he is no exception.

A graduate of the Maastricht School of Hotel Management, he lived in Indonesia and France before choosing New Zealand some 30 years ago, spending three and a half years in Auckland before discovering Vidals in 1981.

A subsequent stint at the Wellington Country Club where he was travelling back and forth between two cities gave room for pause. “I had four children and my wife was not well … the time came to concentrate on being in one spot.” That was 17 years ago.

“I became interested in barbequing, which was relatively primitive at the time. I did a lot of research and found the only other person doing a course in it was Ruth Pretty. And hers were not that regular.”

He hasn’t looked back.

His courses on the art of getting the best from your BBQ are legend. “I wasn’t interested in just following the recipe. I wanted to share my years of grilling and spit-roasting – how to bone a leg of lamb or chicken, appreciate herbs and spices, discover smell and taste through practical lessons. I worked with the producers – meat, fish, poultry – travelled the country to learn.

“Then I went overseas to Holland, the UK, Iceland. They have great BBQ techniques even though most of the food is imported. And America of course. Most agree that the BBQ did originate here so the American barbie comes by its reputation as being the best honestly. I became heavily involved in developing new techniques – spit roasting on grape wood, Asado style in Argentina (considered to be cooking in its purest form), and the South American style of smoking, which is amazing to see and easy to do. Mothers, fathers, wives, daughters, sons all learn at an early age.”

Subsequently he began teaching … “Special techniques, showing how to really cook from the heart, not just follow a recipe, so people have confidence in their own abilities. I teach how to taste, smell, and provide assurance in knowing how to perfect the art so students will then experiment.” The courses are disciplined, structured and specific … and immensely popular.

But Raymond also has other offshoots to his BBQ Gourmet business.

“I do a lot of catering. Can be up to 1,400 people for a Corporate ‘do’. And for that you need a good team. Not only the chefs but it’s the planning; things like plumbing, accounting – all the practical parts which go to producing a great night out and about which most observers have not a clue considering the need. Specially as there is a very limited time to feed everyone. Doing 18 rib eyes at once for instance! Cooking on a spit, charcoal or wood is a real show as well, because it’s all outdoors. That’s the point of difference in BBQ as opposed to straight catering.”

His hungry audience can be anything from a conference consisting of 200 cattle breeders to a classroom of home cooks. Their commonality? A guaranteed highly critical crowd.

With 80% of BBQ Gourmet devoted to catering, Raymond covers the gamut from weddings, conferences and functions, to parties and events, but his preference is for a smaller group of around 60. He has favourite suppliers of meat, fish and poultry on whom he relies for the very best cuts and catch (an essential when it comes to firing up the barbie). He says the secret is being well organised and having a plan.

“After all, most occasions we are producing barbeque banquets way out in the wilds, in tents pegged down in paddocks out in the open air. My style of catering doesn’t need an army of chefs.

Everything is prepared in advance. It’s the cooking which is crucial.” His own preference is for a medium rare meat, joking that he converts many palates from the tried and true ‘well done’ with his techniques.

Surprisingly his wife Kirsty does all the cooking at home. “She’s a high school teacher and does it for relaxation. Mind you, she doesn’t touch anything related to BBQ,” he chuckles. She is also an integral part of his team of enthusiastic chefs and food specialists who teach, work in product development, test and devise new equipment. A team that loves to get out of the kitchen yet still indulge their love of cookery.

His business mainly comes through word of mouth. And his courses can be anything from a single three-hour elementary covering the basics to a solid three hours per week over five weeks, (or the five weeks’ worth condensed into one intensiveweekend!) including Advanced Classes in understanding temperatures. He covers the country, goes to schools, and is booked frequently by corporates. Future plans for expansion include overseas.

With such a wealth of experience, obviously Raymond has a biblical store of helpful hints on how to be the best when it comes to barbequing. Here he shares a few.

• The first thing to understand is once the BBQ is fired up you can’t leave it … even for a minute.

•You must have a plan. Be organised.

• Don’t try to impress with six different things. It doesn’t work. Getting the timing and heat right for an assortment of burgers, sausages, chicken thighs, and lamb chops would be a tough job for a highly skilled chef, let alone backyard BBQ kings.

• Grow rosemary and use stalks as a brush for basting.

• Position the BBQ so you can see everyone around you – it’s more fun.

• Know your rubs – they make a huge difference to flavour. (Raymond has a full product line up he has developed himself.) Aniseed and nutmeg are great on pork. Use them on fish, poultry, prawns, squid, mussels.

• Most Kiwis and Aussies think everything has to sizzle – not so … not everything needs to be cooked red hot.

• Know your products. What is quality meat? Often companies will dump in the local supermarkets. Select your butcher. Fortunately thanks to recent magazine and newspapers focus on good food, people are far more aware. Even the supermarkets. For instance, Progressive Enterprises won’t sell anything over 21 days old.

• Chicken too. It’s the most highly consumed meat on the market. Thirty-nine kilos per person per year. Be wary of this area being too industrialised. In the Netherlands, for instance, there are four grades of chicken. My mother would never buy a cheap chook. The same goes for pork.

• Know what temperatures do to meat. If you understand this then you automatically know what the BBQ can deliver – whether from a high heat or a slow heat on a coal or gas burner.

• Know when to use a lid as an oven. It’s amazing what a BBQ can deliver.

• Don’t rely on mates’ time keeping – it will never happen. Get specialists who are concentrating solely on cooking.

• Watch out for changes – colour, texture and flavour. It’s a combo of temperature and time.

• Experiment – you are going to make mistakes, so try not to when entertaining guests. Practise on the family and reliable friends with good taste buds.

• Get the meat or fish out of the fridge a good two to three hours before putting it on the grill. You don’t want it cold on the inside.

• Cleanliness is VITAL. I can guarantee 80% of home BBQs are not cleaned properly.

• Lastly, know your barbeques. And your brands.

Raymond confesses he is a charcoal man. But he owns a variety.

“Gas is very easy – you can just turn it on and off. Whereas charcoal requires a lot more tending. But it’s what I favour for guests. The range is wide and varied and a cheap BBQ isn’t necessarily the worst. But generally Weber are the most reliable. Of course the XXL Big Green Egg (a charcoal BBQ) is the ultimate if you are an avid BBQ fan. Eighty percent are made in China, but the Weber is made in the US and Broil King is also good, made in Canada. Small Webers are perfect for small properties.”

Good advice from New Zealand’s BBQ King. For more and some of Raymond’s tried and true BBQ recipes go to: bbqgourmet.co.nz/recipes