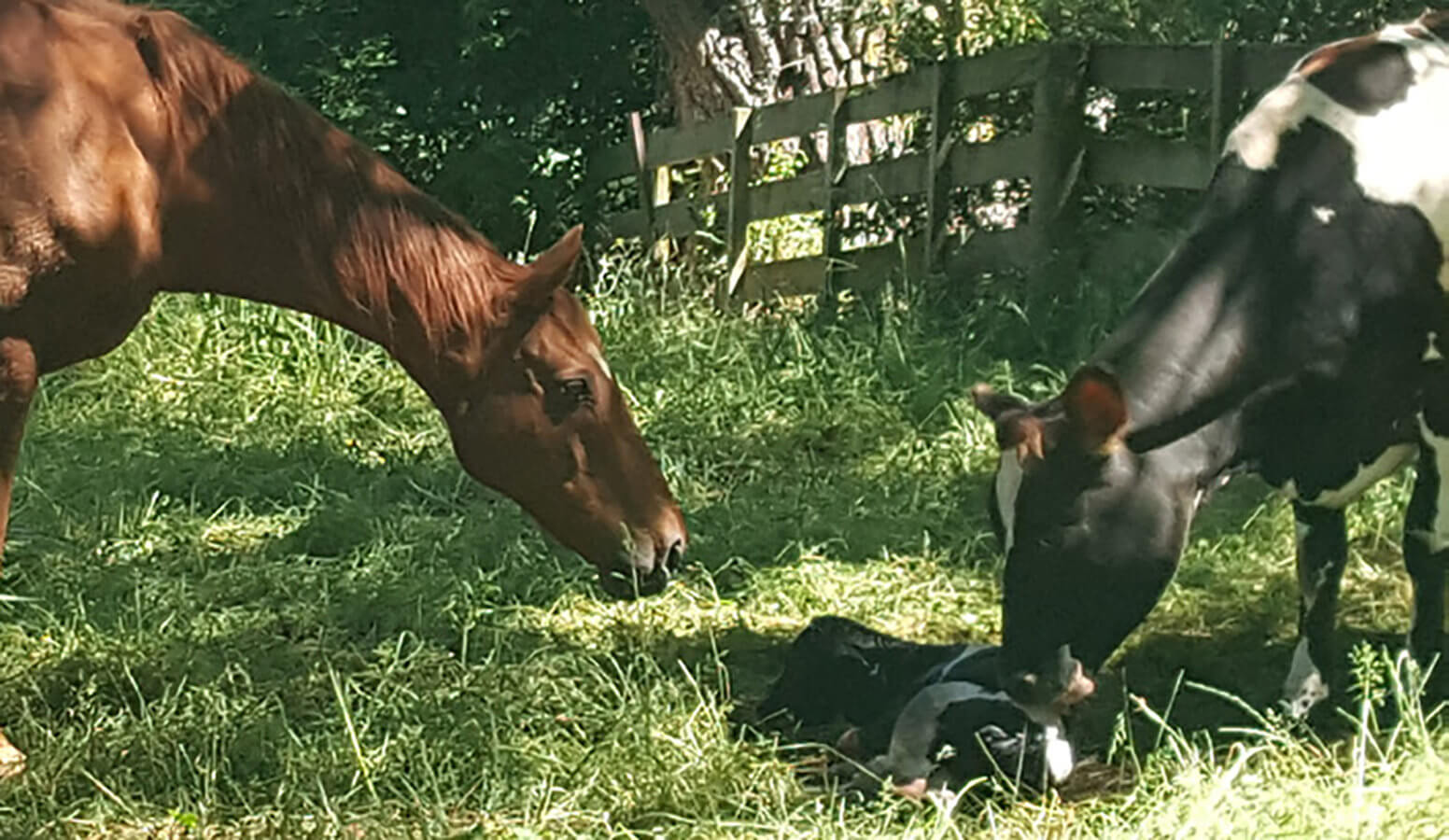 My heart is buried in these Central Hawke’s Bay hills.

Like a Rita Angus painting, dusk shadow settles in the cracks where the rolling crevice meets. If you catch it right, as you turn into the Te Hauke straight, an involuntary gasp will meet a great orange ball blocking all but sky edges. Seasons pass green to purple.

Thirty years I have made the turn into our road and for 30 years, without fail, my heart fills. Home, my Tūrangawaewae, the place where I stand. Thirty years, not yet a local, but it is where my bones will lie.

Oh dear, before I crash headlong into a bucket of nostalgia let me introduce you to a cow.

Lisa is 15 years old and is a friend of mine. When she was 12 years old a brown and white spotted, four-day-old rejected calf came to live with her. The family called her MooMoo. MooMoo lived in a paddock next to their house and for three years she was fed plum tree leaves and love. She was cuddled, cajoled and ridden by very little people. MooMoo befriended the solitary sheep and tolerated the chooks and ducks. She kept a vigilant eye on the gate in case any of her humans should make the mistake that would let her into the garden of infinite and delicious possibilities.

Although MooMoo never had a cow friend to call her own, there was one night when it would appear that MooMoo attracted the attentions of a fence-jumping bovine lothario.

One day disaster struck. The family was on the move; there was no room at the new inn for a batty beasty. Clocks ticked as Lisa told me of MooMoo’s impending mince and cheese fate. The Sword of Damocles rattled with somber glee.

Well, we couldn’t have that. Money was exchanged, promises made and  MooMoo came to live at Te Rangi Farm. Our cows were furious. Black cow raged, she bellowed the bellow of an angry bull; she pawed at the ground sending swathes of dust into the air. Her anger remained unabated; such was her state of mind that she missed the hamburger baton passing her way.

So MooMoo stayed in the home paddock with Beau and Nick the Pony. MooMoo was in love. Shoulder to shoulder she stayed with her surprised new friends. Disdainful looks from Beau and the odd ear flattening made no dent in MooMoo’s infatuation. Where they lay, she lay; where they drank, she drank; where they wandered, she wandered. Beau and Nick the Pony, gentlemen of leisure, enjoy a wander to the river, walks along the wooded path, visits to the garden and world peace. With forced goodwill they have accepted that MooMoo is an inevitable addition to these sojourns… an unusual sight, keeps the neighbours on their good-natured toes.

As the weeks went by it was increasingly obvious that MooMoo had had a fruitful liaison with that long ago caller, and two days ago Janelle watched as a little spotted, black and white calf was born. Michael named her Moo2.

Beau and Nick the Pony stood vigilant guard throughout, never leaving her side. Not a blade of grass passed their lips. As Moo2 lay exhausted on the ground and MooMoo licked, fussed and nuzzled her miracle, the two horses tiptoed up to pay their gentle respect. Word spread and a human semi-circle formed adding their praise to this odd cow and her beautiful calf.

Lisa will come and see her friend and we will love her, but now for the first time she has a family all of her own. At last she can look into big black eyes and see herself reflected back. Yay, MooMoo. We promise not to eat you or your baby.

I hope this Hawke’s Bay summer is treating you well and you can find respite from the hot summer sun. For us it’s family, music, stories and trying to keep the garden alive. I hope, before we meet again, that MooMoo has learned to share her milk, that I have learned how to make butter, and I am busy spinning milk into gold.