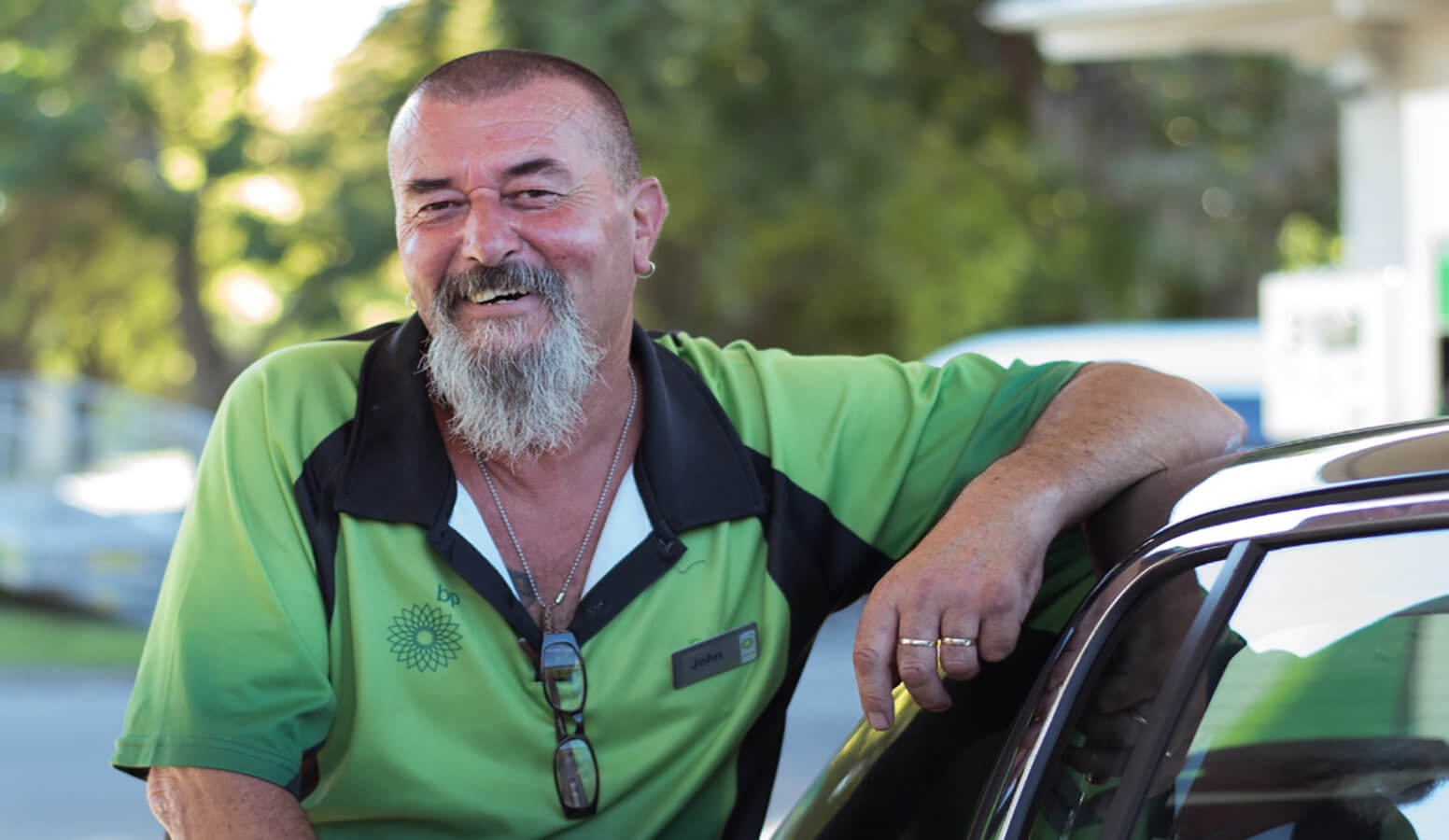 Many know John Round as the enthusiastic, outspoken and politically engaged attendant at BP 2Go Millward Motors in Havelock North. Even if you don’t know his name, if you’ve ever bought petrol there, chances are you’ve encountered John and know who he is. Impossible to ignore, his friendly, positive and straight-up outlook on life precedes him.

Super-informed and finger on the pulse, a street-smart advisor to many local politicians whose tanks and ears he fills! BayBuzz sat him down at home for a chat.

John, Hawke’s Bay born and bred, has been at the service station for ten years. His dad, a mechanic, instilled in John a love for machines. Cars, trains, traction engines, just about anything that goes, John has a fire for.

For John, his work at BP 2Go ticks numerous boxes – his passion for machines; meeting, helping and talking with people from all walks of life; and the opportunity to impart a thought-provoking statement or two upon often unexpecting motorists.

Married to his wife Jo, John has two children and seven grandchildren. However, many more ‘adopted’ family fall under the protective wings of John and Jo. 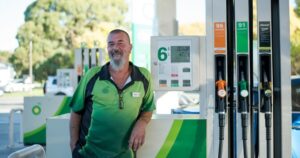 Q: You were born in Hawke’s Bay and haven’t really left. What’s so special about Hawke’s Bay?

A: I left for about a year when I was around 20, kiwi fruit picking in Te Puke, packhouse work and drove a few trucks. But I always headed back to Hawke’s Bay. When I met Jo in 1981 we had to decide between Hawke’s Bay or Manawatu. There really wasn’t any contest.

As a little kid I spent endless summers, summers that seemed to go on forever, camping out at Clifton Camp Site. Such great times. I suppose it has a lot to do with the climate. You know us in Hawke’s Bay, we live for spring, summer and autumn. Winter is a necessary evil, something we tolerate.

Even though people go on about us being ‘cut off’ from the rest of New Zealand, I really don’t think it’s a big deal to get anywhere from here. That’s another cool thing about Hawke’s Bay.

I am lucky both my kids have stayed here. But, even if they left there is always a home for them, and they know that. I like to spend heaps of time with them, the grandkids and my friends.

Q: What drives your political appetite?

A: When I was younger my political views leaned more towards the right, but as I aged I became more left wing. I think about my kids and grandkids. When I’m dead and they come to visit my tomb stone I want them to leave flowers, not kick it! We must think about what sort of world we are going to leave behind. We cannot wait any longer, what will Hawke’s Bay look like if we don’t do something about it now!

Q: In your opinion, what are the most pressing issues facing Hawke’s Bay?

If we don’t look after our water we will all die, it’s as simple as that. Water is the new gold. We must protect our drinking water. Stop overusing and polluting our rivers! Just look around the world to see the damage … the Colorado River is a great example! We don’t want to resort to desalination plants. Not only are they costly but the discharge is high in salt and other chemicals which kills the ecosystem it’s dumped into. We will end up back on square one, like in the game Snakes and Ladders, and no one likes to be there.

It’s not just the direct impacts we are having on our planet that worries me, it’s the issue of governance. Some of these ideas they come up with are laughable! Take coastal erosion for example. You cannot defend the coastline against the might of the Pacific Ocean! The only choice is to head for high ground, anything other than this, in my humble view and I am not a geologist, is an exercise in futility.

Q: You’re on a roll, any other examples spring to mind?

A: Yes. The most recent one is the Craggy Range track. I think I may have alienated myself with proponents for and against! I have been asked to sign petitions from both sides. I can’t sign either. I am sceptical about the entire thing. The council and Craggy Range had a moral obligation to notify the people. I don’t care what the ‘rule’ book says. It’s time to put the rule book down and put people first. They didn’t take any time to think how it might impact the community. And look, it’s literally divided the community in half! People who come in for fuel say to me, “John, if they consulted us about everything, nothing would ever get done!” I think bollocks to this! It just causes rifts! We need to talk to each other and find solutions!

Q: What would you do differently if you were a councillor?

A: [John laughs out loud.] Well firstly, I wouldn’t have any friends if I was a councillor!

Seriously, I think most of them do an alright job. But personally, I would put the rule book back on the shelf and talk to the ratepayers. I would find out what they need and what they want. Any projects must be fully justified. Is it necessary? Is it affordable? Is there a better way? If the project includes developers who seek to gain financially, don’t use the public purse and sell it to us with ‘flow on’ benefits!

And I wouldn’t use words like ‘projection’! A projection is just a projection! That doesn’t make it a fact.

I would remind Council that every dollar they spend is not their money. Spend it wisely for the long term good of the people.

I probably wouldn’t change much about the Regional Council. I know Tom Belford gets a fair bit of flack, but that’s because he’s a Yank. Look, I don’t agree with everything he says, but I listen. He’s trying to do something about it. Everybody’s opinion will be based on their own life experience and therefore different. It’s important to hear people out and make an informed decision. We’re all adults here.

I have my worries about how the Hasting District Council chooses to spend money. A few years back they spent a huge amount modifying the front of their building (which personally I don’t think worked all that well) when certain footpaths in Hastings were in a terrible condition, uneven and dangerous. I spoke with a councillor – he will know who he is – and to his credit he got the footpaths sorted out. But, really, their responsibility is to spend money on core infrastructure. And certainly not helping developers with hotels!

Profit should not be the focus. There has been a definite decrease in the number of amenities the council provide for our rate dollar. Back in the day we all used to get a rubbish bag! They need to spend money on core infrastructure and public services like drinking water, rubbish, recycling, footpaths, street lights, etc and public amenities like libraries, sports centres and so on.

Q: How engaged in local issues do you think the general public of Hawke’s Bay are?

A: The turn out for the election says it all. Don’t vote, don’t moan.

Q: What will it take to get more people involved?

A: I don’t know. I don’t think there’s an easy fix. It’s like we have voter apathy. Are they too busy? Not provoked enough? Or, do they think it doesn’t affect them? Our young people don’t follow the news anymore, there’s too much online distraction. I reckon it will take a face-to-face campaign to make any real improvement.

Q: How would you spend a perfect day in Hawke’s Bay?

A: I would like some classic Hawke’s Bay weather, mid to high 20’s with a slight sea breeze. BBQ in the backyard, kicking back, surrounded by my kids, grandkids and my friends. I love getting the family together.

If you have been here for as long as I have you become blasé about what Hawke’s Bay has to offer. Yeah, I could go to Waimarama or walk up Te Mata Peak, but I have done all that before. It’s great for people who have just moved to the Bay or for visitors, but I am very content to just stay at home and enjoy being with my family.

Q: Do you have any advice for the BayBuzz readers?

A: Be sceptical! If you don’t agree with something give it some thought! We are all grown up and should be able to do our own research. Just ask Uncle Google, not Aunty Wiki, she lies.

[John’s wife called out from the kitchen, “I have a personal piece of advice for Tom Belford. Tell him Nanna Jo says, Tommy, come over and have a cuppa with me, and CHILL OUT!”]

A: Wouldn’t it be great if we were all a bit more up front. If you’re an arse, wear a badge that says, ‘I am an arse’ then we all know where we stand.