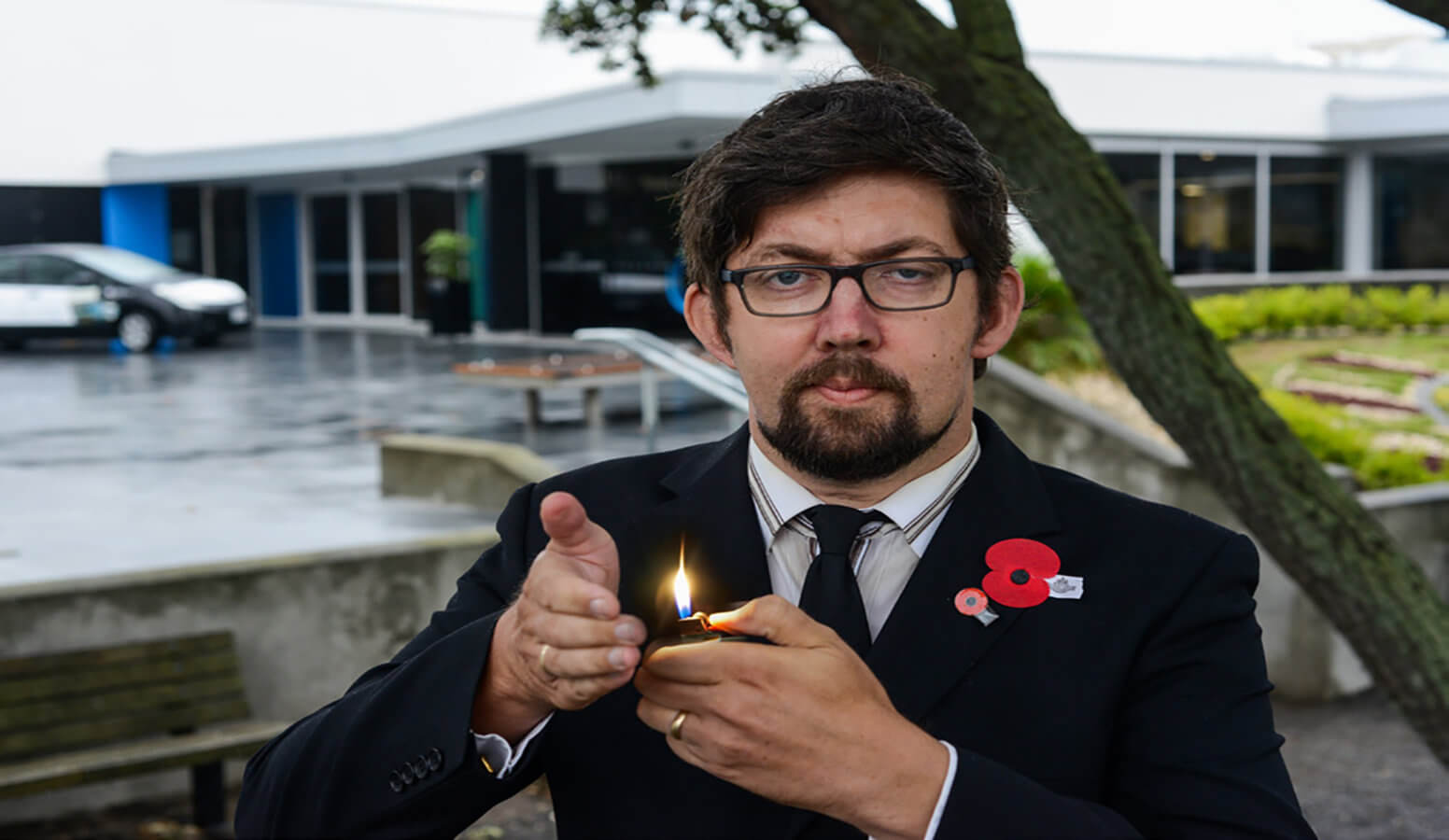 They say ‘truth is the first casualty’ in war.

The same could be said of war memorials.

Concerned citizens have waged a protracted battle with Napier City Council over the future of the city’s (former) War Memorial on Marine Parade and how to honour the past – those immortalised in its Roll of Honour plaques and Eternal Flame.

“I ask you to preserve the sanctity of the building and protect it from vandalism or ill-use. We will ever remember that this is Napier’s Memorial to those men and women who gave their lives [in World War Two].”

The War Memorial’s hall, with its Eternal Flame and marble Roll of Honour plaques, originally displayed on the outside of the building, became a social focal point. Most Napier residents will have attended a function there at some point in the last 60 years.

Napier War Memorial underwent renovations in the early 90s, reopening in 1995 with the Eternal Flame and expanded Roll of Honour (now including First World War, Korea, Vietnam and other modern conflicts) moved inside the entranceway to the newly named ‘War Memorial Centre’. And so it remained for another 20 years.

Until a Napier City Council meeting on April 6, 2016, where a motion was moved, “That the War Memorial feature of the existing War Memorial Conference Centre be relocated to Memorial Square.”

The city’s elected representatives, well-practised in playing ‘follow the leader’, unanimously agreed and the War Memorial was no more.

Napier ratepayers gave no mandate for this. No one had approached their local councillor asking for the change. This was merely a recommendation from council management that our elected councillors swallowed hook, line and sinker.

The Roll of Honour and Eternal Flame were gone – snuffed out in a cloud of renovation dust. A gaseous flame motif persisted, but it wafted above a new, bland, marketing-friendly ‘Napier Conference Centre’ brand.

The Guy Natusch designed memorial, with views of Hawke Bay beyond was built over and boxed in – the facility now looking more like the delivery dock to Briscoes than a memorial dedicated to the city’s fallen.

The condition and whereabouts of the Eternal Flame and Roll of Honour became a big issue in 2017. Public pressure mounted until even the local paper was requesting the council grant access to wherever they might be stored.

The council eventually provided a ‘proof of life’ photo of what they claimed was the Eternal Flame in July, but the gas burner sheltered by a rubbish bin lid in the picture was a far cry from the noble glass, copper and marble mount that had housed it for the last 20 years.

The condition of the 30+ marble and bronze Roll of Honour plaques remained a mystery.

Sentiment was turning against the council. Despite hundreds of online comments, letters and texts to Hawke’s Bay Today to ‘put them back’, returning the Eternal Flame and memorial plaques to the conference centre “was not on the list of options” presented by unelected council management to yet another publicly-excluded council working group.

A public meeting was finally held at Napier’s Century Theatre in August last year. Seen by the public as an opportunity to vent their frustrations over the Memorial changes, it was instead turned by council into a ‘these are your options, pick one’ presentation.

Napier’s mayor said “the simple answer” was the Eternal Flame and Roll of Honour could not return.

To try and ignore the will of the public who elected you, or recent wrongdoings relating to a memorial so intertwined with the expression ‘Lest We Forget’, is inexcusable.

Public pressure started to weigh on Napier’s other councillors, and in September they effectively reversed their initial decision condemning the War Memorial, albeit too late. Returning the War Memorial name to the whole, or part, of the facility was back on the table.

The original Memorial’s architect, Guy Natusch, produced a proposal for the re-housing of the flame and roll features at the War Memorial’s neighbouring Floral Clock site, which received coverage and praise, but so far ‘a proposal’ is all it remains.

For many locals, veterans and family members of the fallen the process is taking too long. For them nothing but the return of the plaques, flame and War Memorial name to their original Marine Parade site will suffice.

On the 25th of April Napier will commemorate another ANZAC Day without its War Memorial on Marine Parade.

In November, at the eleventh hour, on the eleventh day, of the eleventh month we will commemorate the 100th anniversary of The Armistice and the end of World War One.

Hopefully some form of armistice between council and ratepayers will occur by then. More respectful hands are said to have taken over management of the Memorial project within council. And with councillors finally remembering to whom they are answerable, we might start to see evidence of conciliatory, constructive progress at upcoming council meetings.

‘Lest we forget’ indeed.