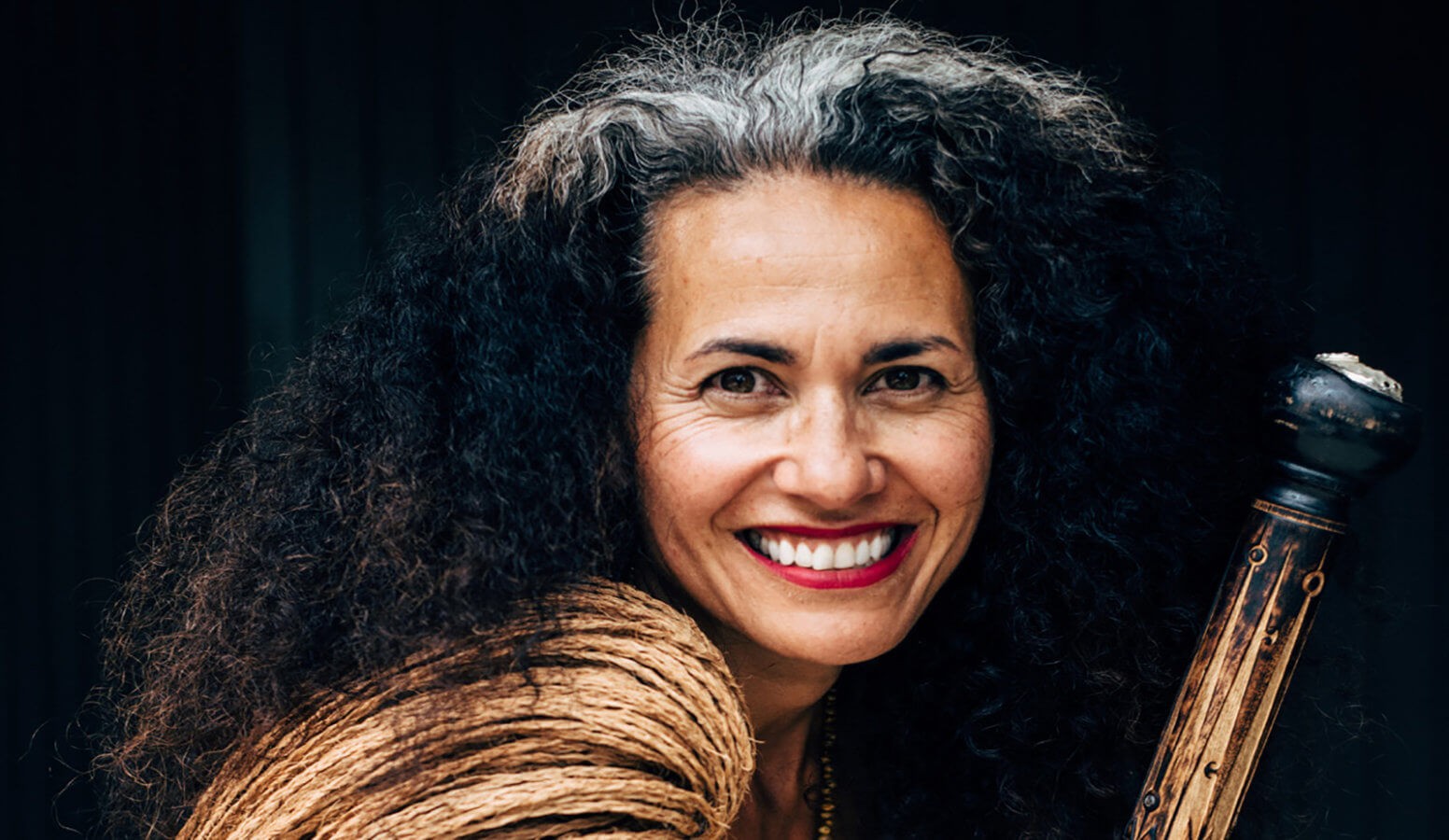 The New Zealand Poet Laureate award is a celebration of New Zealand poetry. At its roots are relationships that connect the world of poetry to a slice of Hawke’s Bay, thanks to over twenty years of commitment from Te Mata Estate, Matahiwi Marae and artist Jacob Scott.

Every two years, a very accomplished poet who can speak on behalf of New Zealand poetry and to its readers is appointed to the role. And during the two-year term, the laureate is supported by the National Library of New Zealand, through the Alexander Turnbull Library, to extend the arm of poetry out into the wider community and to create a new body of work.

Based on Waiheke Island, Selina is of Samoan, Tuvaluan, Scottish and French ancestry. She was the first person of Pacific descent to get a PhD in English from the University of Auckland and is now an associate professor there, where she specialises in Māori and Pacific literary studies and creative writing. 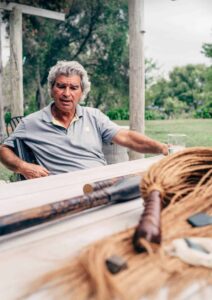 Artist and designer Jacob Scott at home in Haumona.

Spending time in Hawke’s Bay is, Selina says, a joy, and something she’s intent on doing more of during the laureateship. While her appointment came on National Poetry Day, 25 August, the official inauguration events don’t take place until April 2018, right here in Hawke’s Bay. Selina visited in late January, travelling around the region with Marty Smith from the Writers in Wineries Trust (which produces the inauguration events and the Readers & Writers Festival), and staying at a cottage at Te Mata Estate, while getting to know Tom Mulligan from Matahiwi Marae, artist Jacob Scott and John and Toby Buck from Te Mata.

It’s an initiation that all the poets laureate go through in some form or another as they connect with the history and purpose of the award. The New Zealand Poet Laureate is the second stage of an award originally known as the Te Mata Estate Poet Laureate.

The poet laureate award’s life began in 1996, but its history is much longer.

Te Mata Estate is the country’s oldest winery to have been growing grapes on the same site, starting back in the 1890s, with its first licence granted in 1896. In those early days the estate was gifted the name ‘Te Mata’ by Ngāti Kahungunu and the strong relationship between iwi and the winery has remained.

As the winery approached its centenary, John Buck searched for a way to mark it. His is a family of booklovers and communicators, so something literary would perhaps have always come about. But it was a throwaway comment from MP Doug Graham at a wine industry dinner in Wellington, that “there would never be a New Zealand poet laureate” that pricked John’s ears up.

There had been infighting within the literary scene around the time, leading to the loss (before it even began) of a writers’ residency in London, and, John says “Parliamentarians had had it up to here with the literary community, and Doug Graham just said that, and for me it just went DING!”

Bill Manhire was announced as the inaugural Te Mata Estate Poet Laureate at the winery’s centenary dinner in 1996 and the laureateship came into being.

John Buck is a kaumātua at Matahiwi, and his involvement there, and as a board member alongside Tom Mulligan on the Hawke’s Bay Rugby Union at the time meant that along with conversations within the publishing and literary community and with wine writer and friend Keith Stewart, he was also in discussions with Tom as to how to give the award a true home from which to spring.

Matahiwi Marae was that true home from the beginning and still remains the base today. The involvement, Tom says, is a permanent feature and a highlight on the two-year marae calendar. There is also an expectation from the marae that the poet laureate will create a poem inspired by Matahiwi during their term.

Tom hosts the welcome and the ceremony during the inauguration weekend, and to read accounts of other poets laureates is to learn of the fantastic warmth extended by Tom and the wider marae community towards the poet laureate and their family and supporters. He also selects the person to bless the tokotoko, which each poet laureate is presented with at their inauguration weekend. 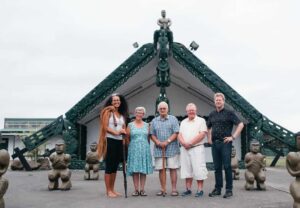 Haumoana-based artist and designer Jacob Scott creates an individual tokotoko for each laureate, and the home of these tokotoko is Matahiwi, further deepening the marae’s role in the laureateship.

Currently Jacob is working on Selina’s tokotoko, while she has possession of the matua – master – tokotoko, which otherwise is held at the National Library. Selina took this tokotoko with her on a recent trip to Samoa and presented it to former head of state, His Highness Tui Atua Tupua Tamasese Efi, to ask for his thoughts on it.

“He immediately said well in Samoa this is the to’oto’o – the orator’s staff. And it is always paired with the fue, the fly whisk.” Selina has with her a fly whisk, and demonstrates the flicking, satisfying movement of Samoan orators.

As John Buck says, “Language is at the base of all our communications, and it needs to be promoted and celebrated.”

Selina has handed over a small collection of items to Jacob, to help inform her tokotoko, including the fue and a special piece of pounamu from colleague Jim Peters, provice-chancellor (Māori) at the University of Auckland.

“Selina has picked up the kaupapa of the whole thing really strongly, and is really activating these relationships, so that’s got a lot of promise for the process,” says Jacob. “And she’s gone and done her own research too, and made the connection back in Samoa with her whakapapa.”

The tokotoko Jacob has made for previous laureates have each been highly individual, and often collaborative. “I’ve asked each of them what story they’d like told, that might be their own story, their family’s story, their whakapapa, what’s important to them.”

Hone Tuwhare was a good family friend of the Scotts’ so that was an easy relationship to work from.

“Hone’s was a bit of a joke one,” says Jacob. “I thought I’d take the opportunity to get a lifetime supply of Te Mata wine for Hone, so I made his as a dipstick, and the idea was to have John give him a barrel of wine instead of bottles, and he could order another one when it got down too low!”

Jacob had to get to know those who followed in order to be able to make the pieces. Elizabeth Smither’s was reminiscent of a gearknob out of a Holden. “I liked getting to know her,” says Jacob, “She was into all that retro stuff.” 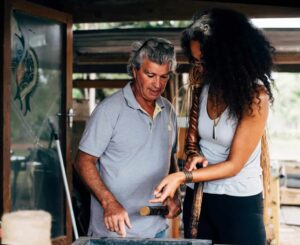 Jacob and Selina in Jacob’s workshop.

Brian Turner’s was made like a hockey stick to reference his sporting history – he played hockey for New Zealand and comes from a sporting family.

Michelle Leggott was having problems with diminishing sight, so Jacob says, “It made sense for hers to be sort of utilitarian, so she could use it to help guide her way. It was made out of a pool cue.”

Cilla McQueen’s was made from driftwood she and her friends found down south, and it has her 100 most-used words on attached ribbons. It was Bill Manhire who sorted through her writing to find the words.

Bill Manhire’s inaugural one contained the story of Te Mata Estate and the locale, and was made from wood from the original Te Mata wine press.

“We’d always kept government in the loop, and always known that when the time came the National Library was the appropriate organisation to hand it over to.”

Conversations with the National Library management, and two ministers for the arts (Christine Fletcher and then Judith Tizard) led John to sit down with then-Finance Minister Michael Cullen who was able to see the benefit of keeping the laureateship going.

“It was announced as part of the budget – along with roading and everything else – this bit of money set aside for the Poet Laureate. I’ll always remember that,” John says.

The National Library took on the administration of the laureateship, but embraced Te Mata and Matahiwi’s involvement, and the relationship remains strong.

While John is still closely involved with the laureateship, his son (and sales and marketing manager at Te Mata) Toby has a large role in keeping up Te Mata’s link with the award. An accomplished writer himself (winner of the Katherine Mansfield prize at the BNZ Literary Awards in 2014), Toby is part of the advisory committee which presides over the appointment of the laureate.

“It’s a committee of six to seven people, and the one constant is Peter Ireland from the National Library,” Toby says. “He has a great feel for the tone of everything, and great vision.”

The panel gathers to pore over the nominations which come from the public, former poets laureate, universities and publishers from across New Zealand.

It’s an interesting process, Toby says, but a difficult one. There can be over 50 nominations and each one must be given fair due.

“It’s really hard, especially once you get narrowed down to the top names, because there are all kinds of considerations. It’s not a lifetime achievement award; it’s not the ‘best poet’ in an academic sense. The Laureate has to be a statesperson for poetry. They have to uphold the prestige of the position, and a really big part of it is generosity towards other poets, and the ability to speak about other poets and other work.”

The great pleasure he finds in this is seeing how each of these poets interpret the brief of the laureateship. 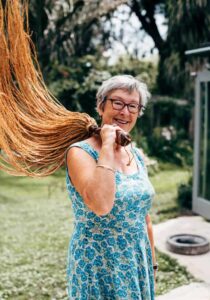 Writers in Wineries Trustee Marty Smith – also a respected poet – takes a turn with the fue.

“I really feel that every poet who has been chosen has brought something really different, which is great – everyone changes the laureateship each time, it takes on the characteristics of the person,” Toby says.

Selina seems to have been fitting the bill since before she was appointed last year, having argued fervently on Radio New Zealand for Sam Hunt to be the next Poet Laureate. And she’s looking forward to joining with the other poets later in the year for a special event.

“They’re great when they’re all together,” John says with a smile, “they’re just great fun, and they spark off each other wonderfully.”

Selina and the former Poets laureate (and their tokotoko) will return to Hawke’s Bay for an event at the Readers & Writers Festival which runs alongside the Hawke’s Bay Arts Festival in October. Selina also plans to lead a workshop with local rangatahi to develop stories to express and supplement the beautiful murals at Matahiwi Marae which depict the region’s unique history. Such a big part of the purpose of the laureate is, she explains, to help bring poetry out into the wider world, into places where poetry doesn’t always live.

“I’m hopeful that we can empower people to express themselves through poetry,” she says.

Bringing her poet laureateship home to Matahiwi not just for the inauguration, but also as part of her poetry outreach sounds like another powerful way to keep these relationships thriving, and to keep the story evolving.

Tickets for the April 14 evening event ‘Poets’ Night Out’ will be available on Eventfinda, Beattie & Forbes, Plaza Books and Libraries.

To follow Selina Tusitala Marsh’s journey as NZ Poet Laureate, you can read her blog at poetlaureate.org.nz