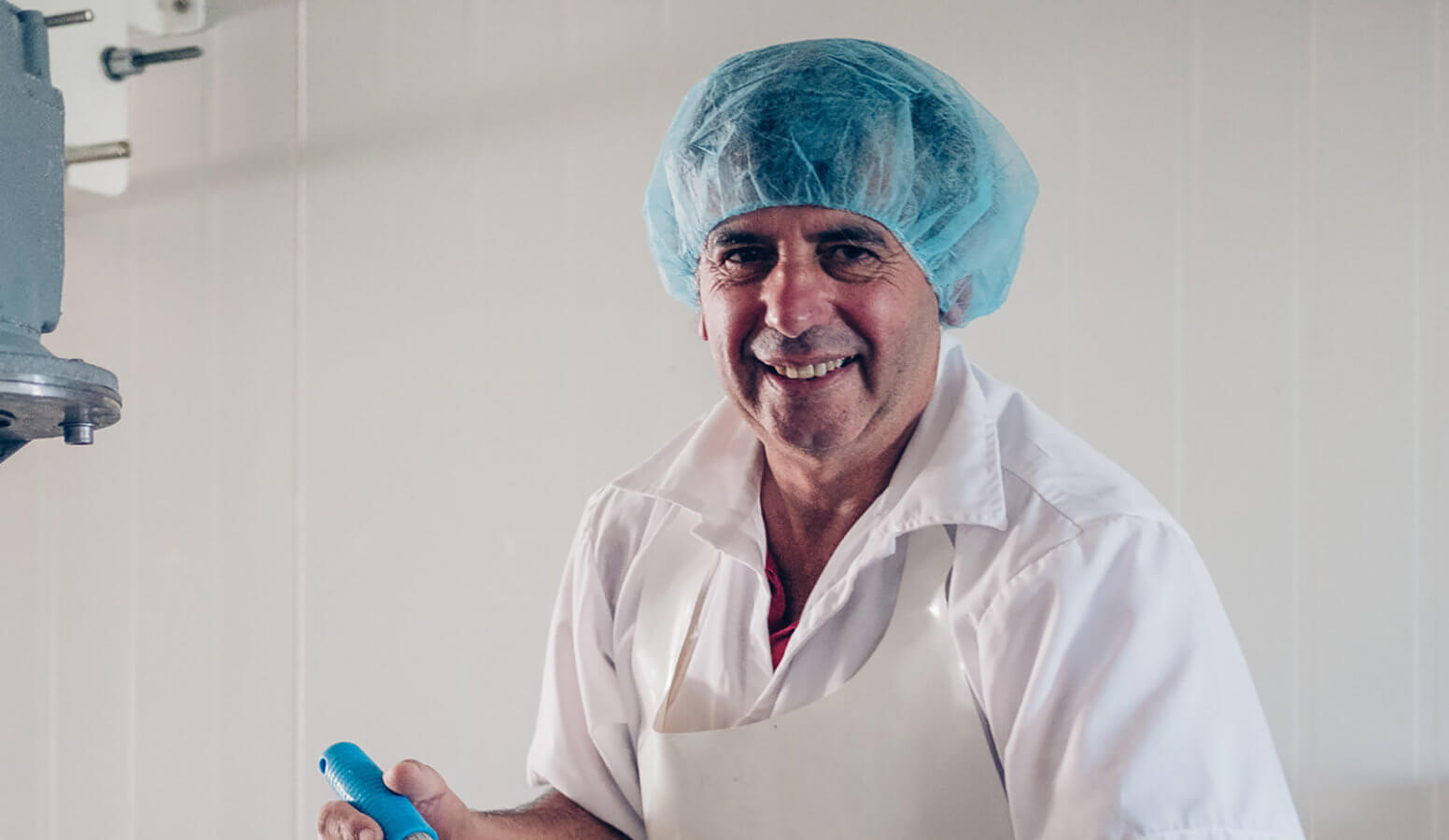 Artisans abound in the Bay creating foods by hand, all made by traditional methods. As gourmands seek out that which is irresistible and authentic, we are fast gaining a reputation as the ‘go-to’ region for very fine fare. And so we begin an occasional focus on artisans in the Bay. 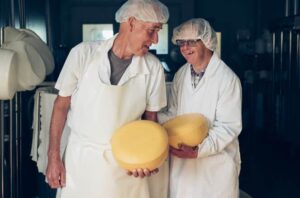 Cheddar. Cottage. Parmesan. Romano. Brie. Blue. Gouda. Edam. An amazing number of different styles, textures and flavours of cheese are being churned out in New Zealand. Considering cheese is all made from the same basic ingredient – milk – it’s even more astonishing.

It wasn’t always that way of course. There was a time when cheddar was pretty well it. Thanks mainly to a British decree resulting from the need to conserve milk during and after the Second World War, which ordered that only long-life, easily transported, factory-made cheddar was to be made from cow’s milk.

It may not have been Hitler’s primary aim to subject millions to a somewhat cheerless cheese, but that decree had a reverberating effect, particularly in the colonies. Even in New Zealand cheddar was pretty well the only cheese of choice. Albeit as variations on a theme. Remember Chesdale? Triangles, slices, blocks – all of an instantly recognisable rather rubbery texture, meticulously wrapped in foil or plastic. Along with Marmite, almost a Kiwi icon! 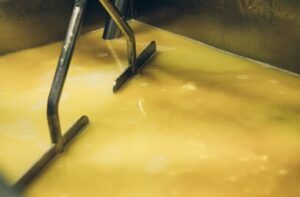 Fortunately, though it has taken a few decades to recover, the NZ Champions of Cheese Awards are a testimony to the fact that we are today producing some of the most innovative and delicious varieties ever to grace a cheeseboard, with numerous variations and characteristics including colour, aroma, texture, flavour, firmness, mould, ‘eyes’ or gas holes as well as keeping qualities. Artisanal cheeses produced by hand using the traditional craftsmanship of skilled cheese makers. As a result, they are often more complex in taste and variety. And many are aged and ripened to achieve certain aesthetics.

In recognition of this maturation, the NZ Champion of Cheese Awards were initiated in 2003. The event now has up to 300 entries with about 2,000 tonnes submitted to an extensive board of around 28 judges from New Zealand and overseas. 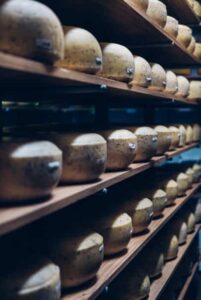 Hohepa ranks right up there amongst those handed accolades annually. Their first entry in 2007 won them the national champion Feta category. For a cheesery which had only expanded into the commercial market the year prior, it was an indication of their unique approach. Multiple medals have followed. This year they gained a Gold Medal for their Vintage, a Silver Medal for their Tasty, and two Bronzes for their Fenugreek and Biodynamic Blue.

Head cheese makers Inacio Guimaraes and Peter Hargroves self-effacingly put their success down to the Demeter milk used in production. Which is a valid point. Unique to the Bay, the farm has some 46 hand-reared Shorthorns which graze on a lush herbal pasture on the salt marshes and river banks of Clive. Hohepa HB has practised sustainable organic farming since the village was established in 1960 and is regarded as a leader in bio-dynamic farming practice.

There is no doubt this contributes to the complexity and character of the cheeses. But of course skill in cheese making is what ultimately produces the quality and flavour for which Hohepa cheeses have gained such recognition.

Inacio has been with Hohepa for 26 years. Coming from a dairy farm in Brazil, for him bio-dynamic farming was a norm. “I was very aware of the herbs growing which made the milk from our cows have a unique flavour.” He studied agriculture in the UK specialising in bio-dynamics, where he gained a scholarship to Emerson College. Here he met his New Zealand wife. After returning to Brazil to fulfil his scholarship requirements, “we had friends in New Zealand so we decided to come here”.

“I started as a volunteer at Hohepa which I did for three years. I became very interested in cheese making and so we started in a simple way, with one cheese vat.” Originally the cheeses were produced for the residents. He attributes much of the Hohepa cheese rise to fame to internationally-recognised cheese expert, Juliet Harbutt (who now lives in the Bay). “She tried our cheese at the Farmers’ Market and stated it was the best cheese she had tasted. At the time she was writing a regular column for NZ House & Garden and she featured us in several articles.”

That was the kick start. Parents of some of the Sutherland Trust attendees realised that there was gold coming out of the cheesery; they decided to invest in the shop and raised funds for the cheesery. So in October 2007 it was established. “We increased the herd and won our first medal in 2008 for feta,” says Inacio with a happy smile.

He explains that initially they were making what Hohepa itself needed which was Danbo and yoghurt and mozzarella. Now of course the range has become far more extensive. “The plain more mature cheese – cumin, herb and garlic – are mainly what we sell as soft cheese. The tasty to vintage and the blue are very creamy and fruity.” 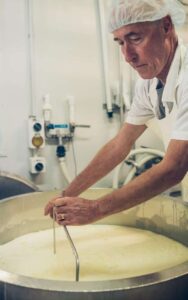 There is no doubt Inacio is passionate about his profession. When he talks about it his eyes light up and he admits that he even sings to himself when he is in the cheesery. “Our cheese is good because of the way we farm. It tastes of this land. You can make a mild cheese in eight weeks. But wait, if you can wait, in eight months you get something rich, complex, powerful. I like powerful cheese.”

In 2009 Peter Hargroves joined Inacio as head cheese maker and together they developed the range even further, winning two Champion of Cheese Supreme Awards with Herb Quark and Tasty in 2010. “Each year we always grab something,” comments Peter. “And as the judges change every year you depend on what their preferences are. We decide which ones we will put forward, but you never know whether it’s the more mature or the younger ones they will like. For the awards we select cheese for tasting a few months before until we have the right ones to send.”

The Tasty received high praise that particular year from the master judge Russell Smith, who declared it was “an absolutely stunning cheese. It’s beautifully aged, and in the Danbo style. The front palate is very fruity with a lovely nutty finish. It also has a long finish.” The quark too was a hit. “The tanginess works beautifully with the subtle herb flavour and is just so fresh. It has a beautiful clean finish on the palate. Gorgeous.”

And expert Juliet Harbutt confirms the recently-awarded gold for their Vintage is particularly well deserved. “The original recipe was Danish, but Inacio made it his own. It’s buttery and sweet initially and becomes more like cheese sauce as it ages. At the grand old age of twenty months it becomes hard and dense with very complex flavours released when in the mouth.”

Hohepa farm in Clive, which houses the herd, is over fifty years old and about fifty acres in size. Both Inacio and Peter are sure that it is the combination of the sea influence on the grasses and herbs with the salty soil and the bio-dynamic methods and treatments used which offer something very special. Residents help feed and milk the cows daily.

Explaining how he got into cheese-making, Peter laughs. “It was a bit different to Inacio. I was a Yorkshire lad, ex-Merchant Navy. I came to New Zealand after visiting Australia in 1973, met my wife (in Napier) and decided to stay.” He went to Hamilton.

“And of course everyone knows that in the Waikato farming is the backbone. I worked for NZ Co-Op and started making milk powder. Worked my way up the ranks; 43 years I’ve had in dairy. And I studied micro-biology in Palmerston North while I was with the company. We went back to York to a great dairy farm, St Helens – one of the biggest around. Did that for 17 years. Then 13 years ago come this September we came back and I went to Te Mata cheesery.” In 2009 he joined Hohepa. 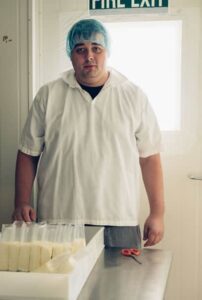 Jacob Osborne, cheesemaker in the making

He and Inacio are both head cheese makers with specific responsibilities in the cheesery, and together they have built Hohepa’s reputation as one of the finest cheeseries in Hawke’s Bay … if not New Zealand. They specialise in the softer cheeses like Danbo, and Cumin is their biggest seller.

“Our big responsibility is to ensure we don’t run out, so the output is monitored accordingly, both seasonally and dependant on weather,” Peter explains. “We have about six tonnes of cheese in stock and we process 157,350 litres of milk a year so that equals 20 tonnes a year of hard cheese, plus fresh milk and fresh cheese. It takes three months to make a danbo with four or five months to mature; 18 months makes it a tasty; and the vintage comes after 18 months to 3 years. It is housed in 10-12 degrees and once packed it is stored at 3 degrees. And once we start making a cheese we can’t stop until the process is finished. We do put out a certain tonnage per year, but remember we are one of the smaller cheese makers.”

So what is the secret that makes their cheese so good? Both agree on this, “To start with you need a good herd, a good dairy farmer, and good grass. A variety of herbal pasture equals Demeter milk.” Season too plays its part. “For us spring to early summer is the best time to make a winning cheese.” But, they laugh as they reveal perhaps their most surprising secret in making great cheese. “It’s the good hand of the cheese maker. That’s why we have big hands!”

Both Peter and Inacio acknowledge that Hohepa is unique. Maybe it is the sea influence on the grass, the salty soil or the bio-dynamic treatment. Or all three. But for sure, with a hefty amount of artisanal skill also in the mix (including the importance of large hands), this boutique cheesery is definitely something of pride for the Bay.