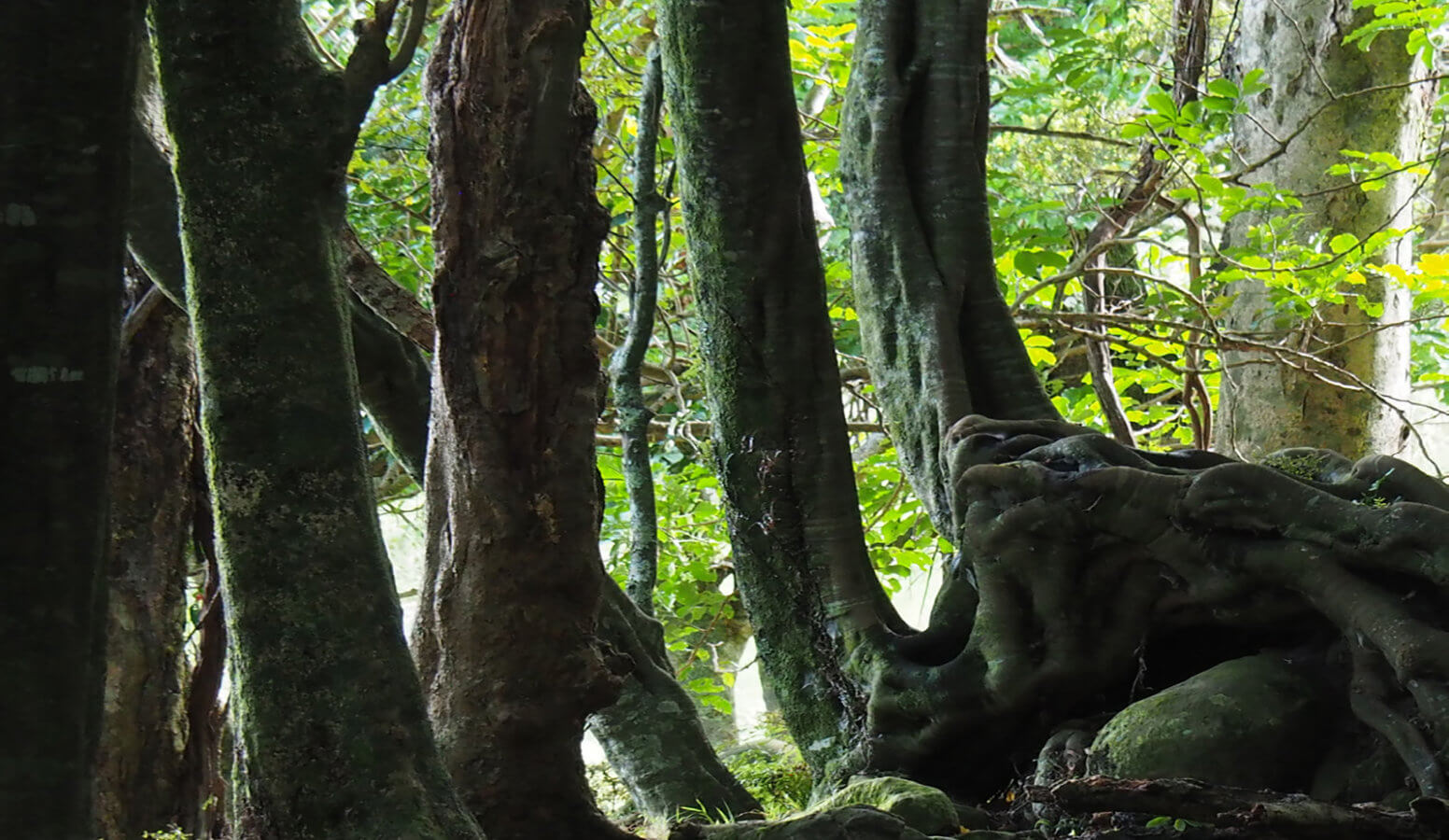 The world is infinitely complex and so full of trillions of details that our limited minds can’t begin to comprehend it all. So the natural human solution is to simplify things in order to make sense of it. We create boxes, such as ‘landscape’. Within that box are a series of smaller ones, like forest, and inside that New Zealand native, and inside that coastal native …

From a distance, a coastal forest may look like the image on the right. 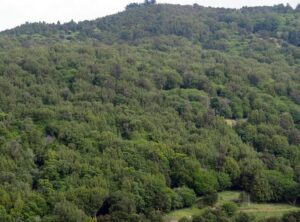 I come to think that this view – which I see every day – says it all, that I know exactly what goes on inside it, that I don’t need to go there again. But then I do go, and every time it astounds me in its diversity. I wander for hours, aimlessly hither and thither, completely entranced by the world around me.

For a start it is not just one sloping hillside, as it appears from a distance, but full of secret hollows, of gullies and ridges with piles of boulders. But the greatest diversity is in the trees and other growths. This is not like a European beech forest or a North American conifer forest. Each shift in the terrain reveals a new habitat with quite different trees, and within each of these there will be several varieties of tree. Then there are the other growths, the incredible vines that climb up or down the trunks, and all the various ferns and ground floor plants.

I think that this is an important lesson for us: we look out at the world and at the people in it and think that we understand things, that we have made sense of it in our own way, that we have created our own set of boxes. But the deeper you delve the more you realise how incredibly complex everything is, how little you actually know. Which is fine of course, because we can’t know it all – as long as you understand that and don’t believe that your simplification does say it all.

So let’s take a look at this forest and see why it is so special, but so close to dying. All these photos were taken within an area no larger than a square kilometre.

At the bottom there is a small but vital remnant of podocarps. It is needed by the birds in their feeding patterns with its variety of berries. Here there is kahikatea and rimu, interspersed with some pittosporums and māhoe.

The hillside is seeping with a series of springs that create wet areas, where pukateas grow. They are a remnant from the time when the climate here was more tropical. With their buttress roots they look like something from Fiji. The vine kiekie also thrives in the wet. Part of the Pandanus family, it too has tropical connections, and like all pandanus it is a great source of weaving fibre. Kiekie starts on the ground and grows up a convenient tree. As the plant expands it sends down a mass of roots.

This is predominately tawa and tītoki, with some kaikōmako and karaka.

Tawa has a lovely pale timber which I have used to make furniture.

Tītoki seems to be able to contort itself into incredible shapes, but can also grow tall and straight.

Kaikōmako starts life as a low matted ball of twigs with tiny leaves. Then after many years a leader will suddenly appear at the top and a whole new tree will grow up with quite different larger leaves. A few NZ trees grow like this but no one really knows why: maybe it is to protect the vulnerable juvenile stage from browsers or frost.

Karaka may have been planted in orchards by Māori living here because its bright orange fruit were a regular part of their diet.

Higher up there is a much more open area of mānuka and kānuka, with a vivid green floor of ferns. Generally these trees act as a nurse crop for slower growing larger natives which will take over, but here stock grazing has kept those trees down and so the mānukas and kānukas have been able to grow tall.

Here also are some nīkau palms and some fully mature lancewoods, which are not often seen; we are more familiar with the drooping, spear-leafed juvenile. 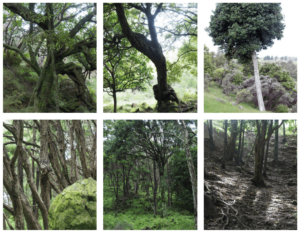 A dominant feature of this hillside is the dense canopy of kohekohe stands. So little light gets in that the forest floor has no growth, covered only in rotting leaves and branches. It is made even darker by the clusters of epiphytes wedged high up in the trees. Kohekohe is unusual in that its flowers and fruit grow directly out of branches.

Sometimes rewarewa will break through the canopy and tower over it. It has a lovely bright red flower which presumably explains why it is also called NZ honeysuckle, because the European honeysuckle creeper has a similar flower.

What fascinates me most up here are the various climbers that make their way up or down the tree trunks. Partly it is the anthropomorphic response to seeing the tight embrace of the climber twisting and wrapping itself around its host. There has been debate about whether this is a destructive relationship or not. In Europe vines like ivy will smother and kill a tree but here it seems there is a better balance.

Some vines like rata, supplejack or lawyer sprout in the soil and climb up. Rata can also happily exist just rambling over the ground. Many other smaller ones do the same.

If a puka seed falls on the ground it will become a bush, but if it lands up a tree it will send down a root which becomes a heavily ribbed vine, while at the same time spreading its foliage upwards.

The one that intrigues me most is the astelia. These can happily grow into large true epiphytes lodged in the canopy, reliant only on the rainfall that they collect. But then there are some that have sent down an enormous root to become a much larger mass of heads which is now a hemi-epiphyte. High up the root can be as big as the tree, but it gets smaller as it descends. It also puts out a dense network of fine wrappers to hold it to the trunk. If the tree eventually dies and falls over due to the shear weight of its load, then the rooted astelia will die. Yet a smaller one living separately without a root lives on.

But this forest Is dying

Because the tenant farmer grazes stock here, and because of the abundant feral goats, this forest is dying. The naturalist Geoff Park came here a few times before his death and was aghast that such a precious remnant of coastal native bush was uncared for. 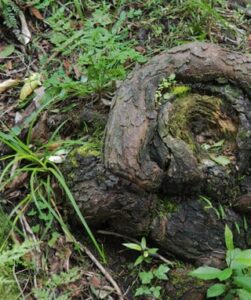 Now this is really interesting (above): the trunk must have gone a long time ago to leave only the small rotted remains in the centre (the two māhoe seedlings are separate). Yet around it there is the bark of a living tree. To live a tree needs sugar created by photosynthesis in leaves, so how can this stump still be alive?

He gave it ten years, but so far he appears to have been unduly pessimistic. However, there is no doubt that it is dying, because no seedlings are allowed to grow. In a healthy forest old trees will always fall over but there will be a mass of small trees below waiting for the light and space to shoot upwards. Here there are some tiny seedlings but by the end of the winter they will all be eaten.

I started by saying that this forest is, at close quarters, far more complex than it appears. But it is even more so beyond the reach of our eyes. Underground the tree roots interconnect, allowing the trees to communicate and share nutrients. Even more amazing is the dense network of mycorrhizal fungi whose fine threads link up tree roots that cannot reach each other. They can supply the trees with nutrients and minerals that the trees themselves are unable to process. They can transfer water to plants in dry areas and sugars to stumps like this. It is what gives the forest the strong resilience of a community.

But this is the sad part: it is always possible to plant new forests, but we cannot also replace the network of fungi. Tree seeds can be dispersed quite far, quite quickly, but not so fungi which can only migrate very slowly. If this forest dies, so does its fungi and it will be many hundreds of years before a similar forest could ever be re-established.

New Zealand is starting to recognise the ‘rights’ of nature. What are the rights of this forest? Does one farmer have the right to graze it to death? Does the Māori Land Court have the duty to think beyond stock units? Does the complex and disorganised system of multiple land ownership have the right to do what it wants with its land?

TOP ROW LEFT TO RIGHT: A rata vine growing up the tree. Puka hemi-epiphyte growing down. A kohekohe hosts two rata vines on this side of the trunk, and on the back an astelia root.