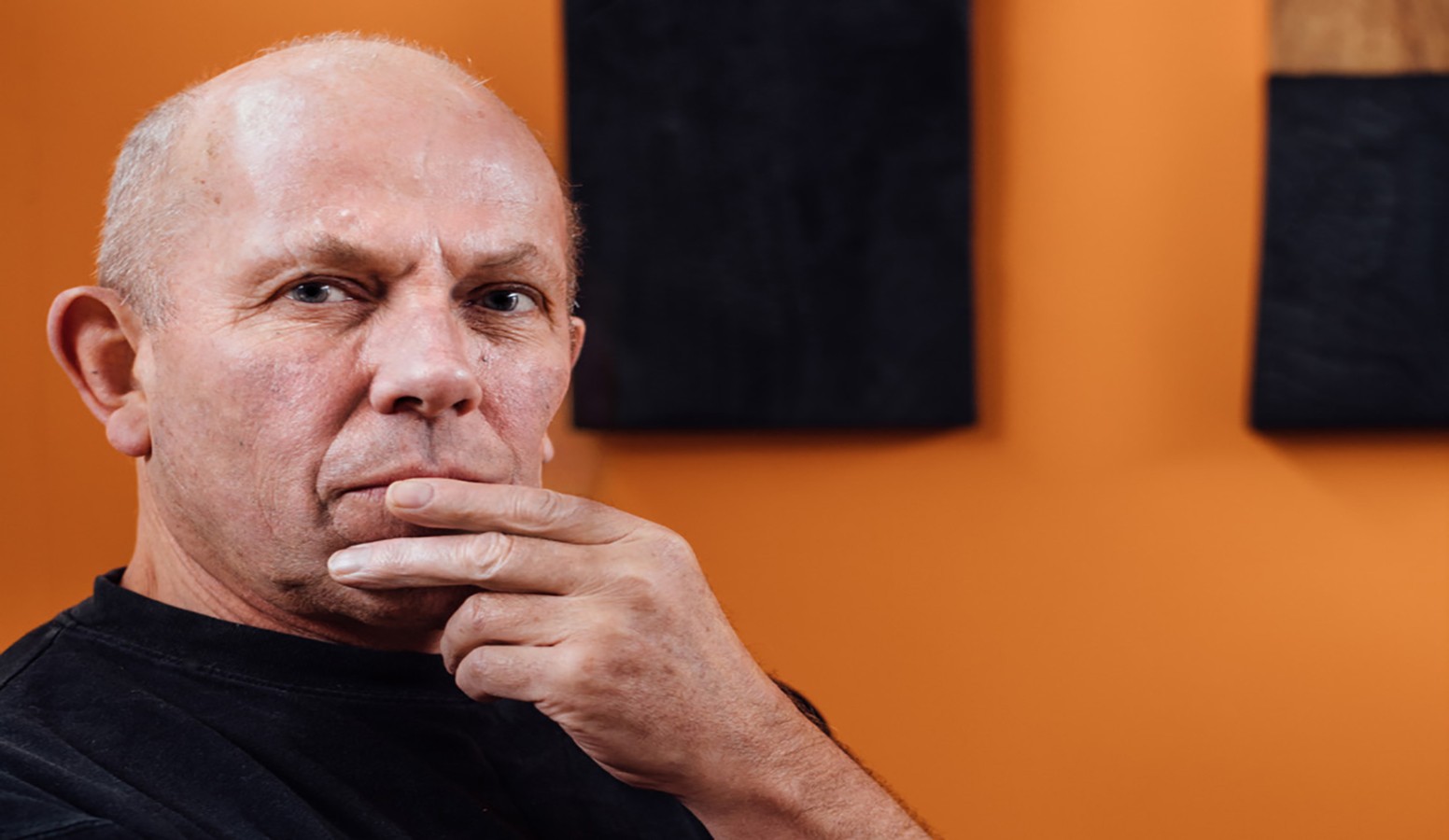 In today’s world of mass manufacturing, artisans are acquiring a newfound recognition for fashioning the unique. Particularly so in carpentry where the trend for natural materials is offering craftsmen a chance to create contemporary homeware. Wood is definitely in focus for interiors as woodworker Peter Maclean has discovered. 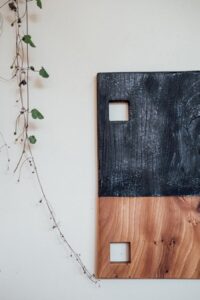 He probably came to this realisation earlier than most. Coming from a long line of farming folk in Te Aute/Pukahu, Peter remembers his grandfather as being an “inveterate fixer – well it was after the war so necessity was the instigator”. He passed the gene on to his grandson, “though I had two and a half years at Uni studying anthropology and sociology, which I do feel stood me in very good stead … and I did enough maths to allow me to balance the books. But it turned out that I wasn’t an academic. I have much more of a kinetic bent.”

“We also had four kids on our farm and we learned to be self-sufficient pretty quickly. If something needed painting, you painted. If there was a leak you fixed the plumbing. And though I really loved Uni – enjoyed getting an education and learning, particularly in liberal arts for which I will be forever grateful – a degree is just a bit of paper and when a couple of my friends dropped out I went with them and started working with young unemployed kids for a year or two. After which I started working with wood.”

“Badly,” he laughs, “and quite badly for some time. After five years I made one or two things I was pleased with. Probably it was terrible, but nevertheless it pleased me.” 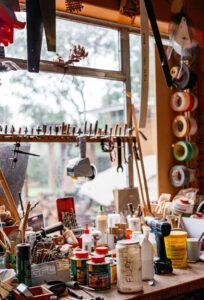 Tools of the trade in Peter’s workshop

He confesses that because he “knew nothing, I just worked with the wood at hand. And in the ‘eighties that was mostly NZ native timber like rimu, kauri, mataī and stuff I would find in demolition yards – which you can’t do now. I had no money so demo timber was an effort to get, but it was cheap. I’d be there where warehouses were being knocked down at 5 a.m. when the protestors were still in bed. Now a lot of those natives have been cut down; I still have a fair bit gathered, but as the industry moved to woods like American Oak I found it to be a timber I liked and I now use a lot. It’s tough and quite different to NZ timber.”

His workshop in Clive divulges much about the craftsman. Dappled light filters through multiple windows onto an array of workbenches and tools; old furniture waiting to be restored; the patina of newly polished chairs – dining, sitting, indoor, outdoor; chests of multiple shapes and sizes; small side tables, dining tables of varying dimensions; and a multiplicity of boxes. The odd child’s tricycle hangs from the ceiling revealing an inquisitive imagination that’s ever experimenting with the innovative and the unexpected.

A woody scent pervades along with the inevitable shavings dusting the floor. Some of his machinery is 50 years old. “Nothing sophisticated … one or two power tools that are high tech.” It is here Peter fashions his bespoke furniture, each piece unique and carefully created according to a client’s or his own vision. His hallmarks are simplicity and a sleek shiny oil polished finish evoking that of the Mission and Shaker styles. 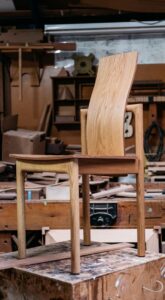 He says he didn’t attempt a chair until the late eighties. In the beginning it was wood turning. “I found some old kauri table legs and started from there. Took the finished result to the A&P show [‘Pete hits the big time’, he comments wryly]. Sold it and then got two more orders. It was a bit Colonial in approach, but I was very aware of the Shaker and Japanese style of simplicity – an Arts and Crafts look which focused solely on wood. No steel. No plywood. And generated my own designs.”

He enjoys the craftsman-client connection. And puts communication down as an essential part of his skill set. “Much of what I do is commissioned, and being interested in what people want is vital. I do a lot of bespoke work and, if you’re an artist, being able to discuss ideas to ensure you produce the vision – theirs and yours – plays a vital part in the end result … Something happens when you respond to a brief. It takes the maker and the customer to another place. When that happens, it’s very satisfying.”

And he’s observed that things do happen in phases. “Last year I said to my associate Dominique [who works with him three days a week … ‘remarkably gifted’, comments Peter], I don’t think we’ve made an armed sitting chair for a year. Lots of dining chairs, little boxes and big boxes. Then within minutes of having uttered those words a client comes in and wants a set of chairs. Well originally they wanted a table, very simple; then the chairs developed. I usually suggest sitting in a shape to try it for comfort. This one got the right reaction – it was VERY comfortable. And it was sympathetic to the table.” 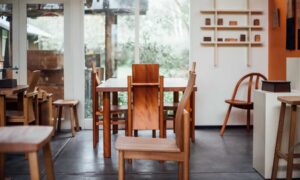 Peter’s finished works of art in his showroom.

He says he does surgery occasionally and is happy to fix an old chair. But originals are his expertise. “Reasonably early I developed a liking for making chests, which are really just big boxes. They’re not necessarily designed for anything exact, but they fulfill a lot of uses. You can sit on them, stow a multitude of things – sheets, towels, blankets, precious papers. I love the notion of a box or chest containing something but it’s not specific. What’s it for? Not really for anything in particular, but a lot in general, specially with a couple of drawers at the bottom.”

Peter’s pleasure comes from ensuring the wood is the hero. And oil finish is just about all he uses … “layers and layers of it”. Steel wool, dry sand and a lot of elbow grease are the extras in the equation. He’s not a great believer in a spray finish … “You pay a lot and I’m not entirely convinced it’s the best.” His own belief is that the wood should be given a chance to shine. “I’m not influenced at all by fashion. And over the years I’ve had about 120 different woods in the workshop. It depends on how it performs, what it looks like, and I’ve found a lot of not very well-known woods, which aren’t necessarily very commercial but are great if made into little boxes.” Which are indeed works of art.

He believes that good design “is not necessarily expensive. You can get a lot of house for a little bit of money. You just need a selective eye for the visually appealing.”

Naturally he is conscious of how his furniture will sit in situ. Not surprisingly his personal taste in architecture is Modernist … “I think my work fits in them well”. He names John Scott as his ultimate architect. A sure mark of his pure artisan’s appreciation for the work of a purist.