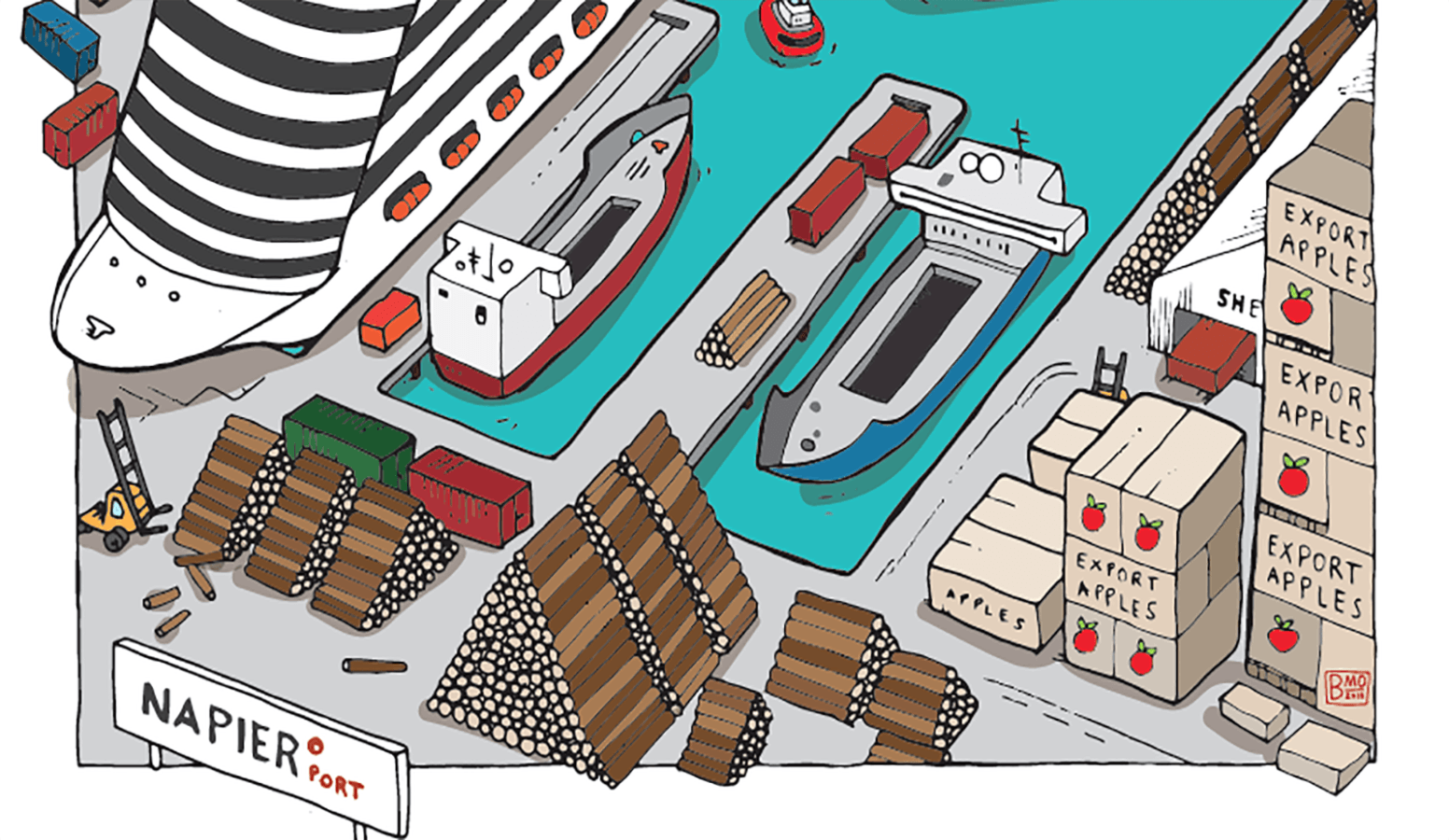 “Napier Port is proudly owned by the people of Hawke’s Bay. The Regional Council is committed to keeping it that way,” declares HBRC’s ‘Our Port’ consultation document.

Err, well they’re 51% committed to keeping it that way. The HBRC are actually suggesting they would sell down up to 49% of their shareholding in the port in order to facilitate an eye watering $320-350 million of investment. This investment is needed for the endless stream of cruise ships visiting our fair city, but even more so for the rapid growth in exports that is forecast.

The industry I know best is apples and it is on a roll. The new intensive growing systems are at least 25% more productive and some new apple varieties like ‘Envy’ are inherently more productive too. There is a wall of fruit coming.

Already there is a lot of posturing in the press. Anna Lorck is pushing for a referendum, arguing a decision of this magnitude warrants a voter mandate. Opponents rightly point out that a simplistic yes/no vote has severe limitations. Firstly, it all too often degenerates to base ideological beliefs and the answer would be an emphatic NO. Secondly, they point out that there are options, some of which may be more palatable than others.

Chairman Rex Graham outlines the reality that “the port does not have capacity to borrow to fund this growth without requiring additional funding from ratepayers or taking debt to imprudent levels.” I fear he is right. Rates would need to be increased $956 on average per ratepayer and given their other ambitious projects and associated rate rises, it will be a hard sell.

The port company is actually owned by the Hawke’s Bay Regional Investment company, which carries the asset on their books at $238.4 million. So the investment they’re recommending will result in a port worth at least 2.5 times what it is today. It’s extremely ambitious and it needs to be.

You see, the shipping business has changed a great deal in the past decade. We used to think of big ships as carrying say 4,000 containers, but now they are building them with as much as 20,000 container capacities. As the modern ships get bigger, the smaller older ships are being retired.

The key factors in this new age of larger ships are the depth of the draft and length of the wharf. The HBRC seems certain that the proposed investment is necessary and the productive potential of Hawke’s Bay totally justifies this view. “The Port remains the region’s single biggest economic enabler” they say, and in this regard the statistics don’t lie.

International shipping companies are an arrogant breed. Unless they are well serviced, they won’t come. Most of them are strongly supportive of port consolidation and they would love to cut a few ports off their schedule. Less stops are more efficient for them and someone else can suck up the inland shipping costs, the traffic congestion and the increase in road fatalities.

What offends many is that the Port is currently 100% owned by the Regional Council and people are horrified that such an important strategic asset may fall into the hands of nasty, private sector profiteers.

Naturally, I’m horrified that it’s currently in the hands of nasty, public sector profiteers. You see the HBRC have been milking the old cow quite hard in order to subsidise rates. In the last year the port has paid a dividend of $10.7 million, about 20% of the Council’s revenue. Over the years the Councils have found this subsidy (lowering your rates) a hard addiction to give up, and thus have greatly undermined the ‘retain full ownership’ option. If the port had retained its profits for the last decade or so, it would not have $86.6 million in debt and would have a more attractive balance sheet.

It’s strange how people who love public ownership talk of governments as ‘we’ or ‘us’. Self interest motivates many of the participants in these entities the same way it does in the private sector. In any event, it’s widely believed that governments are good and noble, while the private sector is selfish and evil.

The truth is that governments have been the over-achievers in war, genocide, torture, monopoly exploitation, corruption, nepotism, greed and all the other deadly sins. Power corrupts.

The private sector do have some nasty players, which you read about in the papers, but most business owners are good citizens and decent employers. The key advantage they have over the public sector is a bigger pool of talent and they’re often stumping up with their own money. Get it wrong and your career comes to an abrupt end. To succeed in the private sector you are more likely to develop a skill set that is better aligned with say, owning a port.

The port is unquestionably a regional strategic asset of the highest order. In a country with relatively high costs of land, labour and capital, we need to make the most of our advantages.

The two that are critical to Hawke’s Bay are our relatively cheap and abundant water supply and our ready access to the port. In many continental situations the inland freight costs are as much or more than the seafreight. Moreover seafreight is about seven times as fuel efficient as trucks and you can navigate oceans in their natural state while inland transport requires expensive and unsightly roading and rail networks. Get it on a ship quickly and everybody wins.

A partial sharemarket listing is the Council’s preferred model. They argue that will optimise the port’s value now and in the future, while retaining operating control. Minority shares will be widely dispersed and this dilutes the power of individual shareholders. It also makes it relatively easy to issue new shares and to raise further capital in the future. The key deficiency with this option is that investors will come from predominantly outside of Hawke’s Bay and will prioritise the dividend yield over strategic regional objectives.

As I’ve said before, I’d prefer a share placement with local exporters, whose key motivation would be to achieve the service levels they need from their port. A constitutional cap of 5% should be put in place in order to make sure no single shareholder could become too powerful. If this measure is put in place, I don’t really care if they sell 49% or the whole lot. I know I’m in a minority here.

What should reassure you about private sector investment in our port, is that it’s worked exceptionally well for Tauranga. The Port of Tauranga was little more than a fishing port in the 1960s, but the berths were open and accessible and it needed less dredging than Napier. Dairy, timber and kiwifruit ensured the port grew rapidly. Tauranga has always had a commercial mindset and it has been stealing business from a ponderous Ports of Auckland for decades. So the evidence is there that a mixed ownership model can work.

I’d stomach any of the proposed funding models in order to get the job done. To not press forward would likely condemn the Napier Port to a slow decline in shipping companies servicing it and ultimately consign it to becoming a second tier feeder port. We need to make the difficult call now and to accept that however uncomfortable it is, the community will look back in 100 years and be satisfied we got it right.